World of the Living Dead

DEVELOPER Ballardia PLATFORM PC, Mac, Linux SYNOPSIS World of the Living Dead (WotLD) is a Javascript and text-based massively-multiplayer zombie game which features strategy gameplay and life or death resource management in a huge sandbox world. WotLD is a persistent browser-based game and utilizes Google Maps. Much of the gameplay consists of moving or performing […]

World of the Living Dead

Secret of the Solstice

Developed by DNC Entertainment for Windows. SYNOPSIS Secret of the Solstice is a Free-to-play MMORPG (Massively Multiplayer Online Role Playing Game), which features a cute, anime-inspired visual style. Player characters, monsters, and non-player characters (NPCs) are represented as 2D sprites while environments and background elements are rendered in 3D. BACKGROUND is set in the fantasy […]

Secret of the Solstice 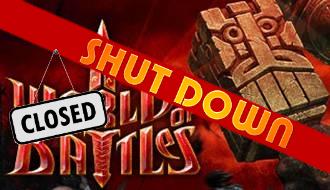 Developed by Frogwares Games for Windows. SYNOPSIS World of Battles is a free-to-play massively multiplayer online real-time wargame in a fantasy setting where up to eight armies, each one made up of as many as 16 units (with each unit featuring up to 30 individual soldiers!), clash in exciting player-versus-player battles. In addition to the […]

Developed by Gaia Interactive for internet browsers. SYNOPSIS Gaia Online is an English-language, anime-themed social networking and forums-based website. It was founded in 2003 as Go-Gaia.com, but the name was changed to GaiaOnline.com in 2004 by its owner, Gaia Interactive. Gaia originally began as an anime linklist and eventually developed a small community, but, following […]

Developed by Sealmedia for internet browsers. SYNOPSIS Desert Blitz is a browser based mmo which makes you the supreme commander of your nation’s troups. Build a base and provide weapons for your army to test your skills against thousands of online players on four game servers. Your forces consist of infantry, motorised units, tank units, […]

Developed by Seal Media for internet browsers. SYNOPSIS Castle Fight is a free to play browser based MMO featuring Palestine in the 1109. Christian crusaders fight among arabians to control the land. BACKGROUND Palestine in 1109 Year of our Lord. As Pope Urban II called the Western World to the First Crusade with the words […]

DEVELOPER Blue Byte PLATFORM Internet browsers SYNOPSIS Silent Hunter Online is a browser-based free-to-play strategy simulation game in which you command your own flotilla of historically accurate recreated submarines. Being an innovative and dynamic campaign in which individual successes impact all other players through asynchronous gameplay, the “Battle of the Atlantic” during World War II […]

Developed by Wisecat Inc. for Windows. SYNOPSIS MLB Dugout Heroes is a 3D Baseball game with animated graphics and an authentic roster of American & National League players and teams. Players chose a league, a division, and a real life team but can later swap in other players to create a unique roster to test […]

Developed by Entropy and Roja for Windows. SYNOPSIS Eternal Lands is a free MMORPG (massively multiplayer online role playing game) currently under development. The game is now in Beta stage, but that doesn’t mean it’s incomplete. It’s currently fully playable and we are constantly working on adding more things to do, more items to make, […]

GAME TYPE: Free to play MMO Strategy PLATFORMS: Web Browser DEVELOPERS: Ubisoft GAME SYNOPSIS In Panzer General Online players get to build up and command their own World War II forces in battle against competitive AI or players from across the world in exciting turn based duels. Using a variety of units, everything from infantry, […]

DEVELOPER Bigpoint PLATFORM Internet browsers SYNOPSIS Ruined Online is a 3D, browser-based, action third person shooter game where players fight in a competition to become the ultimate villain. It uses the unity engine and boasts an array of impressive features; such as high-end graphics, visual and sound effects. You must hack, slash, and shoot your […]

Developed by Petroglyph for Windows. SYNOPSIS Mytheon is an online, free to play, multiplayer action/RPG with strategic game play where players experience classic mythology come to life and challenge legendary gods to define their own fate. The setting and storyline incorporates well known mythologies from around the world — starting with Greece and Egypt, with […]

Developed by Eya Soft for Windows. SYNOPSIS Legend of Edda is a free-to-play hardcore PVP MMO, with a deceivingly cute interface. The game features fast-paced intense battle featuring a lot of very powerful PVP, and large scale RVR battles. Based on the Greek mythological conflict between the Gods of the Olympus and the Titans, Legend […]

Developed by ShangHai-headquared WeiQu for internet browsers. SYNOPSIS Pirate Chronicles is a next generation browser-based mmo game with historical fantasy, RPG, city-building, business and strategy elements. Players can start the game immediately without installing any client or plug-ins, and the game can work on any platform that has a browser, even on an iPad. Players […]

GAME TYPE: Free to MMO RTS PLATFORMS: Web Browser DEVELOPERS: Ubisoft GAME SYNOPSIS In EndWar Online players are able to align themselves with either the Russian Spetsnaz, the U.S.A. Joint Strike Force or the European Enforcers, three of the few remaining organisations that are left after the events of World War III. In this browser-based […]

GAME TYPE: Free-to-play Football MMO PLATFORMS: Web browser DEVELOPERS: Nexon GAME SYNOPSIS In United Eleven players are able to form their very own football team where they can acquire players, transfer them and train them up as they work towards playing various other clubs created by other players from all across the world. United Eleven […]

GAME TYPE: Free-to-play MOBA PLATFORMS: Windows DEVELOPERS: BigPoint GAME SYNOPSIS A free-to-play MOBA, Shards of War takes the traditional elements of the MOBA genre and ads their own spin, creating an exciting, action packed game. Stepping away from the classic fantasy themed MOBA Shards of War is a futuristic themed game with a number of […]

Developed by one2tribe for internet browsers. SYNOPSIS The Witcher: Versus is an entirely free-to-play Flash-based multiplayer browser game which takes place in the universe of “The Witcher” without being bound to the original computer game. You begin the game in Kaer Morhen, where you must first choose if you want to begin the game as […]

Developed by Hithere for internet browsers. SYNOPSIS Age of Ocean is a browser based MMO which it transports the player back to the romantic Age of Sail. The player can choose their home port from over 300 ports in 24 countries and begin trading thousands trade goods on over ten thousand trade routes. With hundreds […]

Developed by Acclaim for internet browser. SYNOPSIS Age of Lore is an online browser based RPG where players play as wizards attending a magic school. Players can explore the world, fight through dungeons, learn new spells, and more. GENERAL Players control a wizard at a magic school, and must advance their character through the story, […]