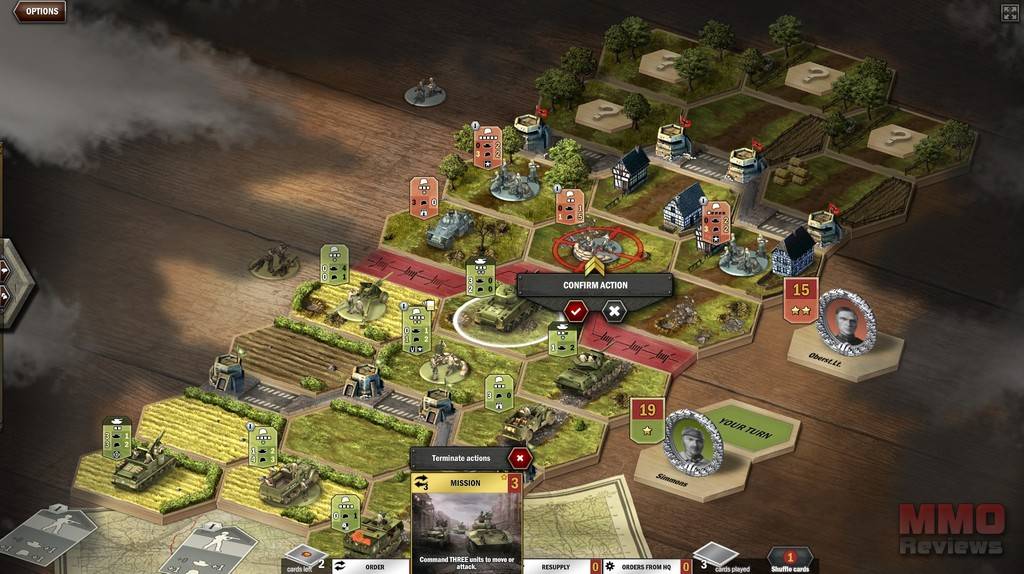 In Panzer General Online players get to build up and command their own World War II forces in battle against competitive AI or players from across the world in exciting turn based duels. Using a variety of units, everything from infantry, tank’s, trucks and more, players can combine their attacks with strategic command cards that allow tactical manoeuvring around the battlefield to try and outsmart your opponent and seal victory for yourself. The game is completely free to play with optional micro-transactions in the game shop to purchase “card packs”as with a traditional card collecting game, this stunning looking MMO can also be played directly in your Internet browser.

The primary focus of the game is a mix of a collectable card game and a turn-based strategy whilst wrapped up in a tabletop seemed board game with the battle map made up of hexagonal pieces linked together on top of the table and units taking the form of little miniatures. Players can play through the PVE campaign mode, which consists of over 150 missions split between the choice of German or American forces and takes place during various historically inspired events of WW2 such as the Battle of the Bulge and the Normandy landings. Alternatively players can go up against each other with their built deck’s of units and cards for some strategic one-on-one PvP duels.

As with a traditional card collecting MMO, which are typically fantasy themed, were players would normally gather monsters and spells in Panzer General Online players collect military units and command cards. These units and cards can be unlocked during gameplay by completing PVE missions, through in game currency that is acquired when playing in PvP mode against other players and can also be purchased with real-world currency (a similar business model to Ubisoft’s other collectable card game Might & Magic: Duel of Champions).

Units come in various forms from infantry, artillery, trucks, tanks and other miniatures/cards each with their own abilities and stats. Each card has an attack value, that can either be against infantry targets, armoured targets both (if unit does not have an attack value against a unit type, e.g.

Rifleman have no attack value against tanks, then that unit cannot damage that type of enemy). As well as this units also have a counter-attack values, when you attack an enemy with an appropriate counter attack value it will do damage back on the attacking unit. With a variety of units available players can build a truly personalised deck once they have unlocked their preferred troops.

As well as units players must also put command cards into their deck, these cards allow a player to perform actions with their units and cost a number of command points to use it as determined by the individual card. Command cards allow such actions as an Order, which allows a single unit attack, an Operation to allow two units to attack, Fireteam, which enables two infantry units to gain more shields/armor as well as such cards as Resupply to give the player more command points. There is a unique selection of command cards available for players to earn two build up their strategy.

THE KEY TO VICTORY

There are two ways to win a game; destroy all the enemy units or deplete all the enemy General’s Command Points. Units on the battle map, which consists of three columns, can typically only attack an enemy directly in front of them (although some specialised units allow attacks anywhere on the map) so the key to success is switching between lanes and stacking defensive and offensive units as you try to whittle down the enemy units. Alternatively players can try to deplete the enemies Command Points, whenever there are no units in the enemy’s column and the player has a direct line of sight to their command base at the back of the lane then the player can attack and do damage to the general equal to the number of hit points the unit has left. This damage comes off the enemies Command Points (which is also depleted when spending Command Cards), once the General reaches zero then they lose the game.