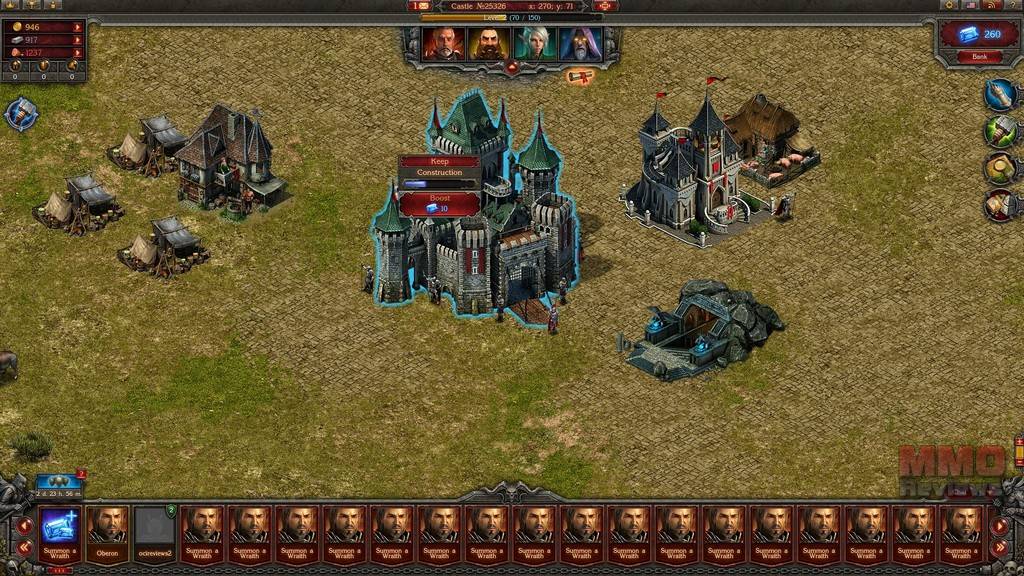 In Stormfall: Age of War you take on the role as a fledgling Lord with your own Castle tasked as the fall of the Empire has left feuding warlords fighting out amongst one another to try and claim what remains of the crumbling land. This f2p browser-based strategy will see players using diplomacy, conquest and tactics as they compete against other players or work cooperatively to create strong alliances.

You have been tasked by the great Lord Oberon to fortify your own Castle in preparation for the war ahead against the Hordes of Balur and the rival Lords that seek to claim what is left from the remnants of the great fallen Empire of Stormfall as battle all across Darkshine consumes everyone.

One of the main functions in Stormfall is the ability to build up a Castle on your own land and developing it into a defensive keep that will protect your assets and the populous you have sworn to protect. Inside your walls you will construct buildings to improve your resources, research technologies to advance your Empire and raise mighty armies to both defend your properties and wage war on your enemies.

To advance your Empire you must turn to the aid of your scribes and mage is who spend days and nights poring over ancient tomes and scrolls in the hope of unlocking their mysteries. By discovering the secrets of the Lost Arts Lords will unlock a variety of new buildings that they can construct, forgotten unit techniques and the use of mythological monsters and siege weapons. The ancient scrolls are unlocked daily by your scribes and used to learn new technologies and secrets, however players also have the option to buy and trade these scrolls with other players.

There are three main resources that any Empire will need to get ahead: iron, food and gold. Each of these are used in different ways, such as constructing buildings and creating weapons for your troops, purchasing items and scrolls from the marketplace (as well is any resources you may be lacking) or using food to fill the bellies of your soldiers to keep your army marching. Resources are mainly gathered through constructing buildings that will in turn yield them, such as farms and mines, but for those Lords with a large enough army they may consider looking elsewhere for the goods that they require. By attacking enemy fortifications, including rival players, you are able to pillage resources if your attacks are successful. Similarly if you are more passive in your conflict you may simply wish to avoid bloodshed and use diplomacy (even the threat of an attack can sometimes work) or turn to your allies for help and trade among them.

There are many different strategies that a Lord may try to employ, where some seek only bloodshed and focus on raising a mighty army to sweep across the land and take what they wish through conquest, others prefer diplomacy and trade and aligning themselves with other powerful Lords. Regardless having a strong standing army is the key to victory, whether used aggressively or to defend your own land managing your assets and resources are the key to your survival. Players need not worry too much about being wiped out of the game to a early, those registered for three days or less are given player immunity where they cannot be attacked unless they have made the first strike, if to users that are of him playing for less than three days end up fighting each other then their war against each other will continue indefinitely to commission Mark.