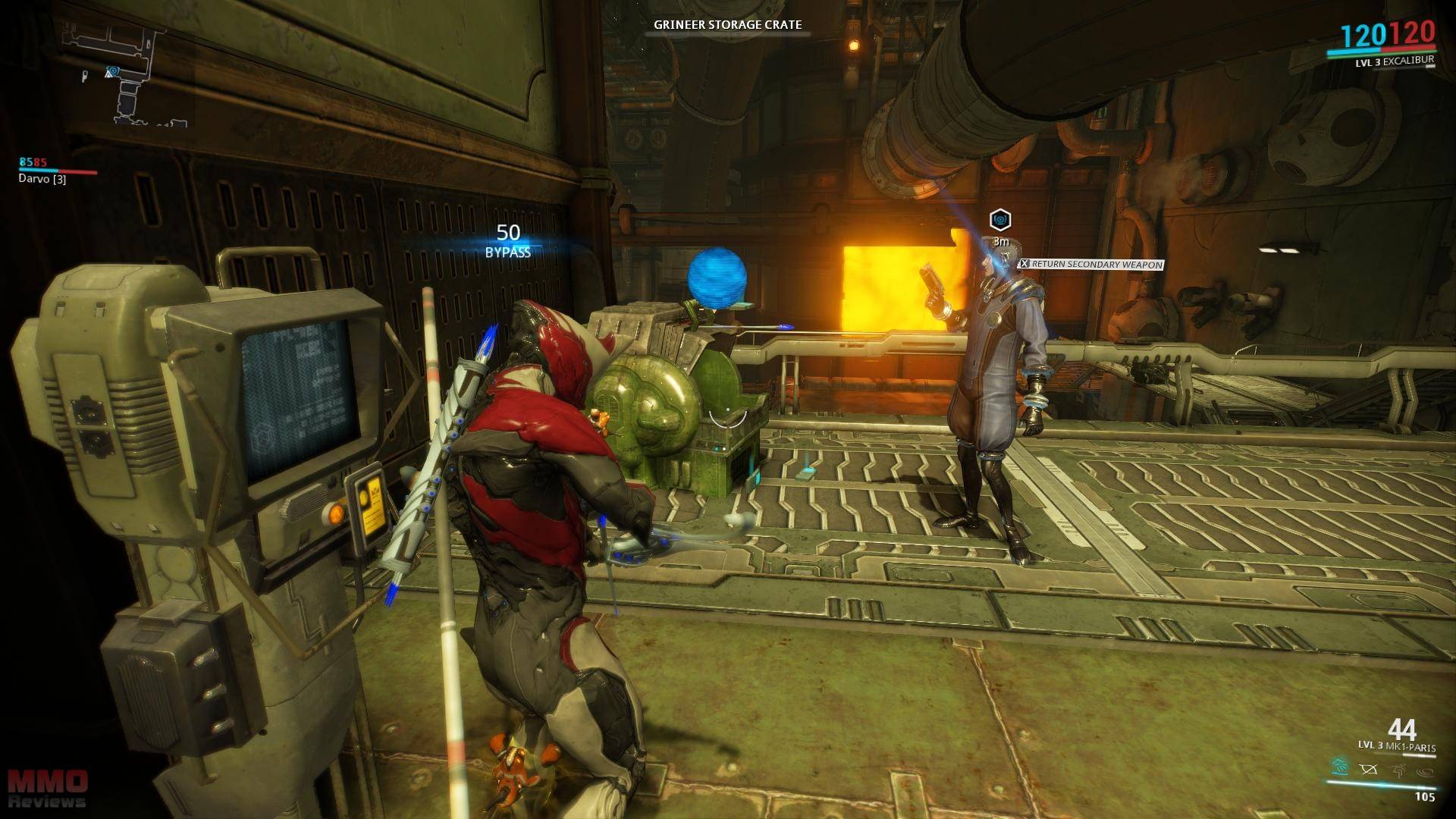 Warframe situates players as members of the Tenno race, newly awoken after years of cryo-sleep into a solar system at war. They have discovered an ancient exo-skeletal technology only they can operate and provides them with unimaginable power and skill. Reborn into a corrupt era, the Tenno are sought by the oppressive Grineer Empire for annihilation.

Tenno - The Tenno are descendants of an ancient and mystical civilization of lost warriors from the Orokin era on Earth. Preserved in cryopods for centuries, the Tenno now awaken to a new war, fighting and resisting warring factions as the sole bearers of the Orokin-created Warframes.

Grineer - Once the Grineer rediscovered cloning technology, they seized control of Earth through sheer numbers and expanded their vile empire from Earth outward to all sectors of the solar system. But their army is in bodily decay and their features are increasingly primitive as a result of continuous cloning. As such, the Grineer are forced to use technology as a crutch for their genetic deterioration.

Corpus - The Corpus is a dominating proto-corporation of humans that maintains and operates the trade routes of the Solar Rails. While controlling the entire supply chain of goods that flow through the solar system, they are rarely seen by others and are better known for the robot proxies that serve for them.

Warframe exo-armour uses unique combative technology to create the ultimate weaponry. The Warframes hold many mysterious powers and mastering one requires dedicated use.

Players are able to choose from more than 20 different playable Warframe characters; these are some:

Vauban - The highly tactical Vauban uses his powers to create deadly traps that can zap, imprison and dimensionally crush enemies.

Saryn - Saryn's venomous attacks are terrifyingly effective against organic and synthetic enemies, and her ability to "shed" her skin makes her very elusive.

Trinity - Trinity does great in supportive roles. Warframes with healing technologies are rare making Trinity a great equalizer when the odds are stacked against the Tenno.

Volt - Volt can create and harness electrical elements and therefore is a high-damage Warframe perfect for players who want a potent alternative to gun-play.

Ash - Ash is great for players looking for a more stealthy approach to combat. Lethal abilities are complemented by powers of distraction.

Nyx - Mind control and psychic attacks make Nyx a very dangerous foe. Her ability to reach into enemy consciousness and manipulate their behaviour can turn the tide of any battle.

Ember - Ember is a nightmare for light-armoured targets. Ember can super-heat the air which opens up surprising crowd-control possibilities.

Excalibur - The perfect training Warframe: the Excalibur suit allows players to explore the power of Warframes with a balanced set of capabilities.

Mag - With full command of surrounding magnetic energy, Mag is an expert at enemy manipulation. She’s a perfect choice for those who want to deal heavy damage in unconventional ways.

Rhino - Rhino is the heaviest of all the Warframes. His strength enables him to combine a mix of devastating offensive attacks with formidable defensive powers.

Loki - Loki offers a variety of reconfiguring abilities. The abnormality of Loki's powers allows players to manipulate the battlefield.

The game features a wide variety of unique weapons. New ones are added on a regular basis. Amongst others, players may choose between the following:

Skana - Before all other weapons, Tenno master this simple blade that becomes immensely powerful in the hands of a master. For Tenno, it is the foundation of their fighting style and a pillar of their culture.

MK1-Braton - A versatile weapon that can be customized to support a wide variety of play styles, the MK1-Braton is the standard issue rifle for all Tenno.

Paris - Based on one of the world's oldest weapon designs, this Tenno-crafted compound hunting bow utilises a chargeable magnetic field to launch arrows capable of impaling enemies to walls. Paris can be used both in stealth and in open combat.

Lato - The Lato is a highly accurate semi-automatic pistol used by Tenno everywhere.

Kraken - The Kraken is a heavy pistol of Grineer design that fires quick two shots with a single pull of the trigger. Its deadly accuracy is appreciated by skilled marksmen.

Viper - The Viper is full-auto pistol known as the most compact and lightweight weapon of the Grineer arsenal. It possesses a very high fire rate and ultra-fast reload times thanks to a simplified magazine design.

Gram - The heavy two-handed sword known as Gram requires great strength to wield, but it is notorious for its splitting power. It can hit multiple targets with each strike.

Ankyros - A pair of mighty gauntlets, the Ankyros were designed by the Tenno for close quarter combat. What they lack in range they make up for in speed.

Glaive - Dating back to the time of the first Tenno, the Glaive is a uniquely deadly weapon. This multi-bladed disc is not only effective for melee combat it can also be thrown like a boomerang to cut down enemies at a distance.

The game offers an individually designable Dojo to all players belonging to a clan where they can train themselves and do some research. Clan members contribute resources and are able to create special rooms in order to research new technologies for additional weapon crafting. In one-on-one combat against other clan members, they will train their skills.

Later on, players will be enabled to create their own levels, this way contributing to a player-built future of Warframe.