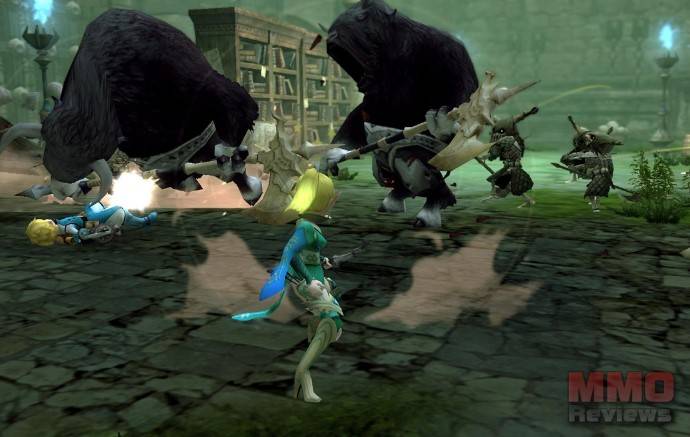 Developed by Eyedentity Games for Windows.

Dragon Nest is an online action role-playing game. Actual gameplay involves adrenaline-pumping, high-speed combat with visually stunning attack combos. But, at the same time, it also incorporates an epic storyline and role-playing elements of both classic RPGs and MMORPGs alike. You follow the character through a third-person, over-the-shoulder perspective, and when in combat, you engage the enemy in a style reminiscent of first person shooters where many attacks are directed in front of the player through crosshairs.

Control
Dragon Nest applies the WASD-mouse combo, a traditional control for first-person shooter games, which allows the player to quickly change views and move more fluidly. Unlike other massive online games, Dragon Nest does not place the character in the middle of the screen, but rather slightly to the left. This gives the player an over-the-shoulder perspective, which allows easier recognition of enemy movements and locations.

Socializing
Players of Dragon Nest will often find themselves gathering in towns to form groups, selling the spoils from their adventures or even socializing and making friends. Progression takes place as a player levels up and clears through each chapter of the story. As a character becomes more powerful, more options become available, including player-versus-player (PVP) “NestWar” combat, where multiple parties may do battle against one another. For those who truly crave epic battles, “Dragon Raid” allows players to cultivate a party in order to slay the most fearsome creatures in the game—dragons!

Experiences of Mind and Might
Beyond destroying all nearby enemies, players are also forced to solve specific puzzles to advance. Such puzzles include opening a specific door or activating an instrument or device. The creatures of Dragon Nest also go beyond the typically-expected threats, both in species and their scale. Some present challenges with uniquely created monsters beyond the player’s immediate field of view, seeking to harm players from the air and/or the ground.

In addition, the geography itself plays a factor during combat, with the ability to knock enemies off the walls or ground and other obstacles in order to perform successive combat combos. When combined with party-fighting, this creates a constantly evolving player-versus-environment experience.

Community Focus
The towns that connect the world of Dragon Nest are set in unique locations that become unlocked as you advance the story and power of your character.  Features like Dragon Raid and NestWar also help to promote community. Players may speak to anyone nearby in town or to their party in the 3D environment. Additional methods of communication such as game mail helps to strengthen the interaction and bond between players.

Archer
The agile elven bow master rains arrows upon her enemies from afar, but when things get too close, she’s completely capable of handling the situation with powerful kick attacks.

Warrior
Wielding powerful, two-handed weapons and specializing in close-range combat, the warrior is undoubtedly a dangerous and intimidating character in the battlegrounds.

Cleric
This spiritual character commands healing abilities to keep himself agile and employs lightning magic to smite his foes. Even with his magical proclivities, he can more than hold his own in physical combat.

Sorceress
Unleashing powerful spells to conquer her enemies from a distance, the mystical sorceress is the prime spell-caster of Dragon Nest.
As players progress through Dragon Nest, they can further specialize their class by choosing different paths of discipline.