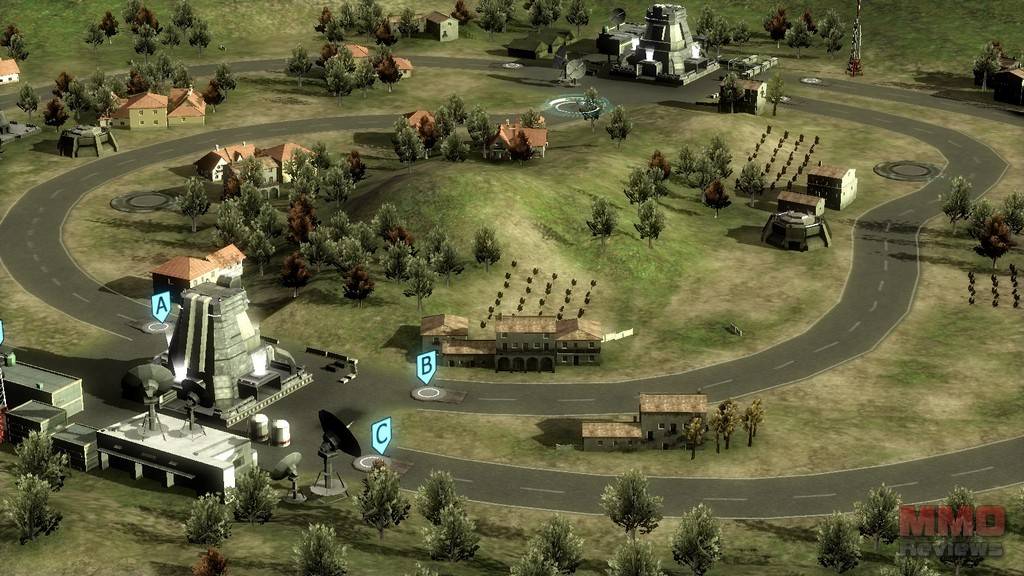 In EndWar Online players are able to align themselves with either the Russian Spetsnaz, the U.S.A. Joint Strike Force or the European Enforcers, three of the few remaining organisations that are left after the events of World War III. In this browser-based free to play MMO strategy players will go head-to-head fighting over territory and resources and what little remains of this post apocalyptic world.

Set 10 years following the events of World War Three, the year is 2030 and the global destruction that follow the war between Russia, the US and Europe has left the globe and near inhospitable, barren wasteland. Pockets of resources and worthwhile territory remain and now the two mighty factions that have survived the conflict fight over what little is left in an endless war for supremacy.

The core mechanics of the game play like a classic MOBA MMO, where each player must try to dominate three lanes that link the two players races as they send wave after wave of troops to destroy their opponents headquarters. Players choose from various heroes, each of which gives access to their own personal units, and sends their troops down one of the three lanes to either try and reach the enemy base or fight defensively in response to any opposition units that have been sent to attack their own place. Reacting to your opponent what still trying to push your own tactics and strategy is the key to coming out victorious as a player is limited as to how many of their units can be placed on the map at any one time. The first player to destroy their opposition’s base is the winner.

Both players are able to choose nine generals to take into battle from a list of over 80 heroes that can be unlocked, each of which gives access to a different unit that falls into various categories: Air, Anti-Air, Armored and Infantry. The combat typically takes on the fashion of a rock-paper-scissors game where if an enemy is sending armored tanks then you can send out your air helicopter units to try and take them out, but your opponent will likely respond by sending out anti-air to deal with your helicopters. Infantry have the unique ability to occupy various buildings along the lanes such as machine gun turrets, which are powerful assets to control for pushing a particular lane.

As well as their own individual units each hero has access to special manoeuvres that can be performed certain amount of times in the game such as powerful as strikes that can wipe out unfortunately grouped enemy units and defences. Moreover each unit can be further customised by the player to change up their weapons, armour, skills and attacks which and an even higher level of strategy to both players.

Whilst the core of the game lies in the Theatre of War PVP mode, adding to the replayability factor, there is also an extensive single player campaign that players can work through that reveals the ongoing story arc of the game. Players will progress through various levels and maps, journeying across the world to different territories with 10 locations in total, each of which having 10 key battles as well as there being five available factions to play, creating a massive 500 PVE solo play quests. Unlike the persistent PVP game the PVE campaign has an actual endpoint and players can become the ultimate faction and win victory for their organization and bring the war to an end.