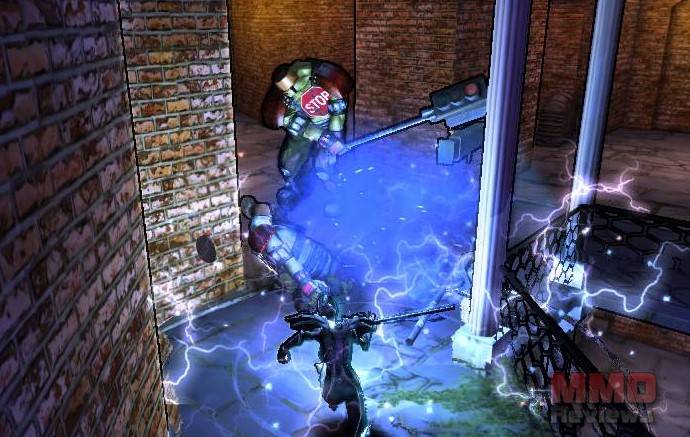 Ruined Online is a 3D, browser-based, action third person shooter game where players fight in a competition to become the ultimate villain. It uses the unity engine and boasts an array of impressive features; such as high-end graphics, visual and sound effects.

You must hack, slash, and shoot your way to become the most dominant killer in the city. The 3D action game has 6 unique villains and wide selection of sophisticated weapons so there is definitely no shortage of ways to lay waste to enemies.

Assassin
Blessed with beauty from birth, the Assassin has never had a problem turning heads, or slicing them in half. Completely focused on obtaining the finer things in life, she uses her deadly assets to increase her net worth - nothing more. She typically teases with a playful wink and a coy smile, before severing her victim's heartstrings with a well-placed knife through the chest. Sounds ugly, but it's a lot prettier when it's not you.

Mad Medic
Once a well-respected doctor, the Mad Medic is now a homicidal lunatic. Like most physicians, he started his career with purpose; he wanted to help the sick and needy. But the Elite society had other plans. At first, they asked him to stop. After refusing, they brainwashed him, transforming a once benevolent man into a twisted doctor of death. His best medicine now is a quick demise. Just hope you're lucky enough to get it.

Crawler
The Crawler doesn't view society in the same light as everyone else. Probably because he's been living in the dark the past few decades with a large group of people-turned-underground-freaks. But limited food and an increasing hunger have caused the Crawler to abandon his subterranean home for the sprawling wastelands above. Because of his poor vision however, he must rely purely on scent for survival. Meaning, the Crawler won't stop attacking until he smells defeat.

Mutant
The Mutant is a bona fide bruiser. He used to be a nice kid, but while scavenging the ruined wastelands for food, he slipped and took a toxic sludge bath that transformed his young frame into a towering monster. Look past the deformity, freakish strength, and terrible stench and you'll see a kid who wants to be left alone. Cross his path and he'll teach you a new game. He calls it "body wrecker." And it's not fun.

Samurai
While he may despise confrontations, the Samurai finishes them swiftly and efficiently. Because he believes the quicker you kill the conflict, the faster you can restore order. So why exactly is he fighting then? Good Question. No one is able to survive long enough to find out. Whatever it is though, it looks like he's willing to die for it. Not that he expects that to happen.

Enforcer
People, however, break quite easily. Especially if they're under the Enforcer's watch. Serving as a high-ranking Elite society guard, the Enforcer shows no mercy to anyone, even her own subordinates. But she especially hates the wastelands after discovering they are filled with people who don't follow rules. To her, they must all be punished. And they will be - whether they're guilty or not.