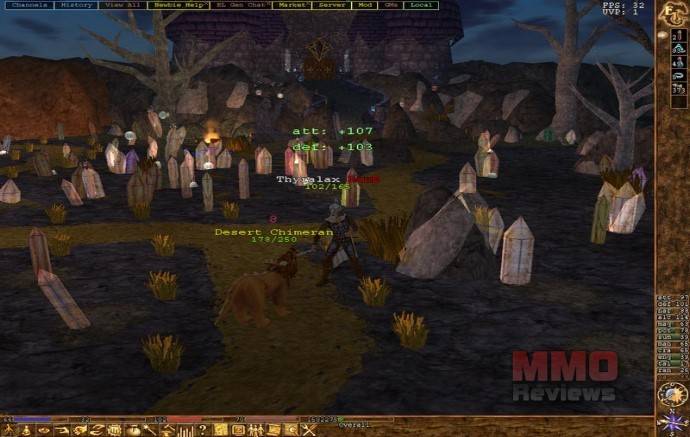 Developed by Entropy and Roja for Windows.

Eternal Lands is a free MMORPG (massively multiplayer online role playing game) currently under development. The game is now in Beta stage, but that doesn't mean it's incomplete. It's currently fully playable and we are constantly working on adding more things to do, more items to make, monsters to fight, and also improving the current systems.

- Fighting: You can fight monsters and other players, hunt animals, or join with a group of friends and take them on together!

- Harvest & Manufacture: Mine ores that you turn into bars of iron, steel, titanium and make various armor and weapons. Or pick flowers and herbs that you mix together to create potions or magical essences.

- Summoning & Magic: Summon an animal or monster to follow and fight for you! Or Become a Mage and cast deadly spells on opponents, or heal your companions.

- Roleplay with friends! There's always someone new to talk to, global or private channels, guilds to join, places to explore, all with an easy to use chat interface.

There are 6 playable races in the game. Humans, Elves, and Dwarves are playable for free. Draegoni, Orchans, and Gnomes you have to pay for.

- Humans; feel the need to create a shelter by cutting down trees, and anything else that stands in their way, and to constantly create, build, and improve things. They hunt animals for food, as well as eating the vegetation of the land. The humans take whatever they could and use it to their advantage. Although they also show compassion, kindness, and generousity when the times are right. They have many abilities and create big cities and towns.

- Elves; revere life, and are very careful not to waste things. They hunt animals in low moderation, always giving thanks to their god when they kill, and before they eat. They build their homes in the forests, in a style all their own. The Elves are very friendly to the most of the other races, but have a deep hatred for everything they consider to be evil (such as the goblins, orcs, ogres, etc.), and don't fully trust the dwarves or the Orchan(whom they consider barbaric). The Elves are very knowledgable, and harbor a great repository of historical books in libraries which they open to all, for they live lives of up to five times that of a human.

- Dwarves; stay to themselves the majority of the time. They don't travel too much, prefering the warmth and comfort of their own home to the outside world. Dwarves are excellent craftsmen. They buid the most sturdy and elaborate structures, the most accurately carved statues, and exquisite jewelry. They carve wood, chip stone, and shape metal until it is almost perfect. Because of this they generally have their homes in or around caves, building mines that they share together.

- Gnomes; are another small dwarfish race, but unlike dwarves they are outgoing social travelers. They are also pretty good craftsmen, and tailors of clothing. Another skill of their's is map making, although you can never trust a Gnome's map to be 100% accurate all the time. And not to forget their unsatiable curiosity for trying to find a new invention for one of life's many difficulties. They are probably the most helpful, generous, and unbiased of all the races.

- Draegoni; are what look to be a cross between a human and a dragon, yet much more human than dragon like. Legend says that they are children of the mythical dragon god, Iringold. They are highly magical beings that dwell in the colder regions on the extreme ends of the world. It is said that their inherent magical abilities come from the dragon blood that is mixed in their veins, and in their few scales that sparkle on their bodies.

- Orchans; were named so because they look like a cross between a human, and an orc. Whether or not they were bred that way is a commonly disputed topic, no one knows for sure. There are legends and myths going in each direction. They are a people that believe in judging someone on their strength, heroism, and bravery. They hold many contests of strength, and also elect their leaders by the competitions. Many of them are fights to the death, which the other races see them as being barbaric. They are also very honorable however, always keeping their word when they took an oath, even if it means their life is at stake.

The skills so far are: harvesting, attack, defense, alchemy, magic, potion, summoning, manufacturing, tailoring, ranging, engineering, and crafting. More will be added in the future.

P2 450, OpenGl 1.2 compliant video accelerator (it works fine on a Vanta TNT2 8MB), 128 RAM, and at least a 28 Kbauds Internet connection... these requirements might get higher/lower during the development of the game.