The Witcher: Versus score:

The Witcher: Versus screenshots: 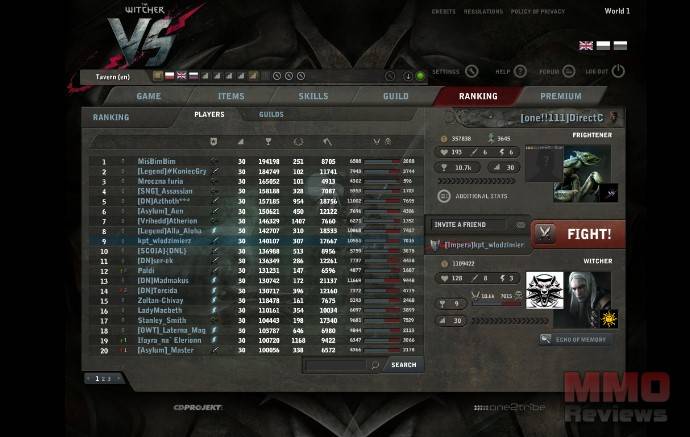 The Witcher: Versus review:

Developed by one2tribe for internet browsers.

The Witcher: Versus is an entirely free-to-play Flash-based multiplayer browser game which takes place in the universe of “The Witcher” without being bound to the original computer game. You begin the game in Kaer Morhen, where you must first choose if you want to begin the game as a Witcher Frightener or Sorceress.

While travelling through the world of The Witcher: Versus you will discover dungeons, meet NPCs (non-player characters), fight bitter duels, and meet merchants in foreign cities who are waiting to trade their rare goods with you.

Witcher
Witchers are warrior masters of the sword and have the perfect combination of speed and strength.

In the beginning the game works like an exciting interpretation of rock-paper-scissors, expanding into something deeper as you level up and make your character more powerful. Each class comes with its own unique set of attacks and defensive maneuvers, which you queue up strategically when facing off against other players.

When your opponent receives the challenge, he/she queues up their counter-sequence of attacks, magical spells, and defensive maneuvers in an attempt to come out of the encounter alive.

The Witcher: Versus game