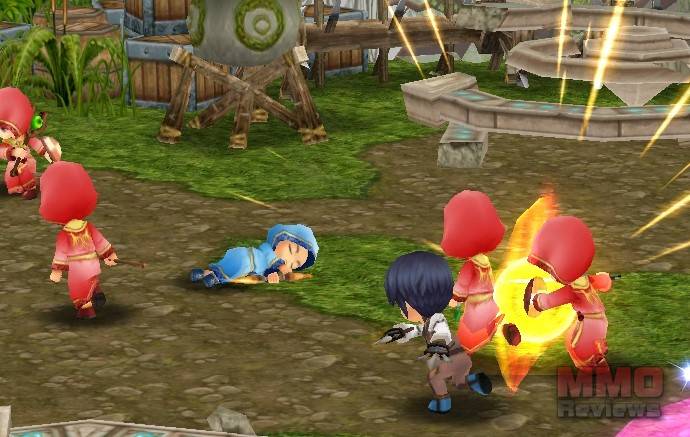 Developed by Eya Soft for Windows.

Legend of Edda is a free-to-play hardcore PVP MMO, with a deceivingly cute interface. The game features fast-paced intense battle featuring a lot of very powerful PVP, and large scale RVR battles. Based on the Greek mythological conflict between the Gods of the Olympus and the Titans, Legend of Edda takes players through a dynamic storyline divided into five unique chapters based on the conflict of two opposing factions.  Players will pledge their allegiance to the Olympus Gods or Titans from the beginning—prior to character creation—which will play a large role in upcoming PVP and RVR battles.  Fast-paced PVP battles are the cornerstone of the game and will include intense personal battles, guild battles and player-killing (PK) where opposing factions can attack each other at any time.  Additional PVP battles will include the Sacred Treasure Battle: a large scale RVR battle between followers of each god to obtain the sacred treasures and, lastly, the game features Guild vs. Guild mode, where players will battle within an enclosed battle ring.

Taking place after the great war of the Olympians and Titans, known as the Heroic Age, Zeus, the god of all gods, overthrew Cronus and the other titans and banished them to the deepest part of the underworld, Tartatus. Heroes lived among the humans but unlike them, they were descendants of gods. To seek vengeance on the Olympians, the Titans approached the heroes to overthrow Zeus and to take over Olympus. As a result, the Titans would honor the heroes with great powers equal to their own. In defense, the Olympians approached the heroes to defend them, and as a reward, they were promised immortality. Now, players taking on the role of the heroes have to choose to either side with the Titans or fighting for the Olympians.

- 4 Main Quests Types: Standard, Main Story/Scenario, Class Specific and PVP and Faction.
- An array of options for PVP: Personal duels, Guild battles, Free world player killing, Sacred Treasure Battle and 1v1 or Party vs. Party battles.
- 3 base classes, each with up to 7 possible upgrades
- Sacred Treasure Battle: Death-match PVP between 2 factions. Bonuses for winning faction, from items to buffs.
- Instanced dungeons to allow for more personalized runs for your party with numerous difficulty settings, puzzles, traps for items and exp rewards
- Comprehensive Pet System with assistive skills.
- Teleportation System with easy world roaming to maintain flow of gameplay
- Unique Monsters - Five ranks of monsters each with unique abilities and drops
- 5 grades of weapons and large amounts of customization thru strengthening and enchanting
- God power skill system, skills of the gods as rewards from Faction vs. Faction battles (stronger than character skills)
- Hero Classes, ability to change your character into a hero. Upgraded appearance, weapons, skills, and abilities

Warrior, Swordsman, Assassin, Archer, Cleric and Wizard.  Players will be able to choose their character's first class during initial character creation and upgrade to subclasses by completing promotion quests and eventually upgrading to different classes while obtaining greater and more powerful skills.