Pros: Lots of features, lots of character customization, Adventure mode is strategic and fun
Cons: Quite a dated game, repetitive “menu click” gameplay with too much automation

We saddled up recently and decided to mosey on down to InnoGames free to play browser cowboy MMO, The West. The game is a strategy meets RPG where players build up their own fearsome hombre and make a name for themselves. Over six years old now the game has been around for a while, but we thought we’d take a Back To The Future Part III style blast to the past and see how it was getting on.

The game definitely shows its age, from the graphics (which would have been pretty decent at the time) to the sound effects. Jerky animations, poor pathing across the world map (that had us walking across lakes, etc.) just lacked the finesse we typically see in more modern games. More than this the gameplay is just of a time where casual early Facebook style browser games were still hugely popular. As one of the developers earlier titles we can see the progression and advancements that have been made in the genre, albeit The West still shows InnoGames’ roots.

A rather linear progression format that is pushed on by endless menu clicks to complete automated work tasks make up the bulk of the game. Whether our cowboy was hired to pick cotton or shovel pig crap, the process was the same rote of moving to the location and clicking the start button and waiting until it was finished. For a badass hombre brought into town on the desert winds, there sure were a lot of menial tasks that our gunslinger was forced to do. 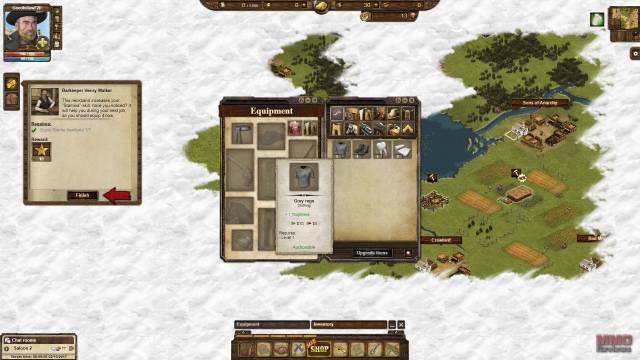 Thankfully these tasks were interspersed with some combat, duels at high noon or fighting off some fierce banditos, we did get to be somewhat heroic. The combat system is somewhat automated and consisted more of preparation and building up our cowboy; levelling up and acquiring skill points we could improve our character in different ways. With dozens of skills to upgrade it allowed us to find a balance of skills for combat and for completing work tasks, with a bit of crossover where a skill was used in both.

With combat we could fine-tune our gunslinger in various ways, making his shots more powerful, more accurate, or making him better at dodging incoming attacks. Through the tactics menu we could also choose where we would try to shoot our opponent for each of our shots, with head shots doing the most damage, but having the lowest accuracy to hit. Similarly we could also choose which direction we’d move to try and dodge where we though an opponent might attack; we’re not sure how strategic such a system is and definitely seemed more like luck unless you’re attacking the same player over and over.

Beyond the initial setup the combat system was equally as uninspiring as the travelling around the region completing work tasks as part of the fairly shallow quests. Whilst we could complete any work tasks we had the pre-requisites for, there were only ever one or two quest related work tasks at a time, so it was a fairly single-track approach to advancement. 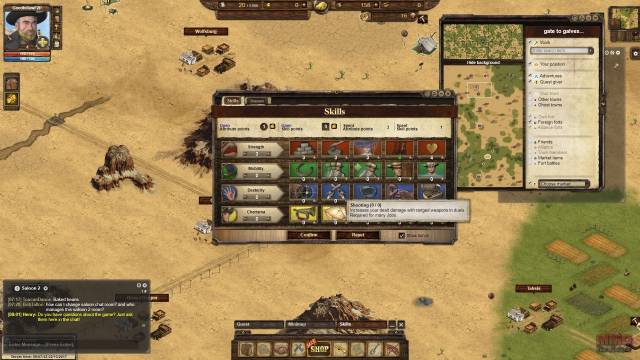 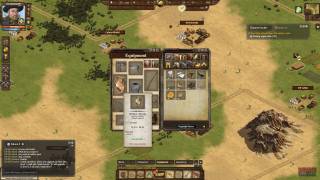 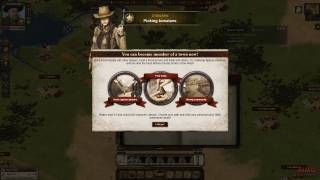 Reaching level 10 opened up some different systems, such as the Town mechanics and PVP. Towns are similar to guilds/clans and players can join a single town in the game or form their own. We checked on available open towns who would accept anyone and joined up, here we had cheaper access to some of the facilities than they would be in other towns (such as the Hotel to heal, or the Bank and its deposit fees). We could donate money into the town treasury which the town founder could use to upgrade the various buildings and improve the perks for their town members (we donated all our money into the funds once we’d finished playing).

Most importantly, for some, Towns allow players to start PVPing with each other and you can attack players of other towns. We did have to travel to the location where the defending player was, and if it was their home turf then they got a defensive bonuses. The combat acts the same, but unfortunately takes 10 minutes for a PVP duel (as opposed to the 10 seconds it takes against AI). As well as this it also consumes HP from damage taken and Stamina, making it a very limited and longwinded system.

At higher levels it does appear that The West draws players more into the various team based PVP systems, such as towns setting up their own Forts and players fighting over them. Similarly there is the “Adventures” feature, that is available from early on but is played mostly by higher level players. Adventures are a 3v3 team based point capture game, players must capture three buildings (bank, saloon, mill) by standing on them and then earning points each round for however many buildings they control.

Wanting to explore everything we could, even though we were only level 10, we queued up for an Adventure, which took just under 10 minutes in the queue (in fairness we weren’t playing at peak times). When our queue finally popped we were in a match with two players way over level 100, and a similarly matched team with two high level players and a level 12 player to offset ourselves. We had to quickly pick three skills, and with no reference of what to expect, we grabbed a DoT, a snare and an increased accuracy skill as our two higher levels went full healing.

The match loaded up and straight away one of our teammates asked us if we had played before, expected a barrage of “oh great, GG then” comments we reluctantly admitted this was our first time. Our team mate’s response was nothing but encouragement and guidance, suggesting that because of our low level we’ll struggle with combat, but we could still be the one to try and capture our closest building (the bank) and the enemies’ closest (the saloon) as the rest contest the middle building (the mill). So we did as we were advised and took the Bank, then after a few turns made a move for the Saloon whilst the enemy team all contested the middle ground and dominated early. Our teammates did suggest we were probably going to lose but not to be put off and to keep trying as it takes a while to get used to. 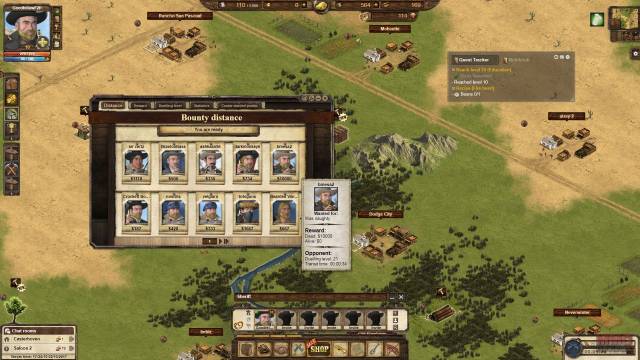 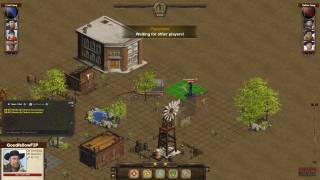 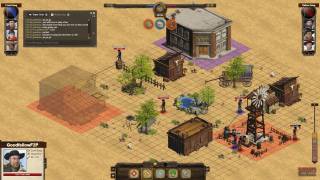 Around the Bank area as we were trying to contest it, we noticed a shift in the game and the other low level enemy player started trying to defend it, but was doing so badly. Fortunately this prompted one of the higher levels to come and deal with us, but a sneaky snare attack from us delayed him and allowed us a foothold as our teammates mopped up the third enemy and took over the contested Mill. We died, but would respawn in three rounds, and once we did we saw that we had one team mate still harassing their Saloon, and our defender at the Mill had taken some pretty heavy damage with a high level enemy chasing him. As the ticker was drawing to a possible victory for us we ran in guns blazing again, knowing we couldn’t damage the high level player instead we focused on snares and distraction to keep him away from our team mate whilst he healed up. To everyone’s surprise we actually won the game and our teammates were very encouraging and complementary to our involvement. Even though we couldn’t get too involved in the combat, thanks to our team mates we definitely felt like we had a purpose and it was great fun.

Overall our experience with The West is mixed. The game is quite slow and repetitive, the graphics and gameplay are dated, and from the matchmaking for the Adventure it’s clear that the population is pretty low (at least for low level players). It’s interesting enough as a casual game, but does require some commitment, and if we hadn’t had a positive experience with our teammates in the Adventure then we could have easily come away from it feeling the match-making is terrible and that the feature was too exclusive only to high level players. It’s never going to feel modern, but it’s worth checking out.

This entry was posted on Thursday, October 5th, 2017 at 8:00 am and is filed under Articles, MMO News. You can follow any responses to this entry through the RSS 2.0 feed. Puedes dejar una respuesta, o un trackback desde tu sitio web.