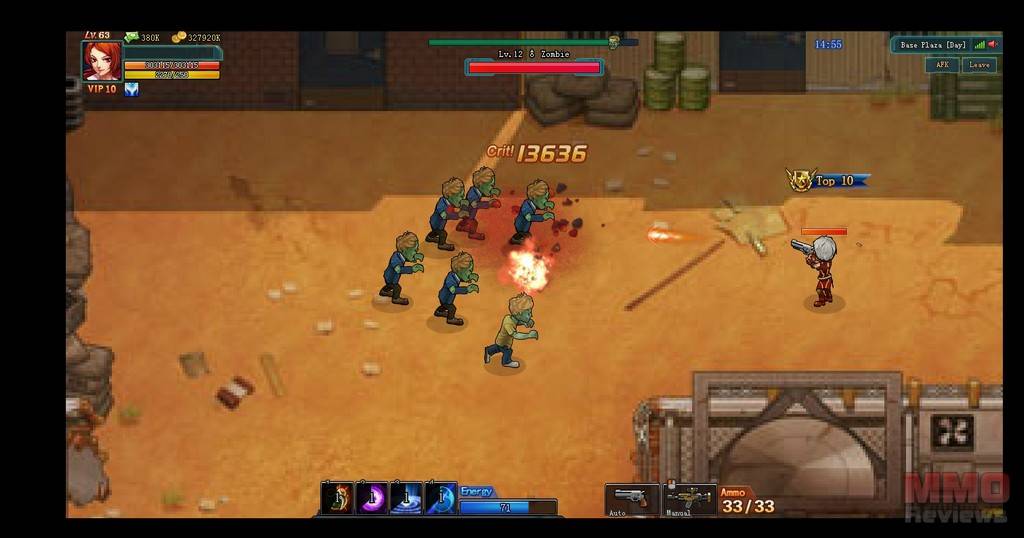 A fast and funny free to play shooter, Zombies Ate My Pizza is an exciting browser-based MMO RPG where players step into the shoes of a survivor after the zombie apocalypse, rallying together with other humans to fight back against the infected horde. This MMORPG has a humorous tone with constant pizza and cheese related jokes that work well with the cartoony graphics and casual-based gameplay that still manages to give a slight challenge as the game goes on.

Players will fight through various levels and stages in an ongoing PVE campaign fighting against various zombies and alien creatures, meeting new NPC’s and finding out just what exactly has happened and how mankind can begin repairing. The casual browser-based controls allow players to aim and shoot with the mouse was controlling with the keyboard and using the number keys to fire off powerful AOE skill attacks. Fighting through the zone players can destroy various objects such as gas canisters to create huge explosions, using the environment against the enemies, once completed the player gets a score for how well they did on the level and are rewarded.

As well as the standard PvE content players will also be able to go up against other players in challenging PVP modes to put their skills against each other and find out who is the best, including Militia battles for players that have created a player militia (Guild).

Evil extra-terrestrials invaders have unleashed an apocalyptic virus on the world that has brought its cities and civilisation to its knees, those infected victims roam around endlessly looking for survivors, now seeing them as pizza to be devoured! You’re not alone in your fight, all over the globe militias band together to push back against the undead mindless scavengers in an overarching story that spans the entire game.

Players are able to buy weapons from the arms cache, each having a level and honour requirement, the better the player the better the gear that they can unlock. Players have a manual weapon that they fire with the mouse button which will fire continuously until it runs out of bullets and the player must wait for a short cooldown to add in the new clip. Players can also unlock automatic weapons which will fire when their manual weapon is not being used, useful when the manual weapon is out of bullets. Different weapons have different stats including their firepower and range and can be unlocked through questing and purchasing them from the main NPC’s.

Players have 12 equipment slots which I used to equip a variety of items such as helmets, armour, gloves, boots, eyewear, necklaces and more, equipment gives boosts and bonuses and can be re-forged using the free forge system to improve its quality. Using a re-forged scroll on an item increases its ability to have better attributes, thereby increasing your battle ranking, these valuable scrolls can be gained from lock boxes earned in the Wanted Arrest quests.

This PVP feature on locked when players reach level 42, each day at a set one window players are able to challenge each other in a three V3 battle mode to fight for honour and stamina. These bonuses can be collected three times a day, after that players will receive a flower as a reward. Training sessions last for three minutes and the system automatically adjusts all the players stats so that they are balanced and even and victory depends on the players skill.

The death match PVP event is unlocked from level XXXV and opens for a small window each day where players can sign up. Everyone who signs up is automatically matched up with an opponent were for players on the battlefield is fight it out and earn points by killing the other players until the end of the event, ranking each player according to their earned points and earning them valuable rewards.