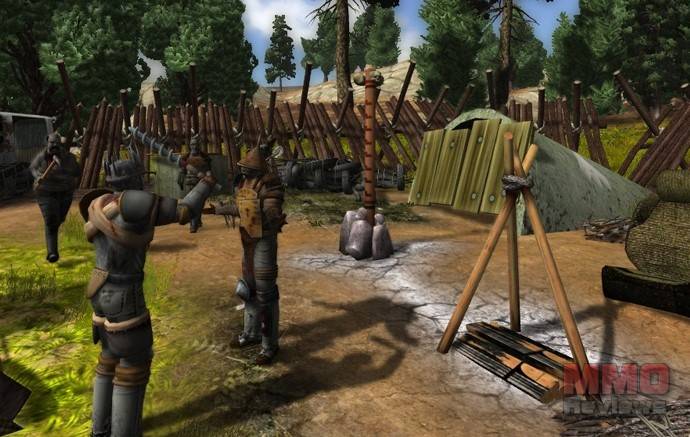 Developed by Notorious Games for Windows.

Xsyon is a massively multiplayer online role playing game (MMORPG), an online community, a virtual world and an adventure. Xsyon is an ever changing dynamic world. Players affect the environment by gathering resources, chopping down trees, hunting animals, building towns and developing trade. Set in the near future, Xsyon is an apocalyptic fable. The world draws its inspiration from history, mythology, and prophecies of the Apocalypse. Most aspects of modern life are now gone

Jan 1st 2012.
War has destroyed life as we know it. The Apocalypse is at hand! Will you fight for justice to stop the chaos or will you join in the ranks of evil to bring upon the ultimate destruction of the earth? Modern technology has consumed itself. War has ravaged the planet, opening a rift to another reality. The survivors of the grisly destruction rise from the ashes of ruin to encounter a world that has changed. A world that once existed only in the realm of mythology, legend and imagination has become concrete and very real. You have forgotten the past and are welcomed by a new primitive future.

With the disruption of the planet, ancient gods awake to once again exert their powers over the earth. The lords of nature have revived the wastelands, eradicating and subverting the remnants of modern technology. Creatures of mutation and mythology now populate the land. The ways of swords and sorcery have replaced the path of science and progress.

You are a survivor.

Combat combines manual targeting and clicking with the final blow success based on the many factors – statistics, skills, weapon type, defense skills, armor and the opponents stance.

Players start the game with a selected set of skills. They gain new skills by learning from other players or by uncovering knowledge in books from the past.

- Skills increase with use.
- Skills decrease over time if not used.
- Skills can be maintained and increased by using experience points.
- Skills are affected by many external factors.
- Many actions are dependant on several skills.
- Skill increase is dependant on the character’s current level of similar skills.
- Over 50 skills in Combat, Physical Actions, Trade Skills, Crafts and Resource Gathering.

- Constantly changing resources can be renewed or depleted.
- Availability dependent on season and weather conditions.
- Resources can be claimed by tribes.
- A large variety of resources with individual properties. Different woods, cloths and metals have properties that affect crafted items.
- Scavenged items such as books can introduce knowledge of new crafts and skills.

Everything in the world can be crafted and destroyed. Craftsmen can find new patterns, recipes and blueprints, learn from other players or gain knowledge through inspiration.

- Characters craft tools, weapons, armor and equipment.
- Characters build buildings and clear roads.
- Eight basic levels of craftsmanship, from Novice to Grand Master.
- Inspiration allows characters to gain crafting patterns similar to those already known, without the needs to find these or learn them from other players.
- Supreme Master level of craftsmanship for those characters whose achievements top their peers.
- Characters achieving the Supreme Master level of craftsmanship work with the Xsyon team to introduce a crafted item of their own design.
- Patterns require a minimum skill level, but most are available to mid level craftsmen.
- Craftsmen are limited to the number of patterns they learn, gaining the ability to add more patterns to their knowledge base as they advance.
- Different craftsmen of the same skill level will typically have a different set of patterns in their arsenal.
- Object quality and durability depends on materials used and the craftsman’s skill.
- Craftsmen depend on tools and supplies from other craftsmen.
- As they advance, craftsmen gain the abilities to repair, reinforce and improve objects.

The economy is entirely player run. It relies heavily on players to gather resources, craft necessary items and trade. Players can barter or buy and sell using local currency.

Subscription fee of $15 after the first month.