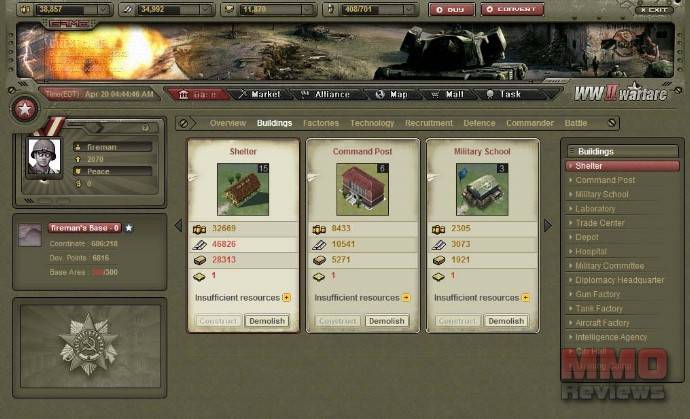 Developed by Playcomet for internet browsers.

The WWII Warfare is a free browser-based strategy game set at the height of World War II. With the Axis against the Allies, both sides will engage in the battle. In WWII Warfare, you can build your own base and develop your infrastructure. ultimately, you can make an attack to your enemies and loot resources. Allies enjoy green interface and thus the units enjoy Camouflage uniforms, while axis is permeated with gray colors, just like smoke of the war. No matter which side you choose, you will be brought to the real World War battlefield.

There are three kinds of units, which are infantry, armour and aircraft. There are different ranks for each unit, each one must fufill building requirements and technological requirements.  For each rank increase there is substantial improvement in all fields excluding range.

NbWf41 Squad
The units are equipped with anti-armor and anti-bunker, man-portable rocket launchers.

Rifleman
Riflemen are the basic modern soldiers from which all other soldierly functions stem, armed with assault rifles meant to cover a good medium range.

Ostwind
The Flakpanzer IV Ostwind was a self-propelled anti-aircraft gun based on the Panzer IV tank.

ME262
The Messerschmitt Me 262 Schwalbe is the first operational turbojet fighter aircraft as a multi-role fighter warplane.

F4U Corsair
The Chance Vought F4U Corsair is a carrier-capable fighter aircraft and the most formidable fighter.

Using spies you can get information about troops, tech, buildings and resources. When you have your army built up and your defenses in place chances are sooner or later you are going to get into a battle with another player. You may attack them or be attacked by them but either way the battle will be decided by your armies. The Bigger army will beat the smaller army and win the battle. If the attacker wins they will be able to take resources that the defender has at their base. So it is very important to protect your resources and armies at all times.

Commanders lead the forces and gain exp from how successful your attacks are, their attributes are passed onto your forces and increase with experience. The abilities of the commander can be enhanced with various junior officers and items. The commanders can gain four Exp points by engaging in different battles such as Strength, Command, Politics and Charm. Also you can assign the points gained at your will to make your commanders stronger and customize your own strategy to attack enemies.

You can set a commander as the officer of your base, and the officer lead the troops in the defense battle.

There are 3 levels of resource factories I,II,III each collecting more resources than the tier below it.

There are two types of quests or tasks available in WWII Warfare— Newbie Quest and Crusading Quest. Of them, Crusading Quest is divided into three types based on the difficulties of the Crusading quest. By doing each quest, you will get more resources and rewards. So do your best to complete the quests, you will be ranked higher in the game.