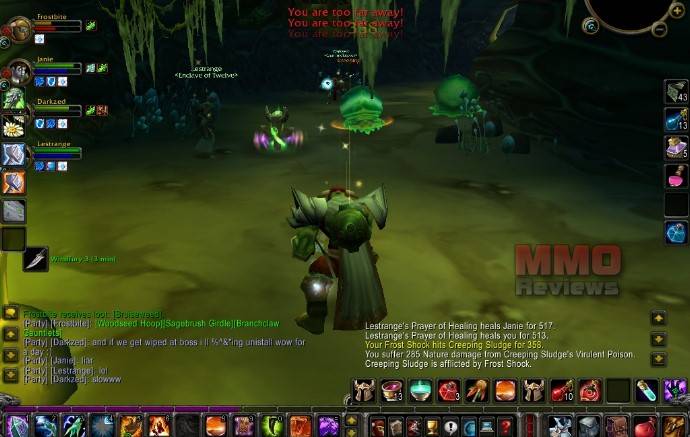 Developed by Blizzard Entertainment for Windows and Mac.

World of Warcraft, often referred to as WoW, is a p2p massively multiplayer online role-playing game (MMORPG) which enables thousands of players to come together online and battle against the world and each other. Players from across the globe can leave the real world behind and undertake grand quests and heroic exploits in a land of fantastic adventure.

Four years have passed since the aftermath of Warcraft III: Reign of Chaos, and a great tension now smolders throughout the ravaged world of Azeroth. As the battle-worn races begin to rebuild their shattered kingdoms, new threats, both ancient and ominous, arise to plague the world once again.

World of Warcraft is an online role-playing experience set in the award-winning Warcraft universe. Players assume the roles of Warcraft heroes as they explore, adventure, and quest across a vast world. As a "massively multiplayer" game, World of Warcraft allows thousands of players to interact within the same world. Whether adventuring together or fighting against each other in epic battles, players will form friendships, forge alliances, and compete with enemies for power and glory.

A dedicated live team will create a constant stream of new adventures to undertake, lands to explore, and monsters to vanquish. This fresh content ensures that the game will never be the same from month to month, and will continue to offer new challenges and adventures for years to come.

The game's races are further divided into two warring factions: the Alliance and the Horde. The Horde and Alliance are the two sides battling for control of the world. In years past, they fought brutal wars against each other, but today, they have settled into a tenuous stalemate. Occasional skirmishes still erupt between the two sides, but open warfare is no longer raging across the continents. Still, the Horde and Alliance are hostile to each other, and members of one faction are never welcome in the cities of the other.

WoW offers twelve playable races: Dwarves, Gnomes, Humans, Night Elves, Draenei, Orcs, Tauren, Trolls, Undead, Blood Elves, Goblins and Worgens (these last two with Cataclysm expansion). Each of these races has unique racial traits and certain playable classes available to them. These racial traits and class options help them to accomplish their goals in the world.

- Druids; Druids are the keepers of the world and masters of nature with a diverse array of abilities.

- Hunters; Hunters are deadly marksmen, capable of bringing their enemies down from a distance with bows or rifles.

- Mages; Mages wield the elements of fire, frost, and the arcane to destroy or neutralize their enemies.

- Paladins; Guardians of the Holy Light and defenders of the Alliance, paladins bolster their allies with holy auras and blessing to protect their friends from harm and enhance their powers.

- Priests; Priests are the masters of healing and preservation, restoring their wounded allies, shielding them in battle, and even resurrecting their fallen comrades.

- Rogues; Rogues are a lightly armored melee class capable of dealing massive damage to their enemies in a flurry of attacks.

- Shaman; Shaman are the spiritual leaders of their tribes and clans.

- Warlocks; Warlocks are masters of shadow, flame, and demonic power.

- Warriors; Warriors can be a raging berserker or an iron-clad juggernaut, capable of withstanding tremendous attacks while protecting their allies from harm.

- Death knights; The fearsome death knight, World of Warcraft's first Hero class, is not your average adventurer seeking to prove his or her worth on Azeroth's fields of battle.

In the World of Warcraft, there are two types of professions, primary and secondary. Every player may have as many Secondary Professions as he or she desires but will only be able to choose two Primary Professions. All professions also fall into three categories: gathering, production, and service. The proffesions are: alchemist, blacksmith, cooking, enchanting, engineering, first aid, fishing, herbalism, jewelcrafting, leatherworking, mining, tailoring, skinning and inscription.

As a fun way to learn more about Azeroth and advance the story line, quests form the foundation of the World of Warcraft adventure experience. From simple tasks such as gathering supplies for a local blacksmith to complicated endeavors such as infiltrating the stronghold of a twisted cult, quests are a constant source of risks and rewards for characters of every race.
Thanks to their wide range of complexity and the sheer numbers, quests will continually provide players with engaging and worthwhile challenges, regardless of how often those players can play each day. And while many quests can be finished by individual players relatively quickly, others can require multiple players to adventure together for a week or more.

World of Warcraft includes both player vs. environment (PvE) and player vs. player (PvP) gameplay. In PvE gameplay, you can do quests, fight monsters, speak, trade, gain experience, learn skills, and advance levels as you would in any other massively multiplayer online role-playing game (MMORPG). In PvP gameplay, you are fighting other players in the wilderness or in special places called Battlegrounds. Sometimes these two gameplay modes can intersect, for example, when a player is attacked by another player (PvP) while fighting a monster (PvE).

Because players may prefer one type of gameplay over the other, there are different realm types that emphasize or deemphasize certain gameplay elements, such as PvP. However, the core game will be much the same for any realm regardless of type.