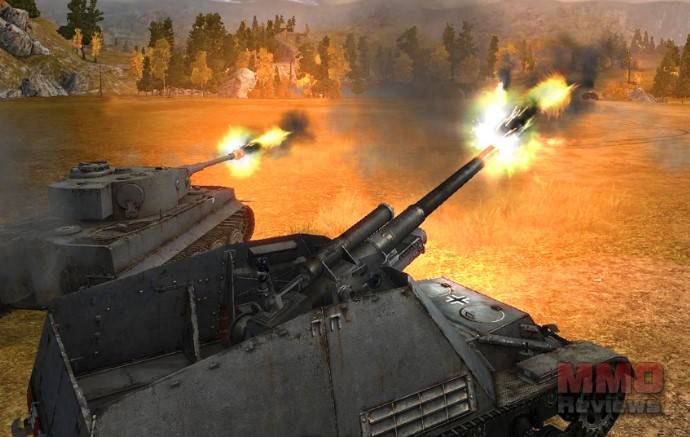 World of Tanks is a free to play massively multiplayer online action game dedicated to armored warfare. Players enter epic tank battles of World War II with other steel cowboys all over the world. The arsenal includes more than 150 armored vehicles from America, Germany, and the Soviet Union, carefully detailed with historical accuracy.

It features a flexible system of authentic vehicle upgrade and development that allows players to try any of the vehicles and weapons in the game.

World of Tanks features armored vehicles from Germany and the Soviet Union that were produced and designed starting from early 30’s and up to the Korean war. Gamers can have light, medium, and heavy tanks, as well as tank destroyers and long-range self-propelled howitzers. Apart from real tanks, the game includes prototype vehicles, such as the German E Series tanks.

The game keeps the balance between realism and gameplay. World of Tanks is not a hardcore simulator; gamers won’t have to spend their time on getting used to controls. The game’s difficulty lies upon applying your tactical skills and coordinating moves with your teammates.

The game models are nearly identical to their real-life prototypes, and this refers to all game aspects. Game tanks firing rate equals the firing rate of real tanks in training-ground conditions. When firing in motion, scattering appears, and the faster you go, the bigger your scattering is. The number of shells and positioning of elements are identical to real vehicles. Specifications, dynamics and turret turning speed also depend on a chosen model.

Every clan has a certain amount of “chips” equal to the number of its members. By putting a chip on a chosen province, a clan shows its claim on capturing it. If another clan expresses its will to capture the same province or if the province belongs to another clan, the two clans are to engage in a battle for it. Clan Masters can declare attacks on neutral or enemy provinces once per day, and a corresponding number of battles are scheduled and take place accordingly.

-Credits are earned by participating in battles and the better you do during a battle, the more credits you earn. Credits are used to buy equipment, ammunition, tanks, and also for repairing damaged vehicles.
-Research Points are used to unlock new equipment and tanks in the tech tree. It can be used only on the current tank.
-Free Tank Research Points function the same way as Research Points, except they can be used on any tank.
-Gold is probably the most fluid resource. It is like money where it can be used to exchange with other stuffs. Gold is bought with real money, meaning you'll need to pay for it probably using Paypal, your credit card or something similar.