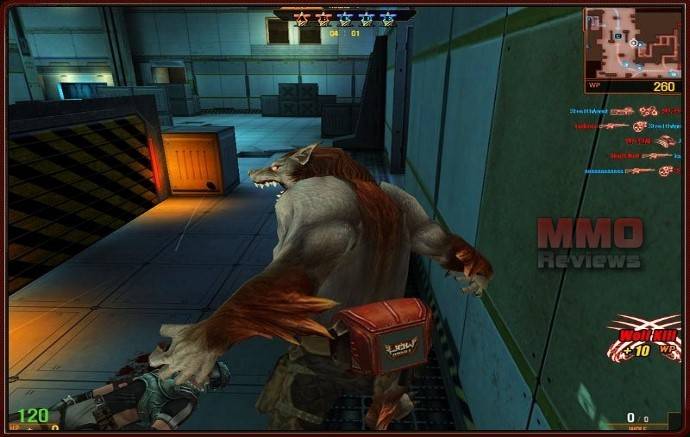 A team focused FPS game allows players to fight through six different game modes over 15 available maps as they step into the shoes of engineered soldiers that can transform into powerful werewolf super soldiers during battle empowering themselves with new abilities and skills. Wolf Team Reloaded is a fantastic free to play FPS offering a different style of strategy where players must balance their long range Human form against their up close melee Wolf form in battle.

Starting out as a mystery where soldiers had gone missing during operations, the truth was revealed that these soldiers had been taken and turned into lycanthrope super soldiers, capable of turning into werewolves they were the military’s greatest secret. Using a serum they believe they needed to transform them back into their Human form, it was revealed that it was no more than a sedative and only through learning how to control the metamorphosis did these soldiers gain control and independence. Now some see themselves at the top of the food chain and humans simply prey, whereas others are the only things that stand between humanity and these violent foes.

Wolf Team Reloaded is a fast-paced MMOFPS where players will fight in team based battles to numerous game modes and battle maps with the intent on earning currency and XP to increase their abilities and rank. One of the core features of the game gives players the ability to transform between their Human form and their Werewolf alter ego. As Humans players have a huge array of weapons available to them, giving them the great advantage in ranged combat, whereas Wolves are limited in their range but up close they are faster, stronger and considerably more durable than their Human counterparts. This ability adds a unique element of strategy to the game where players can switch up their form at a moment’s notice to react to an attack or plan ahead an assault with their teammates.

Superior at long range Humans rely on their weaponry to keep them safe, as they are slower and have a smaller number of hit points they are extremely vulnerable in melee combat and so must keep their enemies at bay and kill them before they get to close. Human’s weapons come in a wide variety from long-range sniper rifles to up close shotguns and pistols and even grenades that can help stun Werewolves; the majority of weapons available to Humans can be upgraded to improve their qualities.

Where Humans have weapons the Wolves have their different forms, ranging from the basic Ghost Wolf who is able to disappear from sight making them an ideal assassin attacking from nowhere, or the Guardian Wolf that focuses on using his powerful block ability to defend himself and his allies. There are also numerous mutations that players can purchase giving temporary access to other Wolf forms such as a Smart Wolf that is able to replenish its hit points by slashing at those players that have killed during the match and even the Ice Wolf that can fire off freezing attacks to hold their enemies in place.

With six standard game modes such as Destruction where players must try to detonate a bomb in specific locations whilst the other team tries to stop them, Wolf Hunt where a player is chosen at random to start out as a powerful Wolf and tasked with killing other Humans to turn them into Wolves and over to their side; the victor is being the team that manages to eliminate all the enemy first. Many of the game modes have various options that can be customised to create different types of games, restricting weapon choices or Wolf forms or even restricting the ability to transform where one team must play as Humans for the duration of the match and the others play as the Wolves.