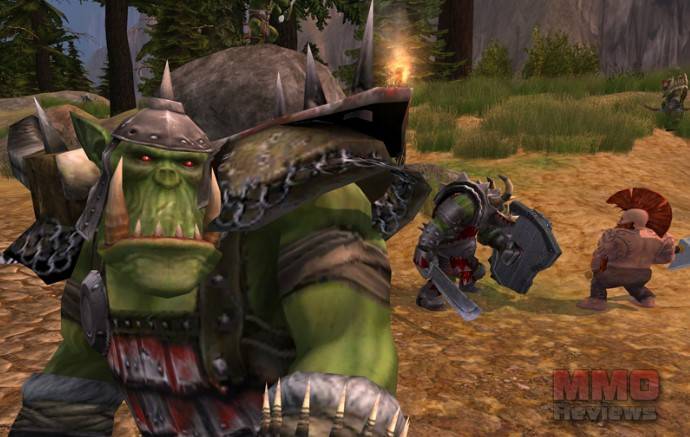 Developed by Mythic Entertainment for Windows and Mac.

Realm vs. Realm, or RvR, is a term trademarked by Mythic Entertainment during the development of Dark Age of Camelot. RvR is team-based Player vs. Player (PVP) game-play where each Realm works together toward a common goal. Players choose a side by selecting a race and, in the case of Warhammer Online, they battle it out in areas and work toward goals provided by the game, including Scenarios, Keep Sieges, and City Sieges. It means that a player never has to fight alone because there is always an army of allies that has his or her back. Players can choose to level-up in RvR areas, or stay in safer, Player vs. Environment (PvE) areas until they are ready to jump into the real battles of WAR.

This takes place within three different racial pairings: Dwarfs vs. Greenskins, Empire vs. Chaos, and High Elves vs. Dark Elves. Although there are only two races per pairing, players may travel to either of the other two pairings to help fight with their friends and allies. There are four types of RvR combat: Skirmishes (random world encounters), Battlefields (objective-driven battles in RvR-specific areas), Scenarios (instanced, point-based battles against the opposing faction), and Campaigns (invading enemy lands and capital cities). RvR contribution includes both Player vs. Player (PvP) combat and (to a lesser extent) Player vs. Environment (PvE) quests so that you can assist your realm in their victory, regardless of preferred play-style.

All activities in WAR contribute to the campaign, as it is the primary focus of the game. Each of the aforementioned activities generate Victory Points (VP) which measure a realm's progress in capturing a zone. When one realm reaches a designated amount of Victory Points in a particular zone, that zone falls under their control and the war pushes deeper into enemy territory. This back and forth struggle for zone control continues until one side holds two racial pairings, and the attacking side may sack, loot, and pillage the enemy's capital city. The capture of a capital city is the pinnacle objective of the campaign. Once a capital city is taken, the attackers are given a period time to loot the city. When this period expires, the defeated players receive increasing support from NPC guards until they are able to force the attackers out of their city and close the gates. At this point the campaign then begins anew, restarting the cycle.

Keeps and Keep Sieges were introduced into WAR’s Realm vs Realm combat system during the Closed Beta phase of testing. Keeps can be captured for Victory Points towards your realm and can be claimed by the capturing guild. NPC guards are stationed at all keeps (claimed or unclaimed) to ensure that a certain level of difficulty is maintained and that, at minimum, six to twelve players are required for capture. Should players decide to defend it, the difficulty in capturing the keep will increase greatly. Keeps are decorated according to the aesthetics of the race that currently controls it; however, the basic layout will stay the same. If a keep has been claimed by a guild, it will display the heraldry of that guild. Siege warfare includes four types of siege weapons: rams for destroying keep doors, ballistae for targeting enemy players or destroying enemy siege emplacements, cannons, catapults, and trebuchets for AoE splash damage, and boiling oil to use from keep walls. Emplacements located around the keeps, known as siege pads, are used to determine where siege weapons can be constructed. The pads themselves can be destroyed by players of the defending realm, inhibiting the siege process.

Mythic also prevents the ganking of new players by more experienced players. For example, in Scenarios, low-level players may be boosted to an average level of play to ensure a more level playing field. Also, if a higher-ranked player enters an RvR zone specifically designated for lower level characters, they will be penalized by being temporarily transformed into a chicken. The lower-level players within those areas can then ignore the higher level player, or dispatch the chicken with one blow.

WAR features a "Tome of Knowledge" (ToK) that is an extension upon similar mechanisms in many other MMOs. The ToK is a multi-purpose reference tool that is designed to provide the player with a great deal of information about the game world. It is also meant to serve as a reduction in the need for players to feel like they have to rely upon third-party sources of information pertaining to the game.

The Tome of Knowledge keeps track of all information pertaining to an individual character and their progress through the game. This progress unlocks lore-related information about quests, the gameworld itself, NPCs, and defeated mobs. For example, upon first encountering a mob within the game, a basic entry is added for that creature in the Bestiary chapter of the ToK. However, with increasing contact, kills, and associated activities involving any specific creature, the information available about those encounters will be added to the Tome of Knowledge. Likewise, the ToK keeps track of the story and progression of the character through the gameworld as they complete quests, explore the map, and otherwise accomplish activities within the game.

- Dwarfs - The army of the Dwarfs in WAR is known as the Oathbearers, named because of their oath of allegiance to the High King. Their duty was to find necessary materials in the most dangerous places in the world, requiring exceptional Dwarves to undertake such a task.

- Empire - The Order of the Griffon is the Empire army involved in WAR, formed by Emperor Karl Franz with the blessing of the Church of Sigmar, the Colleges of Magic and the Reiksguard. The Order is primarily made up of knights, warrior priests of Sigmar and wizards charged with defending the realm, and are answerable only to the Emperor himself.

- High Elves - In WAR, high elf characters are part of an army known as the Shining Guard, under the command of the legendary warrior Prince Tyrion. They were tasked with defending Ulthuan while the Phoenix King and his army fights alongside the Empire.[10]

- Greenskins (Orcs and Goblins) - The Greenskins are part of the Bloody Sun Boyz, led by the Black Orc Grumlok and his Goblin Shaman Gazbag. Their war with their old enemies, the Dwarfs, was manipulated by the Witch King Malekith. His intention was to start a war between the Greenskins and Dwarfs so that the Dwarfs could not come to the aid of the Empire, who would be forced to call upon the armies of the Phoenix King for aid - thus leaving Ulthuan ripe for the taking.

- Chaos - All Chaos players will be affiliated to Tzeentch, as that is the patron deity of the Chaos force in WAR - the Raven Host. These are Tzeentch's most devoted servants, and its leader Tchar'zanek is one of the Lord of Magic's Chosen. Mainly these humans come from Norsca.

- Dark Elves - All Dark Elf players in WAR are members of House Uthorin, one of the noble families of Naggaroth. Their leader, Lord Uthorin, is a master of intrigue and has his sights set on Malekith's throne. But the Witch King has plans of his own.

Warhammer Online features collision detection, a feature that is designed to prevent players from moving through other player characters. This feature works on enemy units as well as friendly units that are flagged for RvR combat. Collision detection enhances the role played by heavily armored characters known as "tanks", as it helps them become far more efficient at holding choke points and protecting weaker players in their group such as healers and casters.