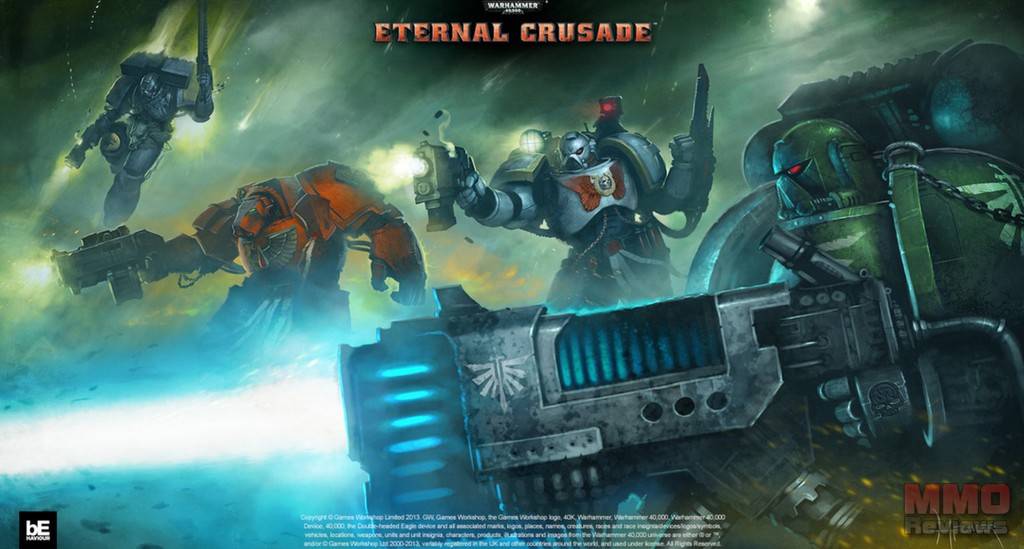 Set in the darkness of the 41st millennium where huge mighty factions endlessly battle against each other in the hope of wiping out their enemies, this adaptation of the Warhammer 40,000 tabletop RPG strategy lets players choose from four iconic factions: Space Marines, Chaos Marines, Orks and Eldars.

The war for the future is spread across the known Galaxy, entire planets turned into bloody battlefields and on one in particular four powerful factions face off against each other with the sole purpose of complete domination and the destruction of their opponents. Players can choose to fight for one of these organisations, each with their own theme, style of play and even unique user interface. For those players who are:

The Orks - violent and vicious "green-skins" made up of goblins and orks, war and conflict is but their way and part of their culture, fighting for the sake of fighting and killing for the thrill of it.

The Space Marines - feared across the Galaxy, these heretic hunting super soldiers fight for the Imperium of Man and the Emperor of Mankind of whom they serve unquestioningly.

The Chaos Space Marines - once loyal Space Marines, they are victims of the corrupting Warp and now turn their sights back upon those they served wholeheartedly and see all the Imperium as their enemy.

The Eldar - mysterious and older than mankind itself, these psychic Warriors are seen by many as daemonic heretics, but they are also extremely powerful and ready to fight.

Every faction has a variety of classes available to it, such as the Blood Angels, Space Wolves and Dark Angels of the Space Marines, or the infamous Bad Moons, Deathskulls or Evil Sunz of the Orkz. These different organisations will give a different style of play to the user, focusing on different tactics gear and combat strategy. Each primary class available in a faction can be customised with a variety of gear items and abilities, these loadout’s can be changed independently each time a unit is deployed into the battlefield. This means that players are not stuck with one particular class or style of play and are free to try out different classes within their faction.

Some more deadly classes such as the Terminators have a resource cost to deployment, similarly some hero classes are limited to the battlefield so that their appearance is of great importance for determining the sway of the battle.

Combat takes place over a larger battlefields and as such can be broken down into long range, medium range and close quarters combat where regardless of the class chosen all the gear equipped players will be useful no matter the situation and circumstance. Equipped with huge blaster cannons or heavy weapons mounted on vehicles to up close and personal violent and vicious chainswords and power fists.

The actual combat is in third person mode such as a typical shooter where players must aim their shots carefully without any aid of an auto attack mode, as well as using their own reactions and reflexes to dodge ranged and melee attacks. As the game was originally adapted from a tabletop strategy RPG players will have to master their positioning, tactics and team work as well as equipping their units with the best gear possible.

The main focus of the game is PVP in the open world, players will have the chance to engage in instanced based PvE content with two unique modes, which will in turn help benefits their chosen faction:

Hives - here players are sent into a Tyranid Hive as a squad and must defend themselves as wave after wave of alien horde descend upon them, increasing in strength and tactics with each wave.

Underworld - descending down into the procedurally generated dungeons, so each dungeon is completely different, players must head as far down into the earth as they can to fight off the terrors that dwell here.

Primarily the game will focus on distributing the game digits player with a number of different founders pack’s that can be purchased pre-game with additional founders items and shop currency to spend and then post launch players will pay a one-off fee to buy the game giving them full access to all the game’s content. The resource description model for the game, instead the company will host a cash shop where players can buy aesthetic items and side-grades.

For those players who do not wish to purchase the game they can still play it as the Ork faction, though they are both restricted to only playing this faction and their progression is also restricted in certain ways as is the amount of content available. Free players can still travel anywhere and if they do not wish to buy the game in full then they can purchase single features through the cash shop.