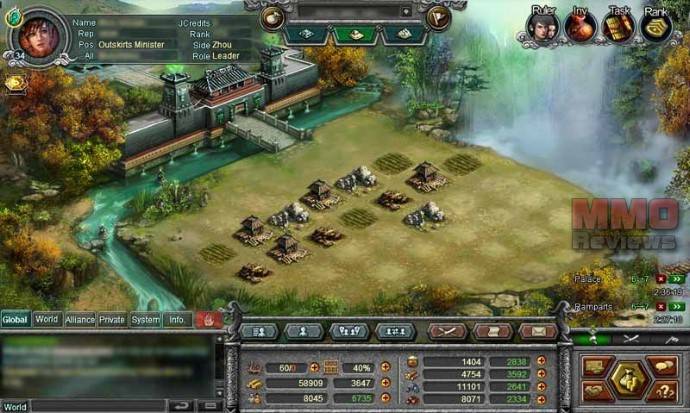 Developed by Ultizen for internet browsers.

War of Legends is a browser-based massively multiplayer online strategy game set in "a world of ancient Chinese mythology". The game is a real-time strategy game in which players take the role of a "Lord" who controls a kingdom. The aim of the game is to develop the kingdom through the construction and upgrading of buildings in cities, recruit armies with which to defend their cities and attack other players, the research of various skills to perform tasks more effectively & to gather resources with which to pay for these activities.

Legends are great heroes who can help your kingdom to grow and lead your armies to victory. Build a sanctuary to summon legends to your city, and recruit them into your pavilion. You can assign troops to each legend, and victory in battle will increase the legend's experience.

Before you can construct your armies, you will have to build a Garrison in your city. You can use your garrison to train four different types of unit. Each unit has its own strengths and weaknesses against each other. Not all types will be available to start with, and you’ll have to match each unit type’s requirements before you can train them.

Halberdier
this is the starting unit that you will be able to train. Halberdiers aren’t as strong as other types, but can be constructed quickly and Legends can lead large numbers into battle to overwhelm smaller armies. The Halberdier is slightly stronger than normal against Charioteers.

Swordsmen
these are generally stronger than Halberdiers, but require more resources to train. Swordsmen are stronger against Archers, and their tougher armour makes them that bit more resilient in combat.

Archers
this unit is strong against Halberdiers, however training Archers does use up a lot of resources such as wood and food. Archers also have a special ability in that they strike first in any battle. In large numbers they can defeat their opponents before they’ve even had a chance to attack!

Charioteers
these are the strongest unit in the game, and are simply awesome in battle! They specialise against swordsmen. Legends can only lead small numbers at a time, and you will need a large population to train them, but once they charge you’ll know it was worth it.

A thriving city needs a variety of establishments to keep it going strong. Every War of Legends building has a role to play in keeping your city safe and your citizens happy. Constructing buildings consumes resources, and they all take time to be completed.

There are four key resources in War of Legends, and each resource is vital to production, learning and growth.

Copper
this resource is vital to your military, so make sure your population is kept busy in your copper mines

You can increase your resource production by Upgrading resource units; Using items that you can either collect or purchase from the shop; Training skills in the university; Completing tasks and collecting rewards; Invading other players' cities; Occupying wildlands.

Each wildland is occupied by an enemy army, and if your legend defeats them in battle, you will gain reputation and experience, and you also have a chance to gain resources and legends. Each wildland has a level, and the higher the level, the tougher the troops and legends guarding the wildland. You can send one or more armies, led by legends, to a wildland of your choice. Higher level wildlands will require you to send large amounts of troops and experienced legends to ensure victory. Each wildland presents you with a number of options:

Invade
if your army is victorious, your troops will win resources and return to the city.

Occupy
if your army is victorious, your troops will be stationed in the wildland, and you will continually benefit from any resource bonus.

Spy
you can choose to spy on a wildland to find out more about it.

Search & explore
when occupying a wildland, you can decide to spend some time searching for legends, or exploring in the hope of finding treasure. The longer you spend searching or exploring, the greater your chance of success.

Dispatch
you can send more troops to the wildland.

Check
you can view the troops that are stationed at the wildland and choose to send them back to your city if required.

Practise
when occupying a wildland, you can choose to practise, and improve the skills and experience of your army.

Players can choose to purchase a variety of in-game items through the use of the "JCredits" / Jagex microtransaction system. The in-game items can be used to speed up developement, train new skills, and make more money, giving paying players an advantage over non-paying players.