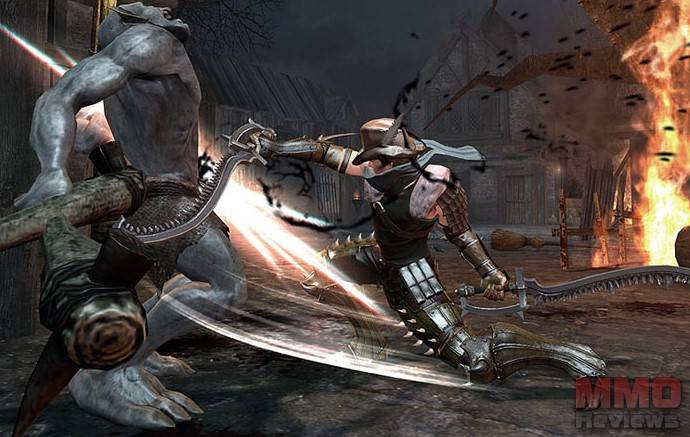 Vidictus is a realistic physics-based multiplayer action role-playing game that combines stunning visuals with high-speed combat. The storyline, inspired by Celtic mythology, is slowly uncovered as players progress in the game. It uses a modified Source engine to enable actions like throwing, shattering, binding with chains, piercing with spears, and more. As characters take more damage in the game, their armor starts to disintegrate and fall off.

Players join a mercenary unit called, "Crimson Blades" to battle Fomors, or monsters in the hopes of reaching Erinn, the paradise promised by the goddess Morrighan.

In this world, there is but one moon, and it shines upon a wasteland where Fomors and beasts roam, hungry to tear flesh from bone. Not so in Erinn. In Erinn, there will be two moons, Eweca and Lateka, and they will shine with the brightness of the gods. There, no one will age or fall ill, and the land will be rich with b ountiful resources.

It is the dream of Erinn, the paradise promised in the Legend, which fuels humanity in these dark times. The people wait, as they have for countless generations, for the black-winged goddess to come and save them.

Action gameplay enabled by modified source engine
Using Valve’s source engine, Vindictus features environments that are both destructible and interactive. Blood spurts from enemies right where the player’s blade sliced. Enemies fall, only to become corpses which can be hoisted and brandished as sadistic weapons. As walls crumble and whole buildings topple, new toys in the battlefield emerge. With source engine physics and destructible interactive environments.

Dynamic and challening party play
Defeating bosses and clearing dungeons in Vindictus requires cooperation and strategy. While one player uses weapons like chain whips to pin giant bosses in place, the other party members sneak behind to attack or stand on the sidelines to cast healing spells to replenish everyone’s strength. Parties of up to four can enter dungeons together and dungeons vary for each Battle Quest ensuring players will never get bored. Raid parties can grow to as many as eight.

Innovative quest system
Vindictus offers engaging story quests that reveal the internal struggles of the non-player characters who inhabit the world of Vindictus. Battle Quests bring players to dungeons to complete mission objectives, bonus objectives, and challenging oaths of Honor that provide extra points. Players use those points to upgrade their character with their choice of numerous skills and spells which in turn unlock even more quests.

Gear crafting and customization
Players start the game as one of the three characters with basic articles of clothing. After the initial tutorial area, players can customize their character’s appearance, including hairstyle, facial shape, skin tone and more. As they progress through quests, players could obtain rare drops and craft one of hundreds of equipment items. Next, players can personalize newly crafted gear with stats and color via the Enchant and Dye systems. In the end, characters will be clad in gear that’s powerful, stylish and unique.

Free to play
Vindictus is free to download and free to play. With high quality graphics and gameplay never before seen in a free to play game.

Fiona
Fiona is a balanced warrior who wields a sword and a shield. She values defense, so she uses her shield to protect herself during combat and the strikes strategically when enemies aren’t expecting it. She is able to wear heavy armor from the start and later learns to wear plate armor as well.

Lann
Lann specializes in dual-wielding weapons, especially swords. His attacks are speedy, and in the battlefield, enemies are left breathless at his seemingly non-stop whilrwind of slashes and thrusts. Because he relies on speed, Lann starts out wearing light armor. As he gets stronger, he learns how to wear heavy armor without impeding his quick movements.

Evie
Evie relies on her magic and alchemy abilities to support others during combat. She wields a staff and is weak when faced with enemies up close, but from a distance, she can summon powerful golems, revive allies and use ancient magic to perform devastating attacks. She starts out wearing cloth armor but, with time and effort, she can learn to wear light armor as well.

Karok
Karok is a giant warrior who wields a large pillar. No one else can use such a massive weapon. He is slower, but hits much harder. Karok's pillar can be swung around and thrown to attack. He can throw the pillar to hit distant enemies, and shift to bare-handed attacks to experience a whole new style of combat.

Lynn
Lynn is a warrior who moves like a dancer and wields a deadly spear. Her stamina help her perform a variety of unique attacks. Thanks to her damage skills known as "Swift Assassin" and "Five Fingered Death", she is able to inflict massive damage.