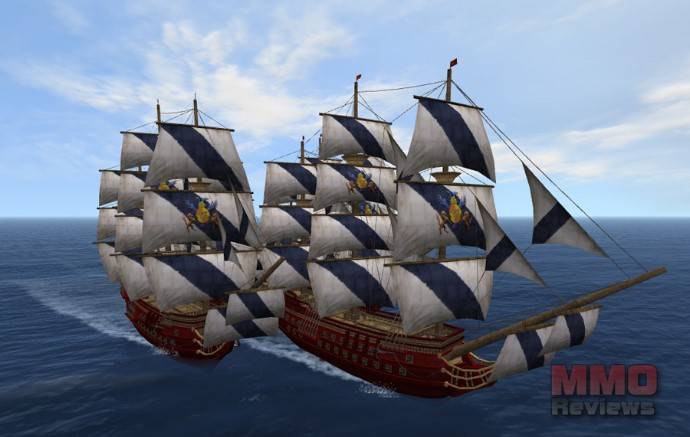 Uncharted Waters Online is a free to play MMORPG set within several timelines during the Age of Exploration as a romantic and historic fictional account of the era.

Professions and skills
More than 75 professions and more than 100 skills to master. It is not just becoming a strongest player in the server.
You can also change one profession to another anytime.

Conquering cities
There are hundreds of neutral cities to conquer to take advantage in economy and politics. Investing lot of gold into the city is one way to increase you nation's influence or just fight with current possessing nation to conquer back a city.

100 vs 100 pvp sea fights
More than 200 ships engage in a ship battle to take over possession of cities.

Own aparment and island
Buy an apartment in you city and decorate with furnitures and artworks that you like. Invite your friends and guild members to chat and play together. Find an unoccupied island and build your own farm to grow fruits and raise pigs.

Live events
Several systematic in-game events are run regularly. Special event will occur with GMs in the game. Enjoy fireworks at summer night in Venice with your friends.

In the year 1453 AD, Constantinople, the capital of Byzantium Empire, was taken. The people of the Christian empire were terrified of the Turk's formidable military prowess and at the same time disappointed that they lost their only passage for Eastern trading.

Meanwhile opposite the Eastern European region no longer the superpower it once was far to the West the Iberia Peninsula celebrated the birth of a new military state called Spain, a result of revolution. Hand in hand with Portugal she immediately launched a campaign of utmost importance-defeating the Muslim forces.

Flag ship Portugal was forced to explore new routes around the African continent pressured by the legendary Christian Empire on the East and Muslim powers. Direct trade with India was of utmost importance. Spain was also determined to find new ways to the East far beyond the Atlantic Ocean entrusting Christopher Columbus for the task.

To the East before anyone else! The era of passionate adventurers and great navigators is dawning upon you.

The game can be divided into sea-based areas, land-based areas, and towns. Players will live and play real world of 15th century to make their own history. Players may choose from among 6 nation-alities: England, Dutch Republic, Ancien Régime in France, Spanish Empire, Kingdom of Portugal, and Republic of Venice. As well the player may choose from several occupations after choosing a basic class: adventurer, merchant, and soldier. Players are able to trade, explore, battle and join in live events such as "Great Sea Fights".

Portugal
Portugal is a mercantile nation that prospers by trade from profits of the land facing the Atlantic Ocean. They quickly rode the advances of navigation, and were the first to round the Cape of Good Hope. Recently, after returning from the discovery of the Indian route, and fiercely compete with their neighbor, Spain.

Spain
Spain is a powerful authoritarian kingdom dominated by the royal house of Habsburg. The Habsburgs' rise to the royal throne came because of the premature death of the late king's son. Spain came into possession of the Netherlands which is the territory of the current royal family.

England
England is a small island country to the north for whom wool is the key industry. However, the wool market became unstable because of the Spanish political meddling in the Netherlands, which is England's biggest trading partner. The wool trade decreased, and a heavy recession ensued. The Queen wishes to repair the situation, but there is no method to compete with powerful Spain.

The Netherlands
The Netherlands is a rising maritime courier nation facing the North Sea. They are a producer of wool fabric. The main Habsburg territory of the Netherlands became Spanish territory by inheritance of the Spanish king. The Spanish political meddling awoke the independence movement, but the military strength of the House of Alba prevents the movement.

France
France is an agrarian kingdom holding territory from the Mediterranean to the North Sea. France is surrounded by strong ocean-faring countries, and its seafaring business was delayed because of a long line of monarchs who were obsessed with themselves. The half-century delayed Renaissance starts from the Italian peninsula, and there are many nobles who collect rare treasures and artifacts.

Venice
Venice is a small city-state floating on the sea. It is called the "City of Water". Venice's maritime industry had long been prosperous, and Venice had long held a monopoly on the profits of the Mediterranean trade on pepper from Alexandria. However, recently the Ottoman Empire appeared in the East and Portugal discovered a sea route to the Indies.

Economy system in Uncharted Waters Online is very similar to real life. Trading goods, investment, relationship with politics are involved. There is no fix profit. Economy will fluctuate time to time with supply and demand of of good. Tax and customs are applied to the game. Reduce tax by conquering cities. Hundreds of ways to earn money and thousands of silkroads and spice routes.

Adventurer
Adventurers are in charge of reporting discoveries to those interested in treasures, artifacts, exotic animals and new places. They excel in sailing and survival skills, providing helpful abilities to their fleet.

Trader
Traders are in charge of sailing around the world finding the best and most exotic goods to trade in. Buy low and sell high is their motto. They are also responsible for crafting various goods from Cooking to Alchemy.

Soldier
Soldiers defend adventures and merchants from pirates in exchange for fame and glory. Of course, users can choose to become a band of pirates. Bombing ships and jumping into melee battles are the highlights of the soldier class.