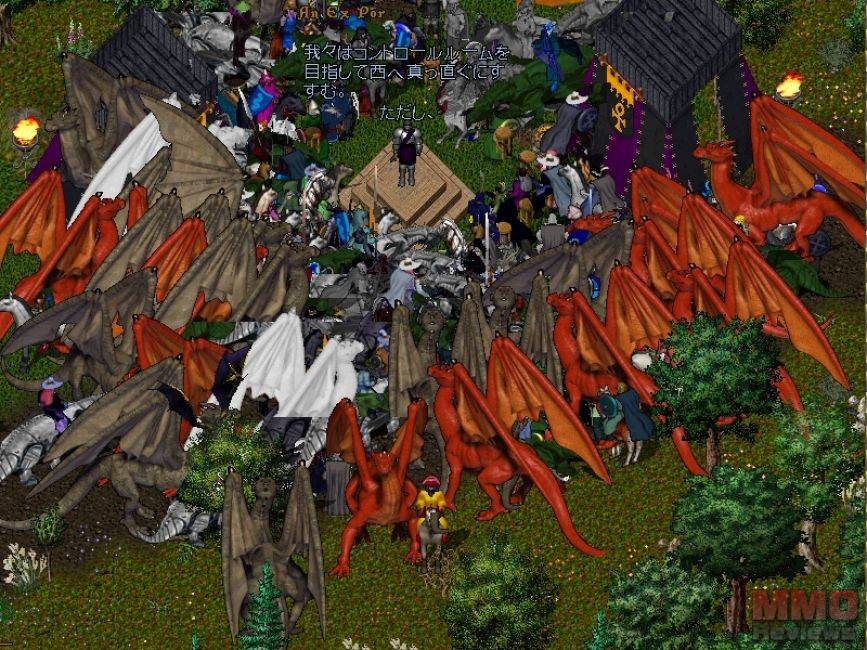 Set in a classic fantasy realm, Ultima Online is the original MMO RPG that kicked off the genre. The first online title from the Ultima franchise, it is an epic adventure of swords and sorcery set in a complete sandbox world where players can to do as they wish. Adventure into the unknown wilderness, explore long lost dungeons to recover ancient treasures or simply try to live out the peaceful life as a city crafter running your own shop, the choices are endless.

Players are not bound by classes and have the complete freedom of a skill-based system, choosing from a variety of different skills that can be trained up independently from each other. Each skill has a value from 0 to 100 as a visual indicator of how well trained a player is in that skill, players are able to mix and match their skills to create different hybrids and templates to best suit their own place style. Play as is swordsman with a dash of magery, and animal tamer with archery or a thief able to hide with their skill or cast magic to make themselves invisible!

Each player has a skill cap that represents the total skill points, once this Is reached if they wish to put skillpoints into a new skill they must passively remove them over time from skill that they have previously allocated points to.

Players can do far more than simply fight monsters and the being a fully fledged crafter is a profession and role that many do follow, forgoing all combat skills and focusing solely on creating items. Whether whiling away in your lab creating Alchemy potions, making furniture over the saw table or working iron over a hot forge creating the finest armour and weapons in the land, players are able to make all manner of items usable by themselves and the players. To use crafts players must gather up resources, each resource gathering often requiring a harvesting skill such as mining, or lumber jacking, though the resources needed for Alchemy can be simple reagents picked up off the floor or cutting up the leather from a slain animal to use in Tailoring.

Is possible, by use of a house deed, to place your own home somewhere in the world. Depending on the size of the house you have bought, anything from a small tower to a medium-sized villa or extra large tower or keep, will require an area of open undeveloped land to build upon. Such areas are hard to come by and often populated already meaning there is an actual real estate market within the game where players buy and sell houses. Players can decorate their houses with all manner of furniture and trophies, equip workstations follow crafting duties and even laydown a Guild stone to create their own Guild with their friends.

In general the world is free from PVP and completely optional where performing negative actions such as stealing, looting and killing other players is limited to the dark facet lands of Felucca, specific PvP servers or Faction wars. In these situations players are able to attack each other freely and if successfully killing their opponent loot them of all the items they were carrying, items bound to a character as seen in other MMORPGs are extremely rare and so players must ensure they don’t come out with anything they’re not prepared to lose from packs of Player Killers that prey on the weak or opportunistic thief looking directly into your backpacks inventory to try and steal valuable items! There are consequences to such actions, murderers become “red” and are freely attack double as well as lacking access to any city banks, as NPC guards will instantly appear and kill them, except for the most depraved cities such as Buccaneers Den, also if they are killed they suffer extreme stat and skill loss.

When dying players appear at their corpse as a shrouded ghost, able to appear and disappear from the sight of the living, can pass through doors with ease as they run around a grey and lifeless world. When speaking to the living their unintelligible wails come across as strings of "OoooOOOooooO" unless the player is trained in the spirit speak skill. Once resurrected by a player or a wandering healer the player is restored with hit points but simply dressed in a grey death robe and must then try to make their way back to their body in a traditional “cops run” to recover their items before their body turns to dust and can be looted by other players.