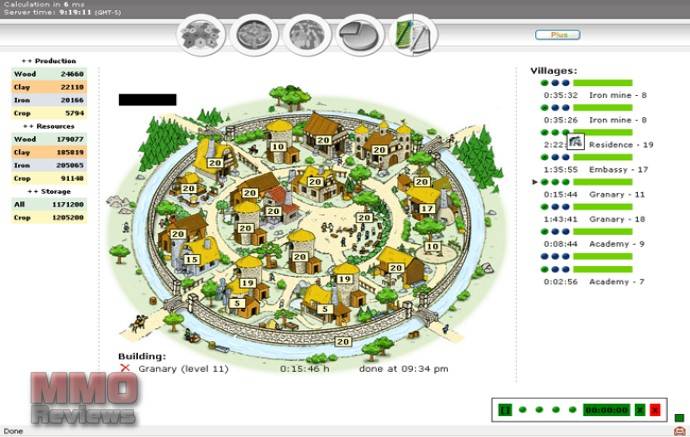 Rise up your tribe to be recognised. Build your humble villages into mighty settlements and capitals of culture. Train a military force that will put fear into your rivals as they see your approach. Conquer lands, dominate your enemies, rise up to be a ruler. Travian (known as Travian Legends) offers an exciting strategy focused war MMO where players must manage their own empire and resources, field an army and battle against real players from around the world.

The main concept of the game is for players to duke it out trying to be the best tribe on their server by expanding their territory and ruling multiple villages. By constructing and upgrading settlements, and training up a military to defend or expand them, players can enjoy a tactical single player experience. The overall goal for the server is to be the first to construct a Wonder of the World, a task too mammoth for any individual player to complete, and so players will form Alliances with each other to ease the burden. With these alliances formed the battle lines are drawn and so Alliances of multiple tribes will go to war against each other to ensure that they are the only ones able to claim victory on the server.

Romans – Able to develop a strong economy faster than other tribes, they have some of the best troops but they come at a heavier cost, they are best suited to experienced strategists

Teutons – This tribe is ideal for aggressive players due to the strong and cheap infantry that are ideal for fast raids, but they have high time requirements; they lack defenses so can be harder to play for new players

Gauls – One of the easier tribes to play due to their mainly defensive nature and units, with a low time requirement they also have a fast and powerful cavalry that can make them a little more versatile

Egyptians – Having not only strong players but also a far greater access to resources needed to advance a village, they are equally a solid choice for new players

Huns – With relatively little defense and an extraordinary cavalry, this hyper-aggressive tribe is only for the most hardcore players that want to try a completely different playstyle that Travian has not offered before

Each player begins with one village that they must improve, by upgrading resource production through their farms, woods, mines and quarries. With more resources players can invest them into constructing new buildings which will provide a variety of new features such as the ability to trade through the Market, or begin training combat units through the Barracks. Both resource areas and buildings can all be upgraded by spending more resources, though no building can be higher than the villages Main Building, which will in turn improve their yield and output speed.

In time, after meeting certain prerequisites, players can expand their territory and either settle new villages or take other player’s villages through conquest. Having multiple villages under a players control requires a lot of micro-management to balance resources and time.

Each tribe has their own unique types of units that can be trained through the Barracks, which can be used to defend villages or aggressively attack AI outposts and player settlements. Once a player has chosen a target they can select the units they wish to fight and then launch their attack. The game calculates the winner and loser based on the makeup of both players’ military forces (number and units used), any bonuses, and other defensive factors. Each players individual Hero can be attached to a military force to make them stronger, however they can also be used to go on independent adventures to gain items, XP and resources, or used within a village to boost a specific resource production.