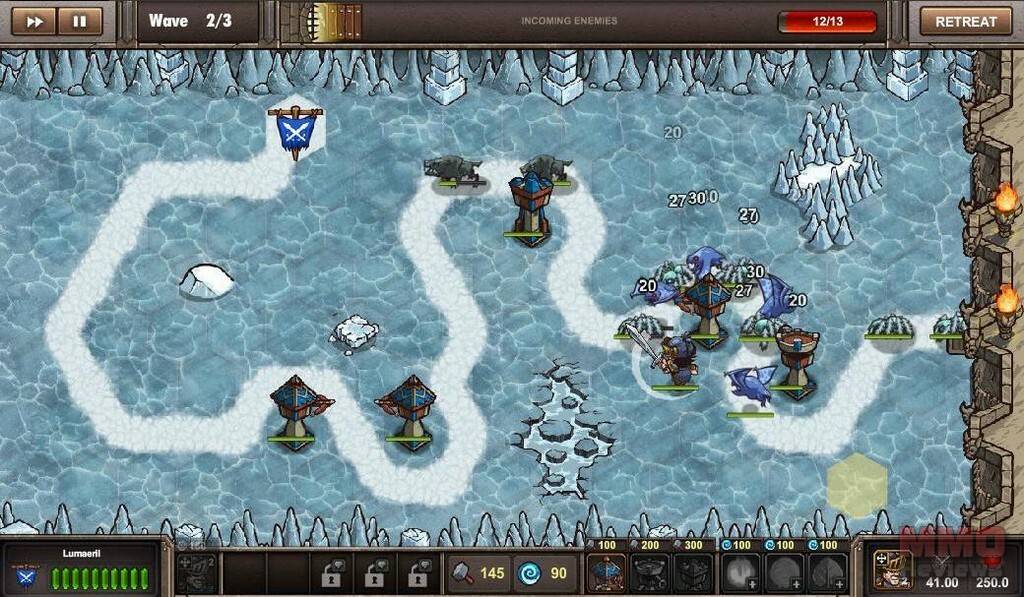 Developed in Canada by ODD 1, Tower Heroes is taking the tower defence game genre into a new direction, being a cleverly-balanced massively multiplayer strategy game on a solid foundation of challenging tower defence gameplay. This combination makes the game absolutely unique and offers players an entirely new gameplay experience.

Tower Heroes is set in a medieval comic world. Players choose their hero – a dwarf, elf or human – and take command of a lonely castle. Mustering all their skills and strategic thinking, they gather resources from the surrounding environment and try to build a true empire. As their reserves of raw materials grow, players can expand their own castles and turn them into impregnable fortresses. Diplomacy and an alliance system are crucial elements in the game as well.

In Tower Heroes, players can choose one of the following three races: elves, dwarves, and humans. Each race has a specific benefit:

Elves - Elves enjoy the benefit of an increased production of resources.

Dwarfs - Dwarfs are able to build up defensive troops at a lower cost than the other races.

The available resources are gold, food and crystals which are needed for constructing buildings, learning new skills as well as buying better equipment for you and your hero. Expanding your realm allows a faster production of resources but results in a more complex management and in constantly growing costs for expanding the frontiers. Campaigns against other players also require resources, food being the main requirement.

In Tower Heroes, there are 2 fields where players can carry out research: Domination and Battle. The research itself doesn’t cost any resources, the time you have to dedicate, however, increases significantly after each level (20 min in level 1, 2h in level 2).

Domination Research - Research in this field decreases the construction costs for all the buildings, boosts their production rate as well as the construction speed for buildings. Moreover, castles receive an additional upgrade increasing their annex land number.

Battle Research - Dedicating time for research in this field offers the following benefits to the player’s units: HP boost, increased damage count, range boost, defence boost, and luck boost. In addition, the costs for the production of new units will decrease.

The more players expand their influence across the map, the more often they’ll be caught up in skirmishes and even all-out onslaughts. That’s because you’re never alone in the world of Tower Heroes.

All combats are carried out in the same pattern, no matter if it’s a castle siege or a raid within a dungeon. Every battle is divided into a specific number (3, 5, etc.) of waves of attack, each one consisting of several troops of different levels and attributes, such as archer, mage, knight, etc. With his military power in form of towers of different types and heroes, the player who starts the battle has to defend his flag that is positioned at the end of a winding path representing the size of the castle or dungeon. The dungeon or castle will automatically be defended but not at all at random.

Players have the possibility to form alliances with each other in order to coordinate their attacks and destroy their opponents faster. Members of an alliance are provided with a menu that serves as a kind of chat room where they can communicate with each other.