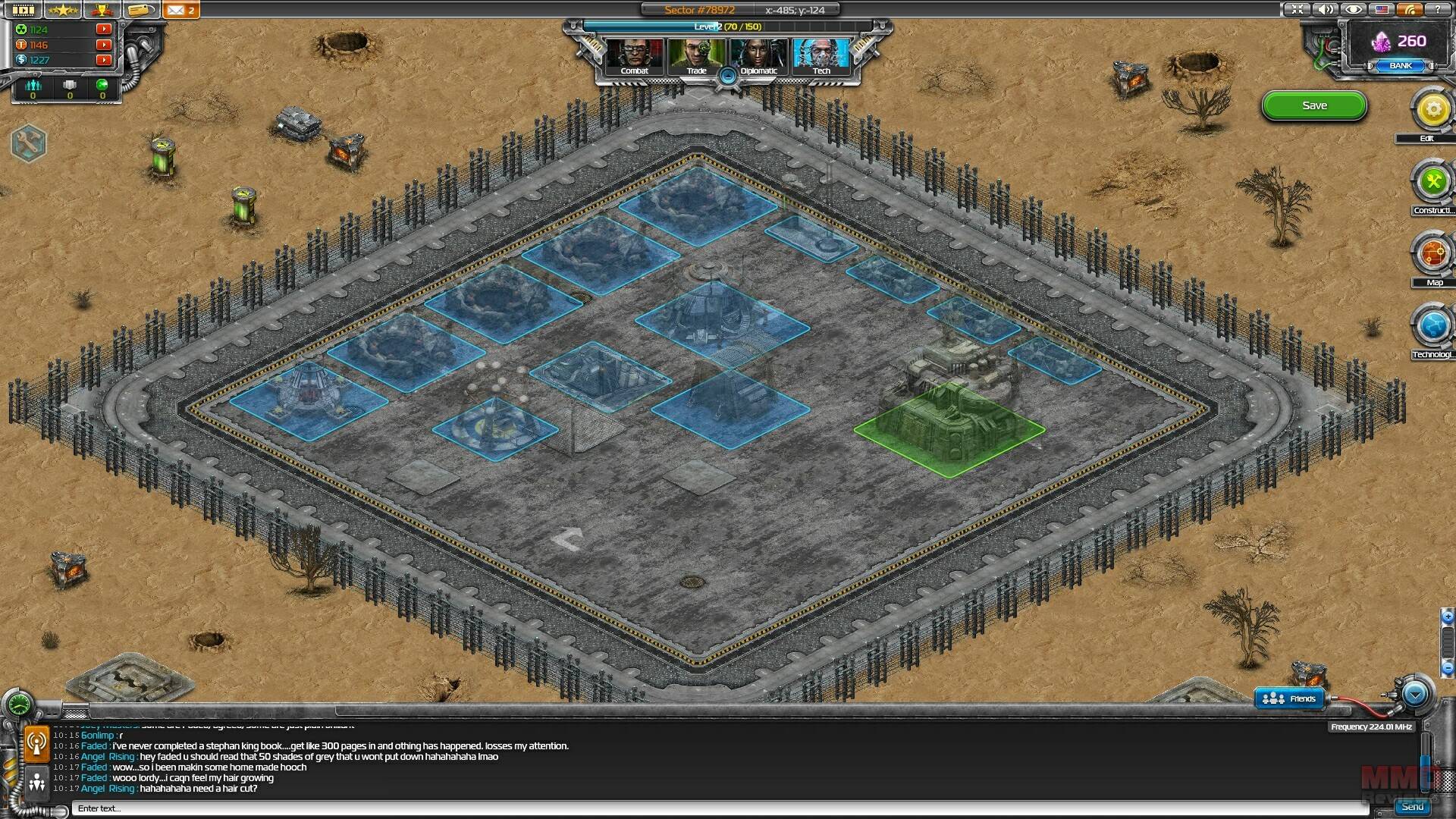 Total Domination: Nuclear Strategy is a free-to-play real-time strategy MMO set in a Sci-Fi universe in which players have to restore industry and civilization on their planet lying in shambles. They will discover lost knowledge and research new technologies in order to develop colonies and create their own empire. Controlling the weapons of the future and leading great armies, they will wage a total and ultimate war for superiority and control of the world’s resources.

After years of brutal civil war, the United World Empire has crumbled into thousands of independent sectors locked in a struggle for resources and power.

Players are put in the shoes of the commander of one such sector and presented with the task to create their own empire and crush their enemies.

There are three main types of resources in the game – credits, uranium, and titanium – which are needed to construct buildings, research technologies, and produce and support military units.

The amount of uranium and titanium players can gain per hour depends on the number of fields they have for each ore. To increase the production of resources, you have to construct and upgrade mines and other resource related buildings such as the breeder reactor and the ore refinery. The amount of uranium and titanium you can store is limited by your warehouse capacity which can be upgraded to store more of each metal.

Credits are collected from the sector's population living in the player’s vaults. Building and upgrading vaults and the Financial Corporation will increase the rate at which credits can be collected. The amount of credits that can be stored is limited by the bank's capacity that also has to be upgraded to keep pace with production of resources. Credits are especially needed to maintain the military units. When players run out of credits, their units will gradually be dismissed.

Excess resources or credits can be exchanged with other players at the Trade Gateway, gifted to friends and allies or stolen from other sectors during raids.

From their private military base in the wasteland, players will defend their sector, harvest resources, and build an army. The sector’s defence will not only depend upon the strength of their defensive forces, but is also connected to the number and advancement of their technologies, emplacements, and improvements.

Vast deposits of free resources, which offer either titanium, uranium, credits, crystals or artefacts, lay hidden out in the wastes. Sectors that manage to capture and control deposits have a major strategic advantage in wasteland warfare. In order to detect new deposits on the map, players will need to develop a radar system and the Industrial Syndicate in order to capture them.

Total Domination requires players to develop new technologies in order to unlock new types of buildings and units. For most of these technologies, a varying number of specific modules has to be collected before being able to begin research. Players will receive a new module from their Tech Advisor every day they play the game and can also trade them with other players. Once researched, each technology can be further upgraded to higher levels. The higher the level, the stronger its related military unit or production attribute will be.

The game features more than 30 different units which are divided into offensive and defensive ones, except for Cyborgs that are almost equally balanced for both. Each military unit has a set resource construction cost and an hourly credit consumption rate. Upgrading technologies or activating certain artefacts can have significant impacts on unit performance and maintenance cost. In order to unlock new, more powerful units, players will have to research new technologies and construct new buildings.

Artefacts are power pieces of lost technology than can alter certain attributes of military units and the player’s sector. Fighting enemies or capturing and controlling warp gates, pits, marauder bays or ISS ships offers the chance to acquire new artefacts with different impact: some offer offensive bonuses while others improve the defensive attributes of various units or mainly improve the industrial performance characteristics for the entire sector (resource production, defence bonuses, etc.)

Artefacts can have either permanent or temporary durations.  Based on their power and trade-offs, they are classified as basic (minor but stable effects), compound (strong positive and negative effects) or legendary (extremely powerful, rare, and difficult to acquire). Regarding their potency, artefacts are further categorized within each class as serial, special, elite or unique. Each of these categories includes more commonly found items and a few rare items that are highly sought after.

Clans enable players to unite their allies in a well-organized command structure under one name, banner, and hierarchy. Each member is given their own credentials, duties, and responsibilities within the group. A clan's discipline and coordination are shown with a direct visualization of their political influence on the imperial map as they work to control emitters (ancient machines scattered across the wasteland) and compete for top placement in the clan rankings.