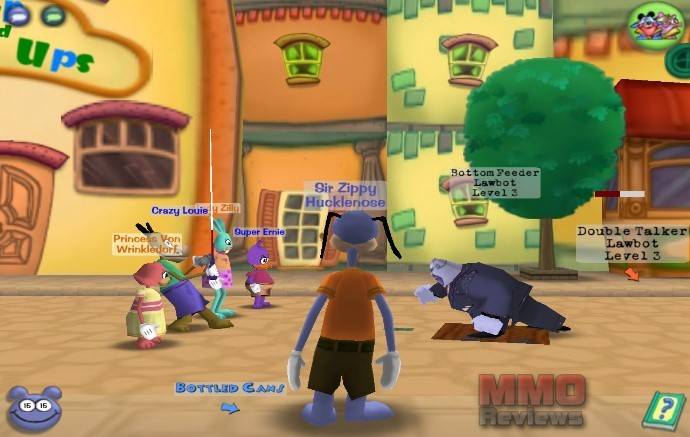 Developed by Walt Disney Internet Group for Windows and Mac.

Toontown is a mmorpg with a 3D virtual world which takes its theme from the colorful style and humor of classic animated cartoons, packaged into an online game experience that its authors claim is social and kid-safe.

According to the story of Toontown, the Cogs are business-loving robots bent on forever changing Toontown into a business empire.

In the game, you can play as any of the following animals: a dog, cat, duck, horse, mouse, rabbit, monkey, bear or pig. Players choose the species and customize the look of their toons when they first start the game.

Advancement in the game requires completing "Toontasks", tasks or "missions" assigned by the non-player characters scattered about Toontown. Completing the tasks earns additional "laff points" for the player's Toon (up to a maximum of 137), new gags, jellybeans (the in-game currency), and a variety of other benefits. Tasks range from simple delivery missions to defeating a Cog boss battle.

Playgrounds are the areas of Toontown that are permanently safe from Cogs. In the playgrounds, Toons can receive new Toontasks, turn in completed tasks, buy new items, play trolley games, or go fishing. Each playground features one of Disney's classic animated characters.

Toons can grow and maintain a garden of flowers, statues, and "gag trees" at their estates. The gags picked from gag trees have higher-than-normal damage capability. Different species of flowers can be grown by planting different combinations of jellybeans. There are forty types of flowers, and a player earns a laff point and a trophy for each ten species grown. Bloomed flowers can be sold for jellybeans.