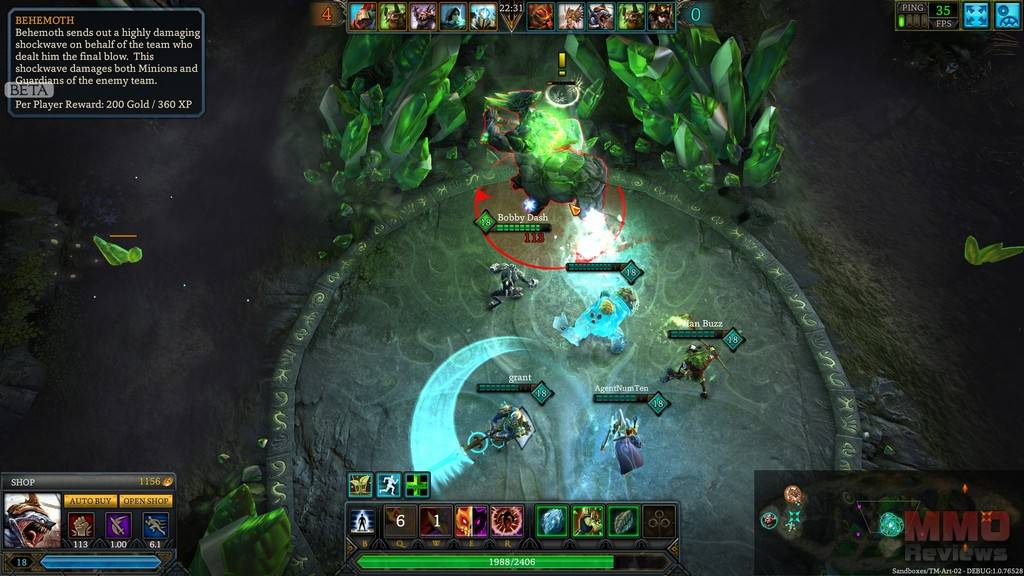 TOME is a classic action-packed strategy MOBA brawler where players can choose from Guardian heroes and fight against each other in team-based arena combat in various game modes on different maps. The game is traditional in many ways to classic 3-lane MOBA, but offers a number of different twists to speed up gameplay and enhance individual customisation.

TOME is in many ways traditional to the MOBA genre offering up team-based 3-lane arena combat where players must push through enemy defences, including towers and minions, and battle AI or player opponents in an attempt to push into the enemy base and destroy their alter.

At the beginning of each game, a players chosen Guardian will begin life at level 1 and through killing enemies and minions they will gain XP that allow them to level up their base skills and unlock their Ultimate ability. During the game, players can also purchase items with acquired in-game gold that will give them perks, bonuses and utility benefits for the duration of the battle.

There are a variety of Guardians for players to choose from in the game, with 20 unique characters each offering a different style of play and players can choose between ranged and melee combatants that focus on specific roles and fall into different domains:

Roles - Filling the various traditional roles in the game such as Slayers that deal extra damage to enemies, Tanks that can soak up enemy assaults as heavily defensive characters, Tacticians that are a traditional support role and can aid their companions in various ways as well as being a bane to the enemy, and the Pushes that help a team make their way down the Lane by destroying minions and towers.

Domains - Each Guardian falls into one of six different domains: Creation, Air, Water, Fire, Earth or Death, which primarily affect their visual look and style of abilities but also links to players earning Blessings. By playing with Guardians from a particular domain players will unlock various tiers for that Domain that they can gain Blessings to equip their Guardian prior to entering a battle for extra bonuses.

Customisation - Players can purchase a variety of items during the game from acquired gold that will boost them in various ways, typically attacks and defences, however players can also earn Relics when they compete in PVP combat. These relics when equipped can drastically change how a Guardians’ abilities perform in battle, offering up a new level of customisation for players.

There are a number of differences within the game that gear the game towards being a faster match, typically around the 20-minute mark, something that many MOBA are trying to work towards instead of being an hour long slog. Some of the key features that have made this possible are:

In-Lane Healing - Where other MOBA require players to head back to their base to heal, effectively taking them out of the battle for a constant trek back and forth, TOME allows players to heal up whilst out in the lanes and keeping them in the action

In-Lane Purchasing - Similar to above players do not need to head back to their base to purchase their items and instead can buy them instantly while still engaging in combat, once more avoiding the downtime travelling back and forth

Minion Advancement - As players push down a lane and manage to successfully destroy towers the minions of that lane will become progressively stronger, making that lane even tougher to defend for the opposing team and potentially leading to an easy victory

Shorter Cooldowns - There is often nothing worse than having to wait minutes for your favourite ability cooldown to finish, with shorter cooldowns players will be constantly throwing out their most powerful attacks leading to a more ferocious battle