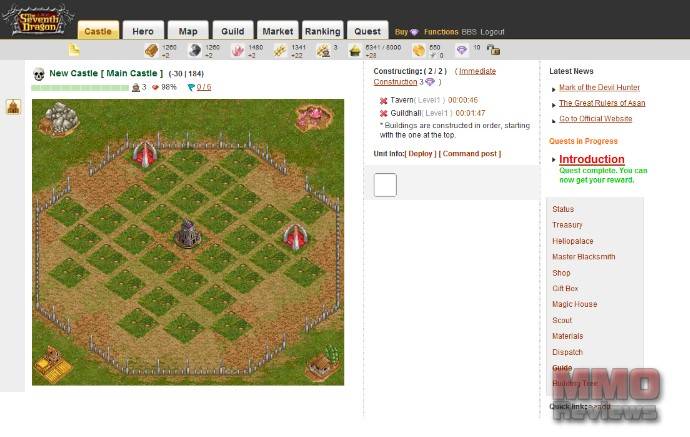 The Seventh Dragon is a free to play strategic battle browser game set in a gigantic fantasy world. Six large races fight to rule Asan Continent with its vast area and bountiful resources. At the same time, the Devils are occupying the castles of the races, leading to the risk of world destruction. This is the where the story of the Seventh Dragon begins.

The Seventh Dragon uses a persistent system that continues the game even when off-line. It's possible to play by giving instructions to your characters and setting production commands, then check on the results later.

It is the 28th year of the Chronicle of the Seventh Dragons. The Asan Continent has fallen into tumultuous chaos caused by the marauding Devils and widespread looting by the Rebel Army. Mistrust among the Human, Elf, and Undead races reached a peak when the Devils conquered all the castles belonging to the Humans, Elves, Dwarves, and Dark Elves.

Survivors of the Devil’s onslaught have gathered under Master Magician Salem, the current incarnation of The Seventh Dragon. Heroes and knights from each race assembled at the Heliopalace to recapture their lost capital, build cities, battle foes, and save the world from the conquering Devils.

Each race has its traits and various soldier units. The way these are combined will be the key to victory in battle. Also, having the Heroes you train fight other players' Heroes and attack their castles gives a fun PvP element to the Seventh Dragon aside from the strategic game.

Human
A race that worships light. They place more importance on "human morals" than "law and order".

Elf
A race that worships nature. Possessing beautiful features and hearts that love the forest, they value cohabitation with nature.

Undead
A race that worships death. Death means tranquility for the Undead. It also means order and beauty.

Devil
A race that worships chaos. They believe in the survival of the fittest, taking pleasure in mercilessly pursuing the weak, and seeing them suffer pain and stress.

Neutral Monster
They don't participate in the war, but can sometimes help a Player.

Resources are produced in the Resource Areas inside the castle (Lumbermill, Quarry, Crystal Mine, Farmland). Increasing the level of each Resource Area increases the amount of resources produced per hour. The castle needs resources of Lumber, Stone, Crystal, and Food to prosper. Use the method below to obtain resources.

Training Heroes is perhaps the most outstanding feature of this game. Attacking, hunting and collecting are all accomplished by dispatching heroes. Heroes' abilities affect the units that the Hero leads. Heroes can gain levels with the experience points they gain from attacking a Devil Castle, hunting (in Forest, Swamp, Mountains and Hill areas), and attacking other players.