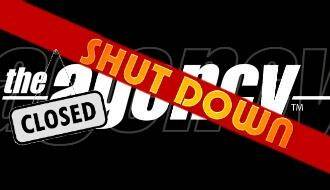 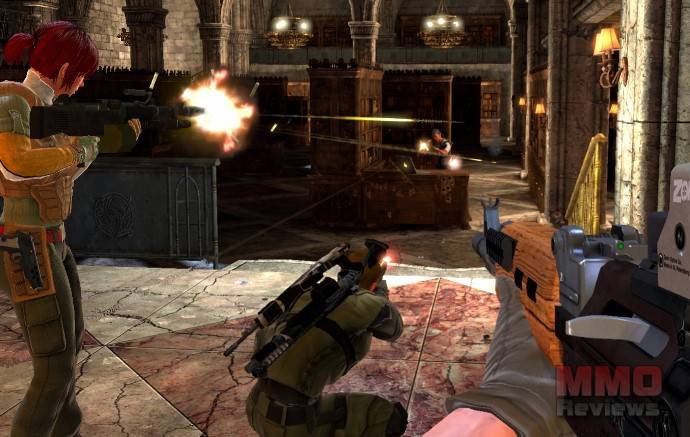 Developed by SOE for Windows and PS3.

The Agency: Covert Ops is a spy-themed massively multiplayer online first(and third)-person shooter. It uses Unreal Engine 3. Upon starting the game the player has the opportunity to join one of two agencies, which will determine the style of missions they receive during gameplay.

The world is not a seamless environment encompassing the globe. The environment of the game is being developed around a hub and spoke system where public areas can branch off into other public zones or private areas. Players will be able to encounter other players in public areas who can join them as part of a team to help complete objectives for an assigned mission. Most of the title will be focused on player missions that can be tackled solo or with up to three other members as a team during a mission. This number can increase to eight players during what have been called "crossover" missions, up to thirty two players in any area during PvP battles. Players will also be able to walk to destinations close to them, but will be able to take trains, planes, or other means of transportation to get to far off locations such as other cities or areas.

The United Network of Intelligence and Tactical Experts (U.N.I.T.E)
The world's most elite secret agents. They are the forefront of the fight against terrorism, corruption, and rogue states around the globe. U.N.I.T.E. agents are deadly specialists in stealth and subterfuge, with access to technology the public has never seen before.

The Paramilitary Global Operations Network (ParaGON)
One of the largest private armies in the world, serving clients both upstanding and unsavory. ParaGON's efficient, honorable, and often unconventional mercenaries can be found putting duct tape and high explosives to new and exciting uses on every continent.

The game will feature first-person shooter-style gun fighting, with the ability to switch between third and first person views, with some driving and other vehicular segments as well. Skill will be the primary determining factor in the success of the player, though some RPG elements will come into play as well. It has been mentioned that one shot to the head will instantly kill any player, suggesting it will be a somewhat realistic shooter. The game will also include relevant subgames and minigames, among them casino games such as Texas hold 'em, which can be played for fun or can be used to initiate instance missions, such as losing or winning enough games to draw the attention of an NPC.

PvP will also be introduced as an option for players, not as a requirement for play. The user interface will be streamlined in comparison to most massively multiplayer online games, operating more like that of a shooter game to increase ease of interaction in the environment and streamline the combat and inventory processes.

Players will also be able to switch roles depending on what gear their avatar decides to wear. Players inclined to pursue an assault class will simply need to wear assault-type equipment, stealth players will wear stealthy equipment, and so on, negating the need to create a new character type every time they wish to experiment with a different play style. The amount of gear and costumes that each player will have access to will grow as they accomplish tasks within the game, allowing for more options. There will also be a firing range-type environment available for players to test weapons and gadgets.

Players will complete missions to acquire new Operatives. Different types of Operatives will supply the player with anything from in-mission hints to advanced vehicles. Operatives can also initiate instance missions, by calling for help when they are in trouble. Better players will be rewarded with access to the better Operatives to add to their teams, making those players even stronger. Operatives will be stylistically represented as trading cards, which can be sold, auctioned, traded and given to friends and other players.