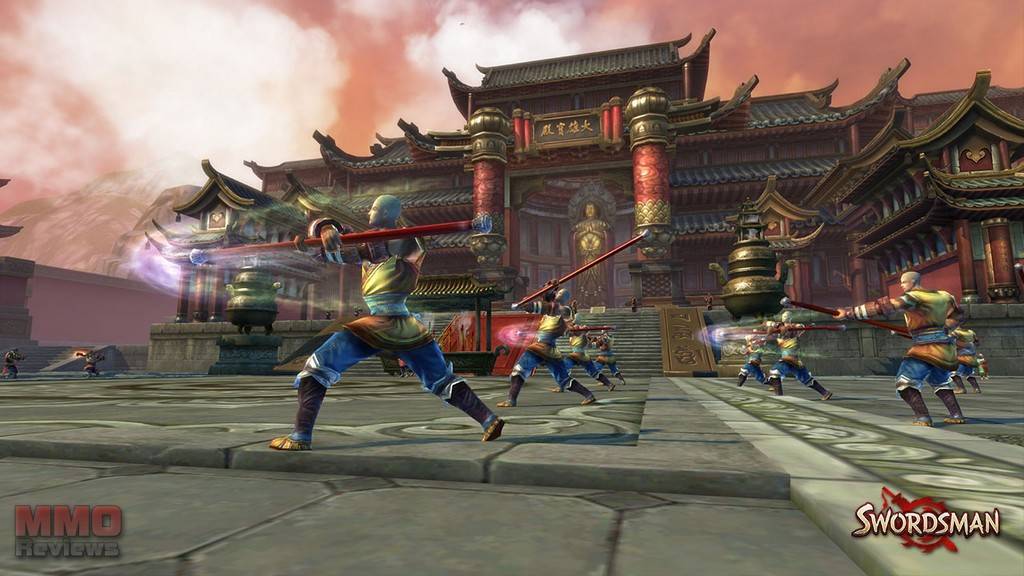 This free to play MMORPG is based upon the wuxia novel “The Proud Smiling Wanderer” by Louis Cha, which is extremely popular in China, and revolves around a time where martial arts schools ruled the land in ancient China and a bloody war has broken out as these clans fight each other trying to recover a lost Kung Fu manuscripts that teaches sacred arts.

Players start out their journey as the sole survivor from a village that falls under the attack of a band of assassins that have invaded during the night killing everyone whilst they slept. As a last act the villages’ elder chief gives the player a sword and send them off into the night only to be pursued by these assassins acting out their unknown agenda. When all is thought lost, confronted by a powerful assassin martial arts expert, your own saviour steps into the fray and helps you escape.

In the player’s search they will uncover rumours of the legendary Exorcist Swordsmanship Manual circulating and talk of its existence, in time finding out that the attack on their village played a part in this fabled artefact. All across China the martial arts clans begin their search and now Jianghu is on the brink of all-out war.

There are 10 key clans within the game that is set within the time of the Ming Dynasty in Jianghu, a land ruled by powerful martial arts clans. Players are able to join many of these clans, make allies and also enemies.

The Righteous Schools - these are seen as the most traditional schools; E’mei, Wu-Tang and the Shaolin

The Orthadox Schools – five clans that have banded together, self-titled “orthodox schools”, to form the Five Great Mountains Alliance made up of the Splendor School, Infinity School, Harmony School, Eminence School (unplayable) and Majesty School (unplayable)

The Unorthadox Schools - made up from the Sun and Moon Cult and the Five Venoms Cult, these two have been in decade-long feuds with their rival clans using many practices seen as sly and deceitful

There is a long story arc that players will be able to uncover as they play the game which will expand on the story of the Exorcist Swordsmanship Manual, as well as individual plots revolving each school and also various missions and quests that can be found throughout the world. Players will travel to various locations, from distant mountains, ancient caves and ruins to bustling cities including some famous locales like Fu Giu City, the Shaolin Temple and thend the Wu-Tang Mountains. During their adventures players will come across a number of different characters seeking help all looking to stop the player in their search.

One of the larger features in the game that offers much more than many other MMORPGs is the formation of player Guilds, more than simply a title above the players head they will offer a completely new experience for players. Players in a Guild will get the chance to partake in unique events that will occur across the world and call them into action, such as murder mysteries that send them looking for clues or being charged to defend and protect key VIPs are going head-to-head against rival clans. Each Guild is able to build their own base of operations that they will gain bonuses from and from here they will be able to do battle against rival Guilds and fight for territory.