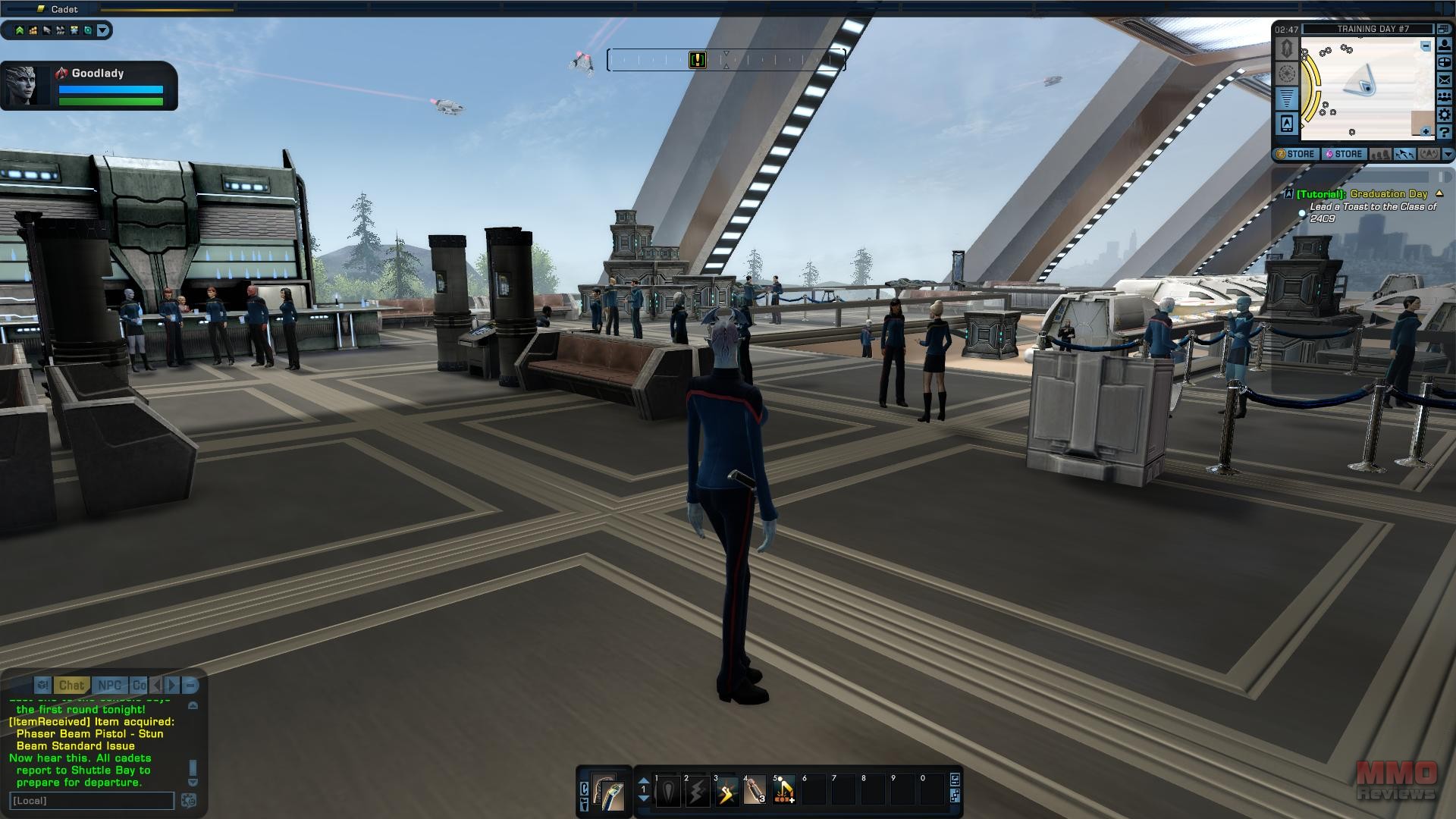 Star Trek Online is a free to play MMORPG set in the vast universe of Star Trek.

It features customizable ships and characters from the Klingon Empire and United Federation of Planets, ground, space and shipboard gameplay and unique options for player-generated content.

Through its free to play system, players have the option to purchase services, items and content to customize their gameplay. These purchases expand upon an already complete experience and allow you to further customize your characters and enjoy the game in new ways. You can access this new material in the C-Store and use Cryptic Points to make your purchases.

Silver Player chat and e-mail is rate-limited (though you would likely never see the limit if you chat or e-mail normally). They cannot use broadcast chat and may only send private messages (“tells”) to players who are their friends. These restrictions are in place to curtail spammers.

Each player will be captain of his or her own ship, serving either the United Federation of Planets or the Klingon Empire. It also stated that players will be able to beam down onto the surfaces of different planets “for face-to-face confrontations”. Exploration of the inside of starships will, at launch be limited to the bridge and certain episodes (missions) however, it has been stated by Cryptic that they will introduce fully explorable starship interiors not too long after launch.

The game will feature two very different combat systems. Away-team missions will feature fast paced “run and gun” combat. Space combat will stress the long-term tactical aspect of combat between capital ships, in concert with the Star Trek storyline, and will entail positioning, shifting power from weapons to shields, and finding various weaknesses.

There might be a Galactic Economy, which would be based on trade, and might fluctuate like a stock market.[19] It will be possible for players to pool resources to form fleets or guilds. Fleets will be able to build space stations, mining platforms, satellites, shipyards, and more. Quests will be issued from Central Command, and players can join together on the ground. Gameplay will be fully co-operative, and dynamic events will be one part of the game. A “system of infinite exploration” will enable players to find and explore random, uncharted planets.

Ships in Star Trek Online are as much a part of your avatar as your captain or Bridge Officers. Theyre highly customizable, both cosmetically and functionally. Visiting a ship tailor will allow you to change the color of your ship, the nacelles, the neck and/or nacelle pylons, its saucer, its name, its registry number and so on. And since ships have paperdolls and Bridge Officer stations, the decisions you make in how you outfit the ships weaponry, impulse engines, shields, deflector dish and mods guarantee your gameplay experience will be unique to other players, but at the same time still feel like Star Trek.

Players are awarded ships by Starfleet as they progress in rank and invest skill points in piloting the ships theyd like to fly. Once players reach the rank of Lieutenant Commander, theyre able to begin choosing from three separate types of ship: Science vessels, Escorts and Cruisers.

Escort Ships
These heavily-armed warships are built with the firepower to defend the Federation. Escort vessels are armed to the teeth, fast and maneuverable, which makes them a hard target to hit when theyre moving evasively. They are ill equipped to deal with advanced science or engineering tasks. Their lack of adequate medical facilities will hinder their ability to maintain their crew’s health. Fortunately, they are so well armed and armored that their crew’s health is seldom threatened.

Science Ships
Although Science ships lack the massive firepower of other classes, their technology grants them distinct advantages in combat. Their advanced deflector and sensors can easily identify and exploit weaknesses in enemy ships and target their subsystems, or even detect cloaked ships. Their deflectors can also be used to aid and repair ally ships, as well as control the pace of battle. These abilities allow them to provide superior fleet support, yet they are more than capable to complete missions on their own.

Cruiser Ships
Cruisers are generally the largest ships in Starfleet. Their size grants them access to advanced warp cores, which allows them to distribute a large amount of power across their subsystems; a large crew complement, which improves a ships repair rate, engineering bay, boarding party effectiveness, and so on; and a large inventory, which makes them great for long distance missions. Cruisers have a large warp core and crew complement. Their abundant resources allow them to adapt well to most situations and get damaged systems back online quickly. Cruisers can also support other ships with their massive power supply and crew.

Bridge Officers play a key role in how any ship performs. The player can assign his Officers to specific stations on a given ship. These stations can be Science, Tactical or Engineering stations, and ships of different type favor stations of a specific type, as well. Science ships focus their stations on Science, Escort ships on Tactical and Cruisers on Engineering. The more advanced the ship, the larger number of Bridge Officer stations there are (generally).

Ships are broken into five tiers, including the starting Light Cruiser. The higher the tier, the more advanced the ship. Higher-tier ships offer more weapon slots and Bridge Officer seats. While tier 5 ships can offer an equipment advantage over a tier 4 ship, the power disparity between ships decreases as the tier increases, so an experienced player with a well-outfitted tier 4 ship could be as effective (or more so) as a less-seasoned tier 5 pilot.

In the movie, two characters travel back in time from the year 2387. When Nero arrives in the year 2233, he disrupts the time continuum, creating an alternate reality from the point of his arrival. Star Trek (the new movie) takes place in this alternate reality. This is explained in the film in a conversation between Uhura and Spock on the bridge of the Enterprise.

Star Trek Online is set in the “prime” Star Trek reality. This is the timeline of the five television series and the first 10 movies. It is the world in which the Gorn attacked Cestus III, Kirk fought Khan in the Mutara Nebula, Picard explored the galaxy, the Federation fought the Dominion War, Voyager was stranded in the Delta Quadrant and Captain Archer and the crew of the NX-01 showed us how it all began.

Events in the movie that happened in the prime timeline (the destruction of Romulus, and the disappearance of Spock and Nero) have affected STO.

The C-Store is an in-game and web-based virtual goods shop from which you can purchase items to enhance your Star Trek Online experience. For example, you can buy Retrain Tokens (which allow you to reorganize your character advancement choices), new costume pieces, Captain Rename tokens, premium ships, and much more.