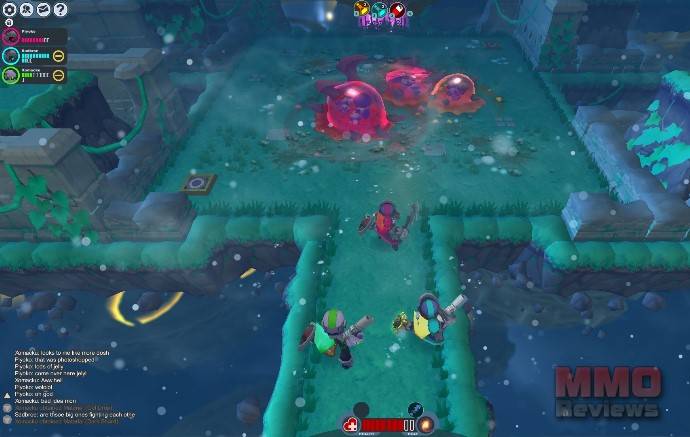 Spiral Knights is a Action free to play MMO with 3D graphics which offers a co-op gameplay within dungeons with monters to fight and puzzles to solve.

Co-operative
The Clockworks offer challenges that are best tackled with friends. Fight monsters, solve puzzles and discover treasures together!

Changing World
The Clockworks cycle levels to explore in real time. Every moment of every day changes the world.

Arsenal
There are hundreds of unique weapons and gear to discover and alchemize.

The Spiral Knights have awoken on an alien world, Cradle. Their equipment stores have been raided and their starship, The Skylark, will not recover from the crash. Now they must work together to survive on a journey that will take them to the very core of the world.

Cradle has an elaborate machinery inside it, called the Clockworks. It is organized into gates that provide access to different sections, levels found in each tier and the subtowns at the beginning of lower tiers.

There are four parts to a gate:

Energy is a special power source that is constantly emanating from the core of the world. This energy can be used for a variety of things: to power elevators in the Clockworks, in crafting, to buy upgrades for your knight, and to activate devices found in the world. There are two forms of energy:

Mist
Due to the intense power source at Cradle's core, the entire planet's atmosphere is imbued with loose, airborne mist energy. Each knight's armor has a reserve tank which will automatically distill mist energy from the air, but can only store 100 units at any one time. If you run out of mist energy, you can either take a break from exploration and allow your tank to slowly refill themselves, or you can obtain some more stable crystal energy. A unit of mist energy recharges in approximately 13.2 minutes; it takes 22 hours to recover a full 100 mist energy.

Crystal
Crystal energy is a form of energy that can be stored permanently, and in greater quantities than the 100 units of mist energy a knight's armor can hold. Crystal energy is purchased with U.S. dollars from Three Rings, or with crowns from other Spiral Knights players via the Energy Depot. To purchase crystal energy, simply click on your energy meter, or visit a Stranger who sells energy. Crystal energy can be traded between players.