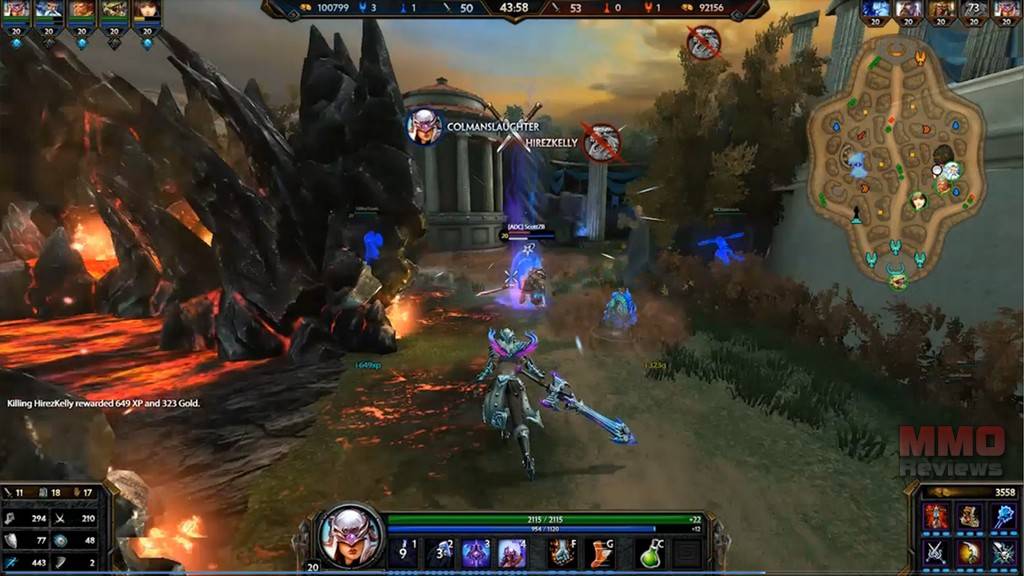 In Smite players take on the role of the various immortals and gods seen throughout religion and mythology, from the Greek pantheon to ancient Chinese deities, the game is a MOBA style battle among gods and the fight for supremacy. Completely free to play players have plenty of gods to choose from as they fight in third person combat, a unique twist on the typical MOBA genre.

Smite plays like any traditional MOBA in terms of its core features, players must choose from a variety of characters, each with their own pros and cons and abilities and fight in team based combat trying to navigate the different lanes, getting past waves of minions and defensive towers and make your way into the enemy base. Along the way players will earn in game XP to level up their character, slowly unlocking new abilities or improving those that have already been learned, purchasing gear and weapons as well as consumables and constantly pushing towards the enemies main base. Fighting past defences is only part of the challenge, players will face off against enemy opponents that are also playing as more powerful gods, either AI controlled or players themselves.

Within the game there are jungle areas, the zones that lie between or to the side of the lanes that connects the two bases. In these jungles players are able to find different AI bosses to fight and if destroyed they will gain temporary bonuses such as improved damage, speed and XP. Whilst in the jungle areas players are invisible on the overhead map and so can be used to quickly move between lanes on seen and set up ambushes.

There are however a number of key elements that make Smite unique from other MOBA games:

Titans - once a player reaches the enemy base it isn’t a simple case of destroying a final building/construction to claim victory, players must face off against the enemies Titan, a huge NPC that hits hard and as its own challenge to kill. Once dropped the victorious team is declared the winner.

Phoenixes - the bases themselves are protected by the Phoenix, one for each lane depending on the game mode, that primarily act as another more powerful tower that you must fight through to reach the enemy Titan. However, this Phoenix constantly regenerates its health and even if destroyed will respawn after several minutes. When one of your phoenixes are destroyed, the enemy minions in that lane will take on a fiery form and become tougher to tackle.

Third person perspective - where most MOBA games use a top-down/isometric camera angle Smite uses a third person mode, which adds a whole new level of strategy to the game as players must constantly monitor the map, their rear and their flanks to ensure they are not ambushed. In other MOBA games it is much easier to see when other enemies and nearby, but if you are not looking at the enemy in Smite it is quite possible to only see them when it is too late.

There are many different types of gods that players can choose from, over 50 at present that are taken from the various mythologies and religions from across the world with some famous faces such as Annubis, Thor, Loki, Hercules and Guan Yu. Every God has its own strengths and weaknesses and unique abilities, as well as having a particular designated role in battle: Assassin, Guardian, Hunter, Mage and Warrior. These roles typically define what job that particular God is designed for, such as being a tank or a healing support, however as players can purchase different items and weaponry in the battle they can try to take on any role that their God may not have been initially designed for and create some interesting hybrids.

In Smite there are various game types that players are able to join, trying them in practice mode, normal mode or even league matches:

Assault - players must choose from random gods in a map that only has a single lane, no jungle and is a 5v5 lane push into the enemy base

Joust – One lane for 3v3 action and side jungles