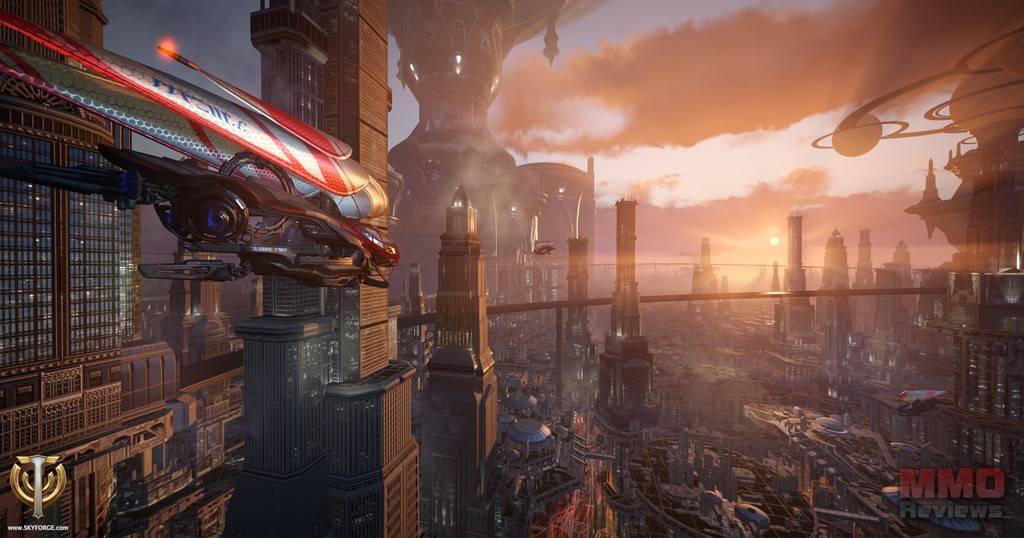 In Skyforge players step into the role of the Immortals, near godlike beings set to defend the world against the invading forces that wish to claim its lands and people for themselves. A fantasy meets sci-fi free to play MMORPG that is being developed by the combined forces of Allods Team (Allods Online) and Obsidian Entertainment (Fallout: New Vegas, South Park: The Stick of Truth).

The world of Aelion is in peril as its greater God has disappeared, the one true protector that was able to fend off the envious eyes of the lesser gods wishing to claim his domain. Now the task of defender full is to the Immortals, men and women able to become Gods themselves to hold back the invading enemies.

The world now locked in war these Immortals rely on their use of futuristic technologies to fight their opponents on all sides, protecting the people and common folk and even ascending to become Greater Gods.

The game will have between 10 and 15 classes that players can choose from, with more to be added once the game goes live. Each class will have its own different play style, however players can switch between the different classes at the click of a button. Two currently released classes are:

The Paladin - using their own divine energy enables them to empower their blades and act as defenders of the needy and weak. Using their powers the Paladin can often be seen carrying their seal which acts to inspire their comrade’s and strike fear and helplessness into their opponents.

The Cryomancer - able to harness the air’s energy using their portable cryogenerator, the Cryomancer is able to fire and icy missiles and blustery snowstorms at their opponents, often freezing them into icy statues.

Combat itself takes on an action-based style that is very cinematic and consists of explosive, exaggerated attack combos, huge weapons and unnaturally athletic manoeuvres that both set the tone of combat and promote the idea that the player characters are Immortals on the path to becoming gods. Players can perform many actions and attacks with the push of a few buttons and the mouse, depending on the order that they push them and other actions, each class uses the mouse differently to perform their attacks. With the huge score of personal customisation options and the more flexible classless system, players are able to create their own templates and builds to define their role and make a character that plays how they want them to play.

Progression through the game takes on many theme park type quest story arcs where players will further the storyline by completing staged quest chains as they level up and head across the different regions of the world. However, away from these more static events players can also find other activities around the world that range from group and solo-based play, dungeon runs, PVP battles and other events taking place in the open world and closed off instances. There is a map room system that allows players to gain an overview of all the different events that are occurring and allows them to quickly get involved.

As the game is a blend of both sci-fi and fantasy the game world explores this contrast with the various locations that players can visit. For the more sci-fi themed areas players can visit The Factory, and military construction factory that once assembled advanced AI mechanise that has now been taken over by these very constructs after they destroyed the "biological contaminants" that had infected the area. Alternatively players can explore the more fantasy focused Dankit Island which is now run by the combined forces of the new rat-type Virth that have invaded from another world and the Scavangers who worship a dark God known as Thanatos.