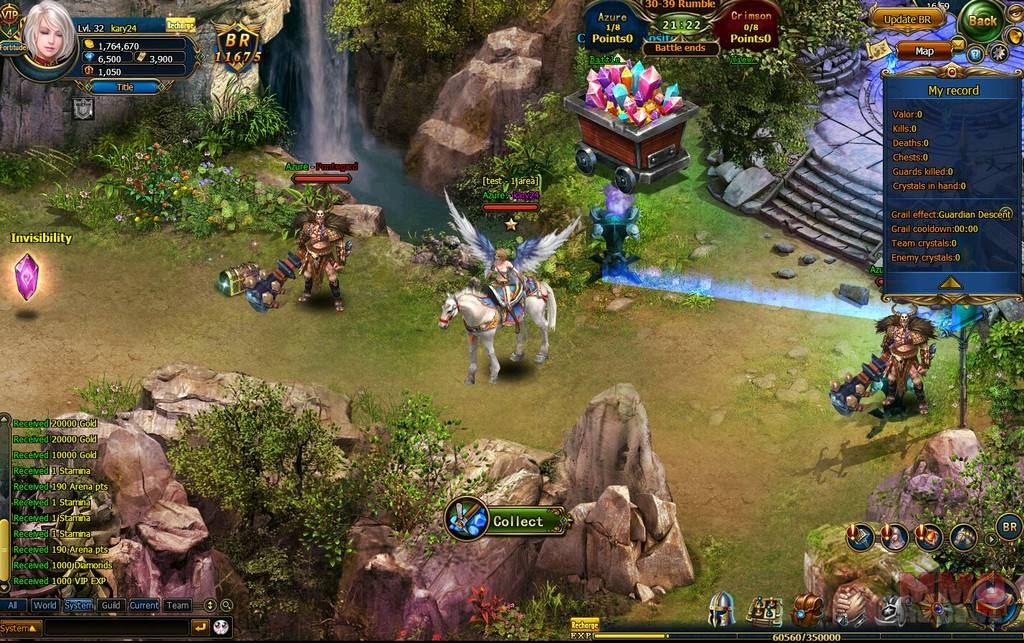 Shadowbound is an exciting story of adventure and battle of good versus evil where players must set out and build up their own party of able heroes as well as gaining the service of legendary Guardians that bestow their abilities during battle and help defeat enemies. The beautifully designed illustrative graphics enhance the fantasy gameplay and show off the capabilities of a browser-based MMO RPG, which is absolutely free to play with a number of premium optional elements available.

Celeste, the Guardian of Light has been sealed away by the invading shadow roles that have tainted the world and stolen the Mystic crystals. New heroes rise to battle back the powers of evil and bring the land into a new dawn and restoring the light of the world.

The core gameplay primarily focuses on hero party building, where players must try and acquire increasingly improved tiers of gear, companions, titles, mounts and other improvements to increase their parties Battle Rating. The Battle Rating is a publicly viewable value of how strong you are in comparison to the games PVE challenges and other players when in PVP. Practically everything in the game can be improved, from characters levelling up to improving the quality of your gear and items with the endgame revolving around PVP and players battling each other for combat ranking.

There is a wide variety of ways to improve your Battle Ranking:

Gear - in the game both the players main character and their accessed mercenaries are able to equip six types of gear equipment including a weapon (determined by their class), necklace, ring, armour, boots and helmet, all of which provide bonuses to different stats and come in different rarities and qualities

Mounts - unlocked at level 15 players are able to use mounts to move around the world faster as well is gain boosts to their Battle Rank, some mounts are also able to learn mount skills once they have reached level 4 and players can also acquire special mounts from events and quests to have a unique appearance

Talismans - players are able to gain access to talismans that give them passive skills and can be equipped to either the main character or any unlocked mercenaries, as characters level up they are able to access more talismans slots

Titles - as well as allowing players to see your accomplishments and by the title that shows above your head these titles also give access to stat boosts and can be managed from the Title panel and some titles are even unique to only the top five players on the PVP leader-board.

There are lots of different features available in the game for players to enjoy PVE content, from questing, dungeon instances that can be tackled solo or specialised dungeons made for multiplayer groups and number of different features that give players access to new rewards and resources.

Players can step into the Arena and battle other players in the hopes of earning glory and Honour, special points that can be spent to extra, with players battling each other for position at the top of the Arena leaderboards where the top players gain more Honour each week.

For those that don’t want to do much combat and like to take a break from it they are able to tackle the Battle of Wits, where players are challenged by asking them true or false questions and they must give the correct answer in order to win great prizes.