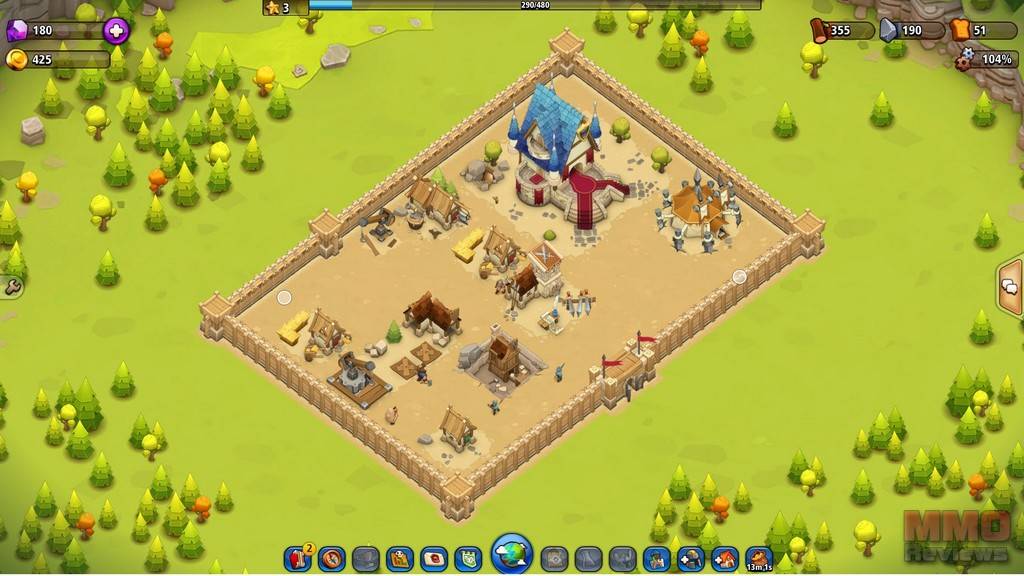 Shadow Kings: Dark Ages is a browser MMO that focuses on building up your own city and advancing your empire through trade, diplomacy and conflict with both the enemy AI and also other competitive players.

Players are tasked to build up their own city, responsible for gathering up the necessary resources, constructing important buildings that will give them access to more features as well as allowing them to upgrade them to make each building more efficient and productive. With the construction of Barracks, players must also begin to field their own superior military force in the event that they are attacked by strategic AI orc attackers or even rival players that control their own cities and seek to plunder their hard earned resources. The game has PVE elements, but focuses primarily on PVP between players from all across the world as they fight for pride, resources and status.

The first thing any city leader must focus on is bringing in resources. By constructing specific buildings, players will be able to increase their own resources that will in turn help progress and advance their city. Building a Stone Quarry provides players with stone, which is used in the construction of other buildings often along with wood, which is acquired from a Woodcutter's Hut, though wood is also a key component in creating military tools such as a scaling ladder and battering ram to be used in combat. Farms create food which is used up every hour by the military units, requiring a constant income of enough food to support the army. Players must construct housing to increase their populous and whilst they are not a resource themselves, they do directly affect the amount of gold income that a player can earn through taxes and also create a more productive city.

Aside from production buildings, players are also able to use resources by completing a variety of Quests, which will charge the player with certain objectives such as building a specific building, attacking a Shadow Camp or other ways that ultimately guide the player and teach them about new features.

To support a growing city, the populous must be kept happy and players are able to construct decorations in the form of banners, lampposts and other decorative elements to increase the people’s happiness and keep them productive.

There is a number of available Military Buildings that players can construct including Mystics Towers , which allow players to use espionage and sabotage tactics against their rival prior to attacking them with their army. Players can construct Guards Towers around their city walls that can block any espionage attempts by a rival player on their city. Other buildings such as an Apothecary can be built at later levels and give access to special herbs to ensure that a minimum percentage of defenders will always survive a battle.

Axe Warriors, Rifleman, Paladin’s and even Gryphon Knights are all available to be trained up by a player, each unit having a certain Barracks level requirement, which must be upgraded before the player can train the later units. Upgrading to a specific building level is only available once a player has levelled up their character to meet those requirements. Players can level up through completing quests or been successful in battle by attacking the AI or other players.

Each unit has a particular strength against a certain type of unit, but is also weaker against others and so a balanced army is required to find victory in battle. When two armies collide, the computer will automatically work out the victor from the combination of units used as well as the amount of attackers involved versus the number of defenders.

As well as the normal standard resources available in the game, players have the option of using Diamonds that can be purchased with real-world money and are used to give players perks and bonuses in the game, everything from instantly completing a build, purchasing boosts from the magic shop to buying certain unit types and tools that are otherwise unavailable. Aside from buying Diamonds with real cash, players will also earn them by levelling up their character, thus gaining a steady income of them just by playing the game.