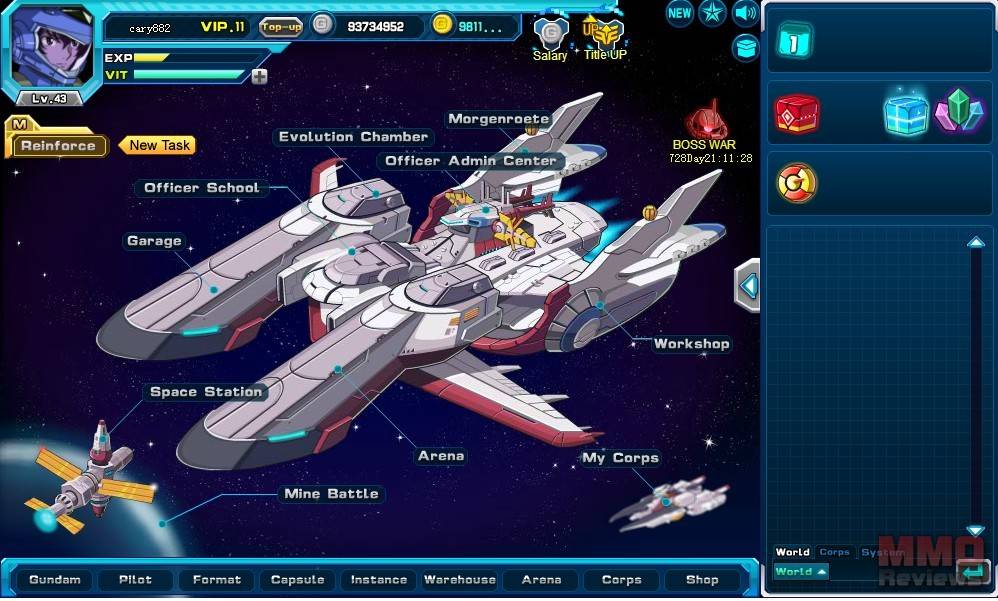 In SD Gundam players are responsible for gathering up their own giant robot Gundam "Mobile Suits", creating their very own militarised base and working towards being one of the strongest players in the game. The SD Gundam game is based on a popular manga anime Gundam SEED, which had a "Super Deformed" (SD) spinoff named SD Gundam, based on a different style of anmie. The MMO is free to play through Internet browsers and does not require a client download.

In the distant future Earth as we know it has expanded up among the stars establishing colonies across the Galaxy that whilst lived harmoniously for a time it was not long until conflicts began to break out between the two main factions. In normal inhabitants of Earth known as the "Naturals" were continuously at odds with the genetically enhanced "Coordinator" humans that lived in the various space colonies. The Coordinators created their own independent organisation known as PLANT and their own military branch called ZAFT, which would continuously launch attacks on Earth in an attempt to steal Earth’s Gundam Mobile Suits.

After one attack too many Earth retaliated with force, launching a new to strike on one of PLANT’S agricultural satellites that was completely destroyed, and now full-scale war has been declared between the two factions.

The main purpose of SD Gundam is players to gather various Gundam and Pilots to create powerful battle formations that are used for PVP and PVE, players can have no more than three Gundam in their formation at any one time and so upgrading them or trading out lower level Gundam for higher quality ones is the main principle of gameplay. Each Gundam must take a position on the front, middle or back line of the formation, which determines who receives damage first and so part of the strategy is putting more defensive mechs on the front line and the weaker ones to the rear.

With various features in the game many of them require “vitality”, a gauge that depletes over time with different actions the player takes, such as attempting to beat an instance that is particularly challenging. When players vitality runs out they cannot perform any more actions until they have rested and replenished their vitality, which recovers a single point once every 5 minutes, or alternatively they can purchase instant replenishes using real money.

Each Gundam has to be accompanied with its own Pilot, both the Pilot and Gundam coming in five different qualities: White (C), Green (B), Blue (A), Purple (S) and Orange (SS), which determines the individual Battle Power of each of them, but gives a combined Battle Power for them both when in formation. Gundam can be upgraded inside the unique Evolution Chamber and learn new skills, whereas Pilots must attend the Officer Admin Centre to train or retrain their attributes and learn new talents, which will once more increase their Battle Power.

There are two different types of instanced challenges that players are able to attempt, a Normal Mode and a Hero Mode. Players can try to challenge a Normal instance as many times as they like as long as they have the required amount of vitality to do so, but players may only attempt Hero instances once per day. The Hero instances are much more difficult to complete, however they will reward player with much more lucrative and rare items such as the core materials that are required for a player to upgrade skills.

Players can test their skills and formations against other players in the battle Arena, where they can compete against each other to improve their PVP Military Rank. In order to be recognised for ranked gameplay the player must register themselves each week, once done any PVP they engage in within the arena will go to their overall Rank. Rank not only identifies a player’ ability and PVP, but also gives them greater rewards when winning battles in the arena, as well as giving them passive damage and it defensive bonuses depending on what rank they have achieved as well as the perk of being able to cash in their rank wages daily to gain a large amount of currency.