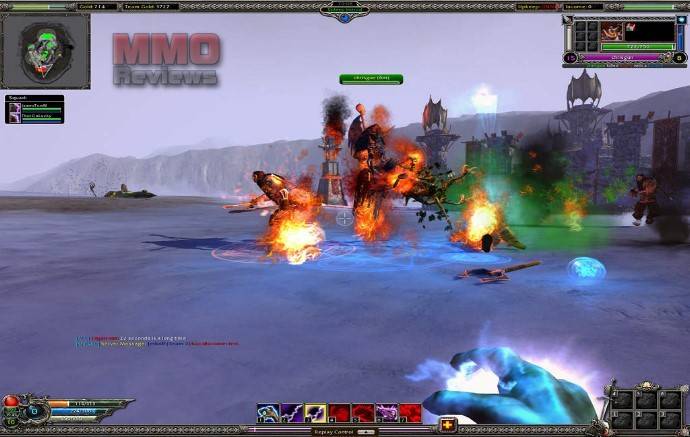 Developed by S2 Games for Windows.

Savage 2: A Tortured Soul is a fantasy and science-fiction themed video game that combines elements of the first-person shooter, real-time strategy, and action role-playing game genres. It is the sequel to Savage: The Battle for Newerth.

A game of Savage 2 plays out much like a regular RTS game like Warcraft 3 would, requiring the commander to build buildings in a birds-eye perspective. Except in Savage 2, the remaining players take control of the units in either a third or first-person perspective.

The melee system has dramatically changed since release in an attempt to be more forgiving to new players. In the new melee system there is no interrupt action, and you have a "block meter." If you are struck while blocking the block meter depletes and the attacker gets a debuff that slows them slightly. The block meter can take one full attack (3 swings for most units, 4 for the marksman and shapeshifter units), but takes more damage from special attacks or jump attacks than it does from a normal swing. If the block meter is completely depleted or "broken" the blocker is stunned for a few seconds. Since by the time you break a block meter you are too slowed to chase down the stunned unit, it is not recommended you try to break a block without assistance.

The main staple of the Savage 2 economy is gold. The slow way to earn gold is by killing NPCs amd other players, and destroying enemy structures. However, it is mainly gathered for team use from mines sprinkled throughout maps. To extract gold from mines a team must build an extractor on the mine. (Legion of Man’s Steam Mine or Beast Horde’s Mine Grove).

Gold Mines are the main source of income for teams. Controlling Mines and defending your extractors is crucial to your team success.

Upkeep is Savage 2’s unique economy system that prevents long stalemates in gameplay. As long as you have a gold mine that is being harvested, your team will have met upkeep.

When upkeep is not met building armor is significantly reduced and you are vulnerable to attacks by the enemy. Conversely, when the enemy has not met upkeep, the time is right to attack their buildings.

Unlike the Action Players on the ground playing a fast paced FPS/Action RPG style game, the commander gets a traditional RTS interface and top-down view of the battlefield. Their elevated status and control scheme allows them to better plan and communicate that strategy to their team, much like the general of a traditional army.

Commanders also control the economy of the team. They are responsible for bringing in resources to the team as well as building and repairing structures. They can power-build or repair damaged structures through the use of "Repair NPCs" they can spawn and control.

Action players are units on the battlefield that help carry out their team’s ultimate objective of destroying the enemy’s Command Center (Legion of Man’s Stronghold or Beast Horde’s Lair). In order to do this, team work and coordination from their commander is required.