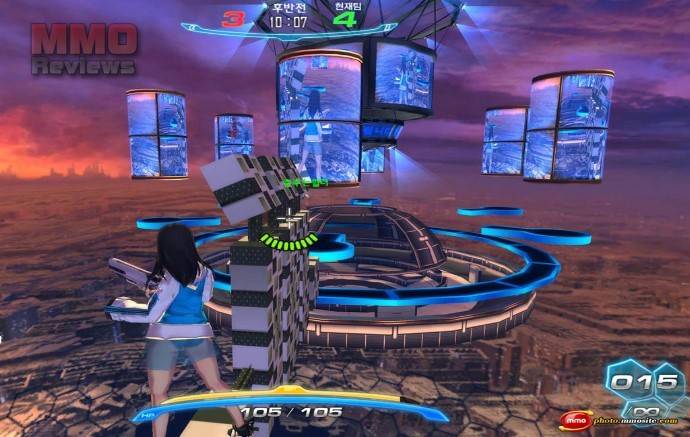 Developed by Pentavision for Windows.

S4 League is a third person 3D Sci-fi shooter. The game is fast paced and set in a futuristic environment. Play online with up to 12 players online in either Death Match (team vs team) or Touch Down mode (capture the flag). Earn in game currency by getting kills and purchase new weapons, skills and clothes in the store.

The title of the game comes from the four "S" words defining this game: Stylish, eSper, Shooting, and Sports.

Style - Find your own style, evolve your own Superhero and become the best S4 player ever. A revolutionary 3D-Cartoon-Rendering technology is the current best one and gives you the possibility of cool stunts and hellacious outfits.

eSper - choose one of many supernatural skills and use them strategically to bring your team to victory.

Shooting - Train all weaponservices and find out which one is your strength. Only the best combination of skills and weapons brings you to pool position.

Sports - Play together with your friends in teams and reach the goal in different moads like "Deathmatch" and "Touch Down Mode". Objective is to catch the ball and bring it as fast as possible to the opponents' goal without loosing it. Just a question of teamwork!

- Touchdown operates similarly to Capture the Flag, in which two goals are set up on either side of a field. A "Fumbi", which represents a ball of sorts, is placed in the middle. A player must grab the Fumbi and take it to the opposite team's goal in order to score a Touchdown. The Fumbi also quickly drains the SP of the player holding it, which can result in the use of skills being disabled until the Fumbi is dropped or the character dies.

- Team Death match places up to 6 people on each team, and has the player fight for a set amount of points, or until the time runs out. Death Match fields are characterized by having many destructible objects in the game environment, such as roof-breaking of buildings and crates scattered strategically around the field.

Along with weapons and skills, S4 sports a large selection of clothing items including shirts, head decorations, pants, shoes, and gloves. All items can be upgraded to give additional bonuses to damage, damage reduction, hp and sp, and other benefits.