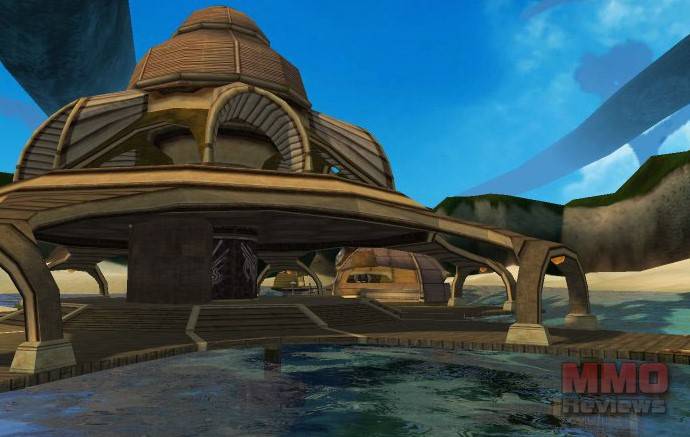 Developed by Nevrax for Windows.

Ryzom, also known as The Saga of Ryzom, is a massively multiplayer online role-playing game (MMORPG), labeled as Science-Fantasy by the creators due to storyline elements that are typically found in both science fiction and fantasy genres, set 30.000 years into the future, on a living, evolving world.

The game takes place on the planet Atys. Unlike normal planets, Atys is an enormous tree large enough to sustain an atmosphere and multiple ecosystems on its surface and within immense networks of branches and roots.

Four distinct humanoid races, or “homins,” came to exist on Atys hundreds of years prior to the game's current timeline (although it is not specified how or why) and developed into separate, fairly isolated societies in their own favored ecosystems. Interacting benevolently with all four homin cultures, but hostile towards each other, were two additional and far more advanced races: the magical Kami and the technological Karavan. The Kami are depicted as elusive, chaotic, playful, and highly protective of Atys, while the Karavan are more secretive and have never been shown outside their environmental suits or far from their machinery.

In the game year 2481, the homin races were decimated when the hostile, insect-like Kitins were accidentally released from their home deep within Atys's root system. Surviving refugees from all four homin cultures began working together in 2485 to rebuild a single, mixed society in relatively remote areas. Soon came the added threat of the “Goo,” a spreading infestation that renders areas uninhabitable and drives wildlife mad with rage. At release, the game year was 2525.

The four races that can be played are collectively known as homin. Each is intimately related to a distinct ecosystem and has its own starting city. There is little mechanical difference between races, and no difference in stats or abilities.

Matis
A proud and noble race of forest dwellers. They have mastered the art that is a fusion of botany and genetic manipulation, and consequently they have constructed their kingdom and castles from massive trees grown for that very purpose. They are closely allied with the Karavan, while their imperialistic tendencies tend to put them at odds with the other cultures.

Tryker
A fiercely independent and hedonistic race of lake dwellers. They build large floating cities on their lakes, and networks of wind-powered water pumps around them. They are officially allied with the Karavan, though many take a neutral path or side with the Kami, which tends to distress the Matis.

Zoraï
A spiritual and tranquil race of jungle dwellers. They build their temple-cities within naturally fortified areas of the jungle. They seek enlightenment through their close relationship with the Kami, whom they revere as the living embodiment of Ma-Duk. Zoraï are born with genetically grafted Kami masks covering their faces.

Fyros
A tough and obstinate race of desert dwellers. They have mastered much fire technology, which they like to build into their weapons and architecture. Though not prone to religious belief (preferring to see tangible evidence where possible), they have allied themselves more with the Kami and Zoraï in recent times, a process much influenced by the friendly relationship between their rulers.

Each character gains levels independently in the fields of weapon-oriented fighting, magic, crafting, and harvesting simply by performing appropriate acts. Each level gained in one of these fields awards the character 10 skill points that can be spent on new abilities specific to that field, spent on general character improvements, or simply saved.
All abilities are built of components called stanzas. Each stanza defines one of the ability's effects, costs, or usage restrictions. Players may assemble actions out of any legal combination of stanzas their character knows. For example, if a player wanted to make an attack that strikes all enemies which are engaged in melee with a circular weapon swing, causes extra damage, and also leaves its victims bleeding, he would assemble the Circular Attack stanza, an Increase Damage stanza, and a Bleed stanza.

Components for crafting can come from the corpses of killed animals or from hidden resource deposits scattered throughout Atys. Different ingredients provide varying benefits to different characteristics of the finished object. For example, when crafting a mace, using a certain kind of animal bone for the head may produce a hard-hitting but slow weapon, while using a particular wood may produce a weapon that is fast and gives a large bonus to parrying enemy attacks, but causes less damage. Further complicating things is the fact that any ingredient may occur in one of five classes and with a quality from 1 to 270, all of which affect the attributes of the final product.

Ryzom Ring allows you to create your own role-play and RPG Adventures on Atys. By travelling in the world of Atys you will open up access to more and more landscapes and NPCs to use in your own role play adventures, culminating in our MMORPG's entire bestiary and a huge number of different terrains across all of the different ecosystems and environments of Atys. In just a few clicks you will be able to layout the scenery and NPCs of a new role-play or RPG scenario and to open it up to your fellow players.
The mmorpg editor tools are both feature-rich and easy to use. While a newcomer can have a role-play and RPG scenario of their own up and running within just a few minutes, the experienced designer will find all the depth they could hope for. The possibilities are endless, from creating role-play and RPG quests, traps and puzzles for the players to completely autonomous set pieces with NPCs acting out the roles play that they have been given.