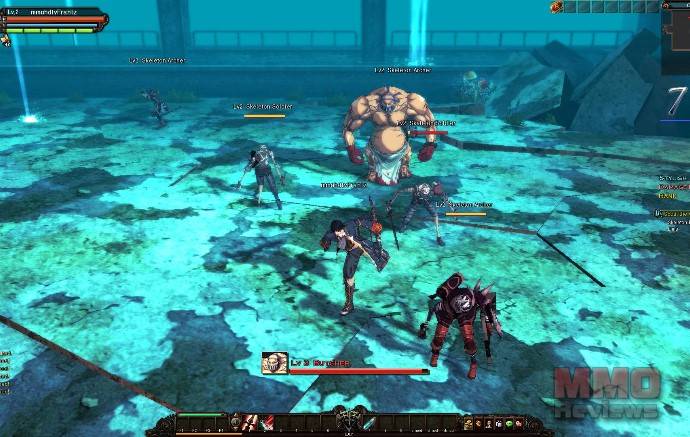 Rusty Hearts is a Hack and Slash free to play MMORPG with anime graphics and beat-em-up combat action, where players can party up for explore dungeons through instanced stages.

-Frantz-
A gloomy man from the start, Frantz Kruger's life took a turn for the worse when he was bitten by a vampire. Unable to resist the temptation, he bit just one person. Instead of letting the blood complete his transformation, Frantz used the blood and the force of his own will to halt the process. He now exists as a creature trapped in limbo between human and monstrosity. As a side-effect of his condition, he suffers from chronic anemia and insomnia, giving him and ashen appearance and a sullen, sarcastic disposition.

In battle, he supplements his swordsmanship with dark magic granted by his vampiric blood. Also, Frantz has trained with massive axes that split his monstrous opponents in two with single strokes. He also employs some rather unorthodox techniques in which he throws the colossal weapon toward his foes like other men would throw darts.

-Angela-
Angela is foul-mouthed and tough, but a bit naïve, having been raised in a small village in the forest her entire life. Still, no one can match her powerful spells. She is a young witch apprentice who to gain the power needs to survive the coming conflict. Angela fused her soul with that of Graestra, an ancient blade possessed by an evil spirit. This turned her hair red and spiky, as well as granting her the sorceress abilities of a witch many times her age.

She can summon fire and orbs of arcane energy to blast all who stand in her way. As Angela grows in power, she can master all the elements, heal her allies and even learn some abilities Vlad's own minions use against her. If Angela will allow it, the spirit's bloodlust will manifest in the weapon of death itself, a large and wicked scythe. Slower even than the Magic Sword form, Graestra's scythe form trades magical superiority for long range, brutal attacks.

-Tude-
A lifelong wanderer, Tude Macleod was attacked by a wolf in his travels. He managed to fend the beast off but not after it broke off one of its huge teeth inside his chest. Before long, Tude discovered that the wolf's bite and its tooth were having an effect on his body. His arm turned into a wicked claw that he keeps hidden within a bulky gauntlet. He was traveling from town to town to avoid arousing suspicion when he stumbled into Bramunez on a whim. In a serious case of wrong place at the wrong time, Tude was sealed within Curtis Castle when the Golden Seal team erected the barriers to trap Vlad inside.

Tude's gauntlet is the fastest weapon on the Golden Seal team, able to uppercut enemies into the air and kill them twice before they hit the ground. In combat, he is the perfect combination of man and beast; ducking and weaving like a boxer before pouncing like a ravenous wolf. His claw sacrifices the quick and precise strikes of the gauntlet in favor of wide, reaping arcs of razor-edged death. Although slower and much bulkier than the gauntlet, the claw has the ability to charge up even its most basic attack in order to unleash a frenzy of strikes.

-Edgar Grosvenor-
Having been the victim of a curse that gave him a permanent body of a child, Edgar went to Bramunez seeking a cure for his affliction. Edgar sought in vain for a solution to his accursed body for years. Throughout his travels he honed his skills with a scyte and a sword using a number of exclusive powers of Angela. Although the capabilities are similar to Edgar Angela, his speed and agility make it unique.

Do not be fooled by appearances, this prepubescent boy is older and more clever than we imagine. Edgar is a fearless fighter who harasses his opponents with relentless attacks on the speed of light.

Nestled within the cold and rocky foothills of the Carpathian Mountains, the nation of Rumania has endured much hardship. In the 14th century, the Black Death devastated all of Europe and this tiny but prosperous nation was no exception. Seeking protection from the plague, the country's royal family sealed themselves within Curtis Castle, but their efforts were in vain. The disease followed them into the halls of their ancestral home and every member of the royal family succumbed to the sickness.

A council of surviving nobles took the reins of government and the country recovered. 300 years after the plague devastated their lands and left them without a king, the nation of Rumania has become a leader in industrial and technological advancement. Its capital, Bramunez, attracts brilliant scientists and skilled craftsmen from across the continent. All the while, the abandoned Curtis Castle looms over the prospering city as a ominous reminder of the bloody past. Any nobles brave or foolish enough to try to claim the sprawling stone complex for themselves ended up dead or mad within in a year, so the castle remained empty.

Or so the citizens thought. An ancient order dedicated to the eradication of supernatural threats to humanity, known as the Hermetic Association of the Golden Seal, has tracked their number one target, the ancient vampire lord named Vlad, to Curtis Castle in Bramunez. Acting quickly, the Golden Seal team placed a powerful barrier upon the castle, sealing Vlad and his minions within. Now they plan their assault on Curtis Castle, to defeat Vlad once and for all.

Just as the operation begins, a group of strangers have arrived in to the chaotic city of Bramunez. Calling themselves "Specialists", they posses strange and powerful abilities that the Golden Seal team would be foolish to ignore. The strangers are encouraged to join the siege on the castle, but their goals and their pasts remain mysteries; even to each other...

There are different modes. Champions climb the PvP ranks and are awarded special points which they can use to purchase special weapons and items.

Deathmatch
The most straightforward mode pits teams against each other in a no-holds-barred brawl. Points are tallied as each member of a team is defeated, but no one stays down for long and it's anyone's game until the timer hits zero.

Tag Team
Solo combat with a team-based twist, Tag Team mode pits your team against the opponent in a series of short, one on one matches. Defeat the entire team's roster to achieve victory but be careful, the order of opponents is random.

Survival
Survival is the only thing that matters at the end of the day. This mode reflects the brutality of the world itself. Either in a team or by yourself, survive by any means necessary and be crowned the victor of this savage match.

The My Room feature gives you a personal space within the city to store items and collect your thoughts. It also serves as a fast-travel hub so you can reach all the areas you've already discovered quickly and conveniently. Every time you enter the land of Rumania you will start in your Room. Where you go from there is up to you.

Members of a guild can enter their own private Guild Hall to chat, trade and form guild groups. They can also make donations in the form of money or goods added to the Guild Warehouse or experience that contributes to the Guild Level.

Guild Experience is acquired by all characters within a guild and doesn't affect the amount of experience you receive toward your level. It is a separate system that rewards guilds with many active members, allowing them to contribute toward leveling up their guild. As guilds increase in level, they gain benefits such as an increase in total members allowed in the guild.