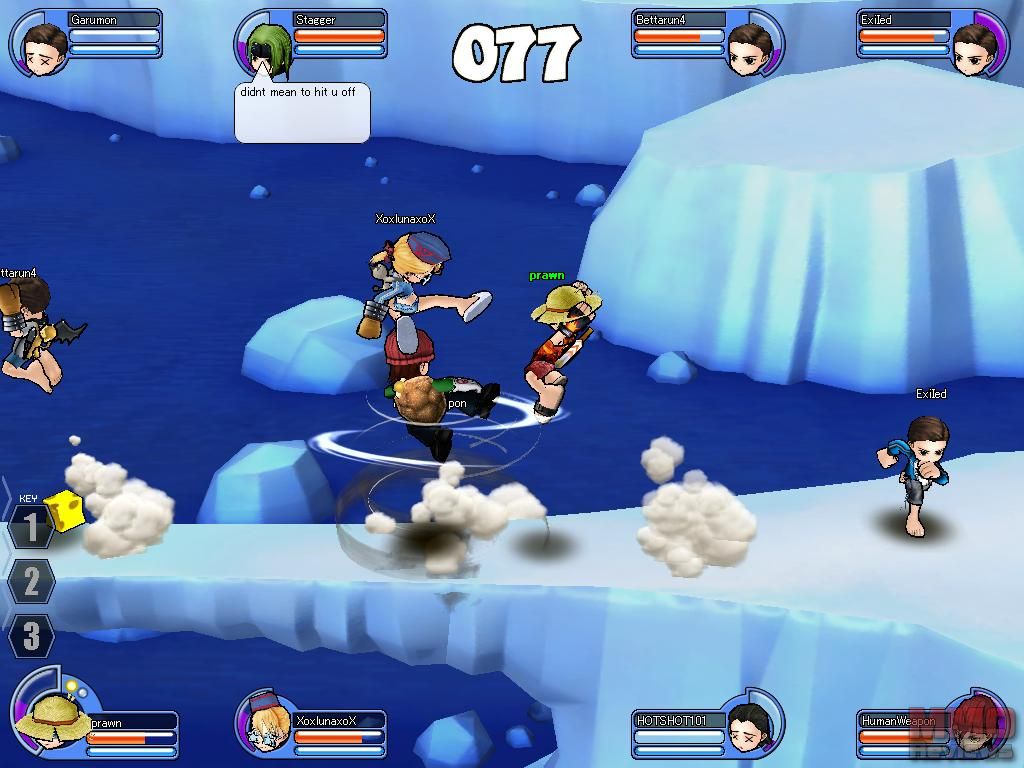 Rumble Fighter is a free to play action game which  allows a maximum of eight players to battle it out in simultaneous multiplayer action. Basic offensive attacks include hitting, throwing and blocking with advanced attacks such as combo attacks and counterattacks. User friendly controls enable the player to test out many different attacks. It can also be played using separate game controllers for a more arcadelike feel.

Unique skill systems
Rumble Fighter has a very unique skills system using ExoCore (Transformation items) and Sacred Scroll (Movement transformation items). ExoCore is an item allowing players to transform and morph their characters (Overdrive Mode) to a stronger fighter. Players can hold a maximum of 2 ExoCores at once. Players can take advantage of 2 special skills each ExoCores possess. The Sacred Scroll is an item allowing players to transform the character's action by giving the special martial arts power each martial Arts Scroll possesses.

Variety of Game style
Rumble FIghter is roughly divided into two modes: Battle mode and rumble mode. Games can be played either in Team Play or Individual Play. Battle mode was designed to suit players who like to play a more survival style of game, and is restricted to that survival style. Rumble mode has no such restrictions, and allows players to select from a variety of game styles.

A long time ago, an evil spirit known as the Shadow King planned to conquer the world and consume everyone in it. Many fighters fought hard in trying to defeat the evil king, but unfortunately some could not overcome the evil and became consumed by his power. These consumed fighters were known as the Dark Guardians. The Shadow King was defeated when fighters captured his evil spirit with the Sacred Seals and placed it underground in a location known as "Resurrection". After the defeat of the Shadow King, the Dark Guardians disappeared into the darkness as they waited for the perfect opportunity to strike again.

Currently there is a huge war of good versus evil in the fight for the Sacred Seals. With the Seals weakening each day, the hopes of victory for the Guardians are starting to slip away. In preparation for the very worst, a Rumble Fighter Tournament is being held to recruit the best fighters from around the land to aid in the great war.

Striker
The basic martial arts specialist. Strikers are strong in physical strength and close combat. This balance makes them ideal for beginners.

Soul Fighter
Soul Fighters are aptly named because they have the ability to call upon other living souls for power. Strong in speed and jump, but weak in defense, their winning strategy is to hit-and-run, making them better for experience users.

Alchemist
Skilled in the arts of elemental transmutation, Alchemists have gear which offer great defense, but with speed being their obvious drawback. Their winning strategy always involves defense first, then strong attacks with their special skills second.

Shaman
Shamans have a deep connection with souls and spirits, giving them the ability to control nature. They have well-balanced strength, defense and speed.

Many items in the game have gem slots that allow for players to upgrade their items. There are 5 types of enchants, the Tanzanite of Mana, Zircon of Health, Topaz of Jump, Sapphire of Speed, Obsidian of Defense, and Ruby of power. The Mana gem provides +12 SP, the Zircon gives +40 HP, and the stat gems all provide a +1 bonus to their corresponding stats.

In turn, each gem can be enchanted to multiply its effectiveness by using a particular Enchant Card. Enchant Cards will give you a chance to upgrading. As an example, a +5 version gem will provide 5 times the original non enchanted gem stats.

All of these functions are done in the Accessory tab, "Sockets" place gems into clothing items, and "Enchant" is where you go to upgrade the gems.

Rumble Fighter consists of 5 main channels: Beginner, Amateur, Semi-Pro, Professional, and Open. Each channel is classified for different levels of skill.  There is also a Tournament channel for special events.

Beginner channel
This is the channel which all new players start in.  Once you’ve proven yourself to be strong enough, you will move up a channel. Also once a player completes the tutorial, they will be given some items and costumes for use. Players may also receive cash item gifts from other players.

Amateur channel
The next step up from Beginner, this channel welcomes all players to Rumble Mode fights, such as Caged Beast, Moving Screen, and more!

Semi-Pro channel
After continuing to prove yourself, you will be moved up to Semi-Pro.  Beware of the level of competitiveness starting to grow and higher level players will be at every turn.

Professional channel
The upper tier of the Rumble Fighter tournament, this channel is for only the best players in the game.  You have truly proven yourself worthy to enter this channel and join in the epic battles.

Open channel (Any level)
Any player can enter this channel at any time, showcasing everything that Rumble Fighter has to offer. If you’re looking for the broadest range of competition outside of your channel, this is the place to be.  Note that once you’ve reached Level 20, try beating Survival Mode 3 times and you will be rewarded with a special skill known as the Nan-Mu.