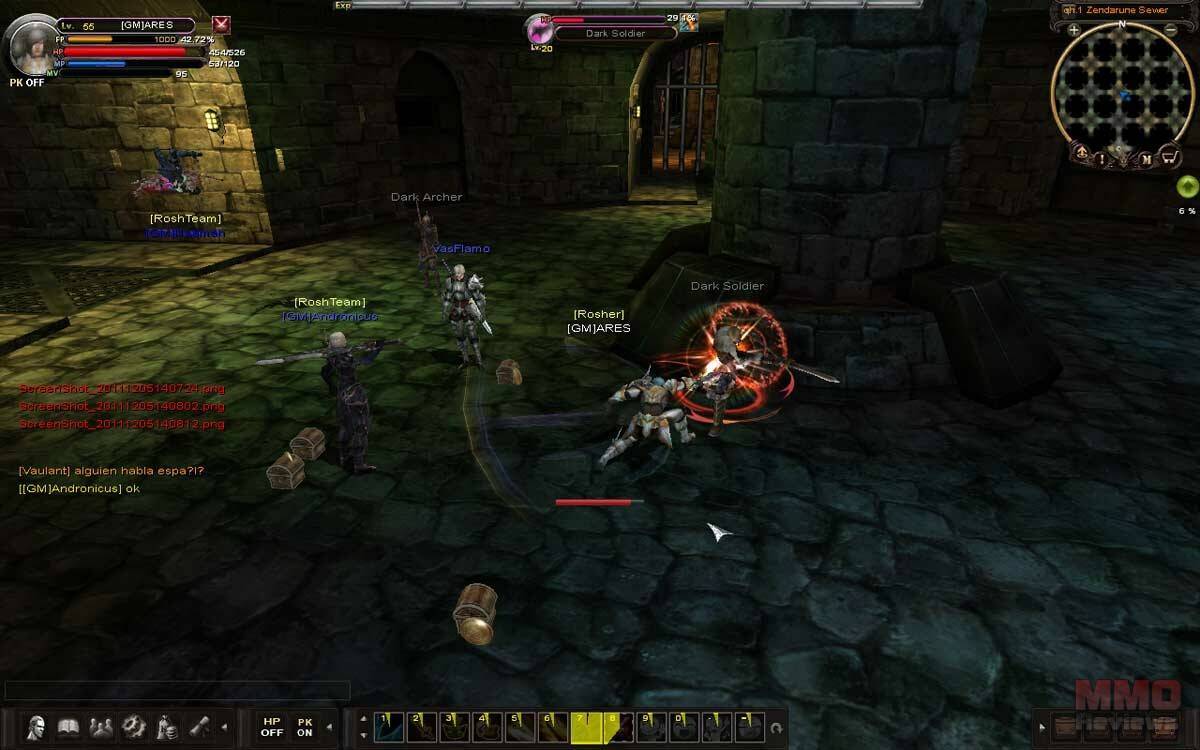 Rosh Online: The Return of Karos

Rosh Online: The Return of Karos is an action MMORPG set in the fantasy world of Asmara in which players take on the role of a hero determined to break the curse of darkness and ascend to ultimate glory by becoming the mythical Karos warrior.

Through Quests, Guild clashes and large-scale PvP action you’ll fight to dominate the vital energy source, Fletta. In addition to a traditional EXP-based levelling within the game, Rosh online also features a unique and complex alternative progression system: Fletta energy can be used to increase stats, give buffs, buy resources and enchant items.

There was a time, when the 4 existing races on the Broccion Continent freely developed their civilization in different parts of the land using the power of magic and expanding until they met each other in the centre of the continent. For the differences in their appearance, culture and magic, they feared one another which finally led to an ongoing war.

New generations with access to all 4 cultures were born during this war. Unable to understand the meaning of it anymore, they were determined to stop the bloodshed. The leaders of the group were called Rosh. The centre of the continent was unified, the Kingdom of Asmara established governed by a king selected by the Rosh Council.

100 years went by; the Ismaul clan eventually had a king selected from its rows. Abusing their power and eliminating members of its rival clans, they abolished the council in order to declare themselves as the only royal clan. Asmara once again was thrown into war and chaos, waiting for a new Rosh to bring peace again…

Rosh Online features the revolutionary Fletta system. Fletta is an energy form which can be absorbed by killing monsters and is accumulated as Fletta Points (FP). The later can be used in many different ways:

Crafting & empowering weapons & armor - Fletta Gem Equipment automatically adjusts and upgrades itself. Those special items have a better appearance and bonus stats in comparison to normal weapons and armour and don’t require a minimum level to use them.

Learning & Developing Fletta attributes - Picking unique Fletta attributes, you will make your character stand apart from all the others. Choose one of the 2 sets of attributes to develop in order to make your attacks deadlier, your spells more devastating or your ranged attacks incredibly fast.

Blessing - The Blessing of Fletta represents a special buff providing players with a certain bonus percentage (increasing with the collection of FP up to a maximum of 6%) to any experience gained.

In Rosh Online, there are 7 playable classes which provide the possibility to advance into different directions via several subclasses:

Mythic - Magicians who deal great damage by drawing power from nature using their mental strength. Mythics can either advance to a Mage who focuses on neutralizing threats from a distance or a healing Cleric.

Bowmistress - These beautiful women are experts at rapidly dealing damage from any range. Luring and dispersing enemies from afar, they prevent them from performing any tactical manoeuvres. Bowmistresses can advance to Archers able to interrupt spell casting from a distance or Rangers who learn to shoot even further and fend off close ranged attacks.

Paladin - Paladins are holy female warriors armed with sword and shield, able to enhance their allies’ combat skills and heal them through praying. These moving tanks of defence and endurance can advance to a Defender increasing her own power or become a Holy Knight supporting allies in battle via divine auras.

Rogue - Wielding a weapon in each hand, the Rogue is a flamboyant warrior with deadly moves. They evade incoming attacks in order to counter them with a single but fatal strike. Rogues can advance to an Assassin in order to expand their repertoire of mortal blows or choose the Duellist focusing on evasion and charms.

Gunner - They’re specialized in gunpowder-powered weapons such as rifles and artilleries and possess unique crafting skills. Gunners can advance to a Sharpshooter specialized in ranged attacks with a rifle or become a Creator focusing on crafting and installing combat-oriented devices.

Sorceress - Female shadow magicians casting spells that cause slow and painful deaths. Weakening their opponents by strategically using curses, they make them an easy target for heavy damage. Sorceresses can advance to a Banshee whose specialty lies in weakening enemies via curses or become a Spellbinder specializing in dealing damage to opponents over time.

In Rosh Online, players from level 10 and above can create a guild after paying a fee of 50.000 carats. Guilds can engage in guild warfare, battle for the control over mines producing valuable minerals, participate in castle sieges and form alliances with other guilds (only one at a time). There’s also an alliance chat provided.

In order to travel the vast world of Rosh Online, there are various methods at your disposal:

Holy Creature - Functioning as a shoulder armour piece or a mount providing excellent mobility when summoned, this item can be obtained by crafting, completing certain quests or buying it from the Holy Creature Manager NPC.

Remember Stone - A Remember Stone can be accessed near the main entrance of each town, providing the player with the possibility to easily return to this location.

Mortuary Tablet - Having this item equipped, players are able to resurrect immediately in the spot where they have died.