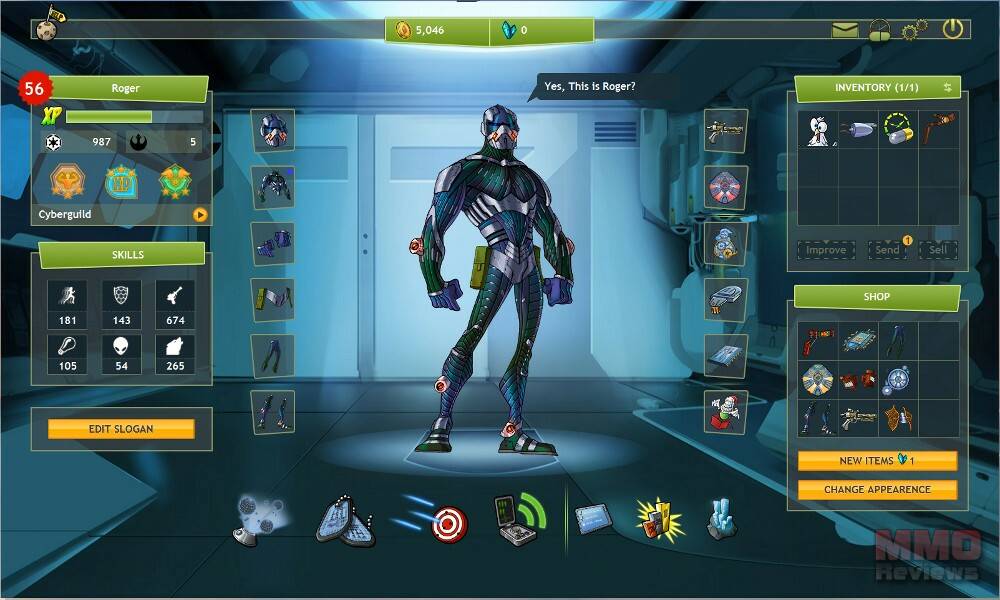 Roger & Out is a free-to-play browser-based strategy RPG game developed by Travian Games. With its humorous approach and various references to famous films and TV series, this progress-bar game is a Sci-Fi parody providing an accessible and very entertaining gaming experience.
Become a space conqueror, create your own unique sci-fi heroes and customize them with all kinds of different items. Join guilds to play against other alliances for ascendancy.

Space - the final frontier. These are the adventures of a young mercenary who battles the forces of darkness in a galaxy far, far away or with the forces of light, alone or with other mercenaries – in their own guild starship!

Roger & Out are two robots. Besides leading new players through the game’s slick tutorial, they have one single mission: to battle boredom and exercise your laughing muscles. Things really get going as soon as the newbies are unleashed into the galaxy…

In Roger & Out, players will create and develop a no-name mercenary into a galactic superhero. They accept different quests, duel with NPCs or other players, collect valuable booty and experience points allowing their hero to level up and increase characteristics such as logic or empathy. Players are drawn ever deeper into the game, unlocking more areas of the galaxy as they increase in level.

The upgrade and collection options in Roger & Out are quite unlimited. Powerful pieces of equipment consist of several components that affect the properties of the equipment. Item names indicate the nature of the player’s equipment ranging from an “Anarchist’s Shabby Waistcoat” and a “Low-energy Zapgun” to the “Fantastic Rebel Jacket of Ultimate Defence” and the mighty “UberGun”.

The game also allows players to found guilds and explore the galaxy together. Members can then crew their own guild starship; and the higher the guild level, the more crew spaces will be available on the ship. The guild should aim at manning every position with the ideal character. Every time the guild levels up, the ship can be expanded, unlocking even more missions that can be played cooperatively with the crew, providing even more bonuses for all guild members.