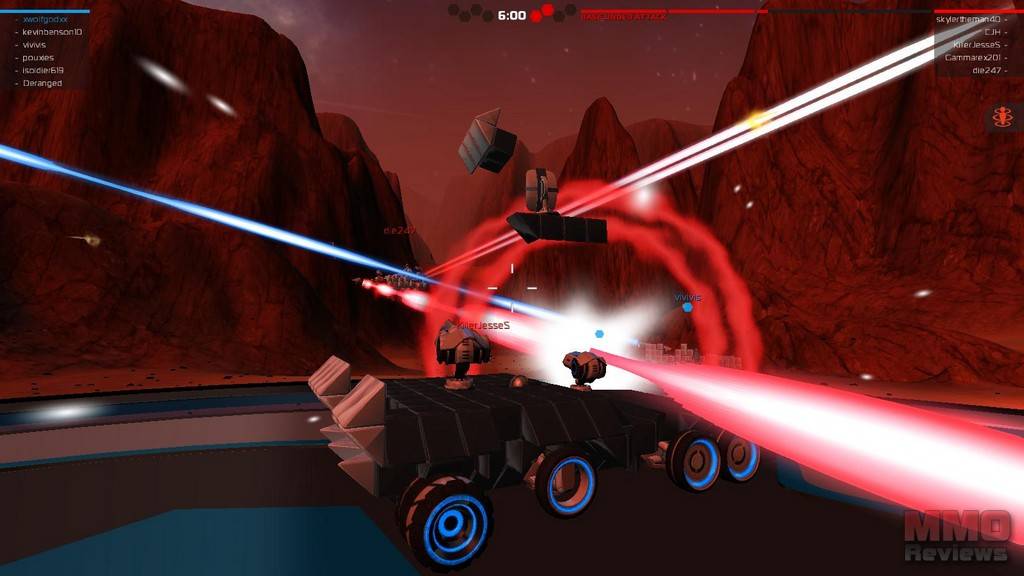 Robocraft is a multi-platform free to play vehicle shooter allows players the freedom to design, construct and battle with their own robot machines across various game modes and maps in team focused matches.

The core of the game focuses on players being able to design and build powerful fighting robot machines, from the ingenious to the weird and wonderful, with a handful of rules and restrictions players can otherwise create any crazy robot they can think of and then fight with them in team orientated matches in either ranked or unranked play. Fighting across numerous terrain types players can make robots for all situations, including those that can turn invisible, focus on long range combat, and even fly.

Over time players acquire new blocks and the ability to construct even larger and more powerful robots for their battles, which gives more choice and variation in the machines design. Constructed in a personal garage space players can build up the shape and design of their robot from hundreds of smaller blocks, known as “cubes”, that come in in all sizes and shapes, attach weapons, components, armor and more. The five main cube types are:

Chassis – These cubes are primarily to build the shape and structure of the robot, whether a huge monolithic structure with lots of block to cover its internal components, or a small and agile machine that can quickly make its way around the map

Movement – These are used to give the robot the ability to get around maps, players can use everything from standard wheels, caterpillar tracks, legs, hoverblades, skis and even propellers and thrusters to give them the ability to fly

Hardware – Essentially your electro armor components and your weapons, with a huge selection players will be able to blow blocks off the enemy in battle, including destroy their weapons, players can equip rail cannons, lasers, missile launchers and more

Special Cubes – Typically non-essential elements they range from radars and jammers to show (or hide) players on the map, shield Discs, Blink systems to teleport and even Ghost stealth components that can all help a robot in different ways and change its playstyle

There are two main restrictions when creating a robot; CPU and Robot Ranking:

CPU – This determines the number of cubes a player can use in their design, by levelling up their account they will increase this number and subsequently be able to build larger, better equipped and more complex robot designs

Robot Ranking – Every “cube” has a Robot Ranking value which generally signifies its power, when the creation is complete the game will add up all the Robot Ranking scores of each cube used in the design and give a final score; this score determines the robots’ tier so that similarly matched/powerful robots are put against each other in combat

There is a variety of game modes fought across three different planets (Mars, Earth and GJ1214b “Gliese”) with different terrains; the main match style is team based combat with objective focused matches. Players can play in ranked “League Arena” trying to capture towers then destroy their opponents’ reactor (with MOBA style elements), this is the main ranked mode but can also be played in an unranked “Battle Arena”. Other games such as The Pit deathmatch, Team Deathmatch, Elimination (10 vs 10 with one life each) and more.

In the game players have all types of weapons to try and eliminate each other, disabling enemies by destroying movement cubes, or making them less useful by targeting their weapons, but ultimately players are trying to destroy the pilots chair; in doing so the robot is destroyed. During battle there are various means for robots to heal/repair and missing components can be reattached to allow a robot to keep fighting.