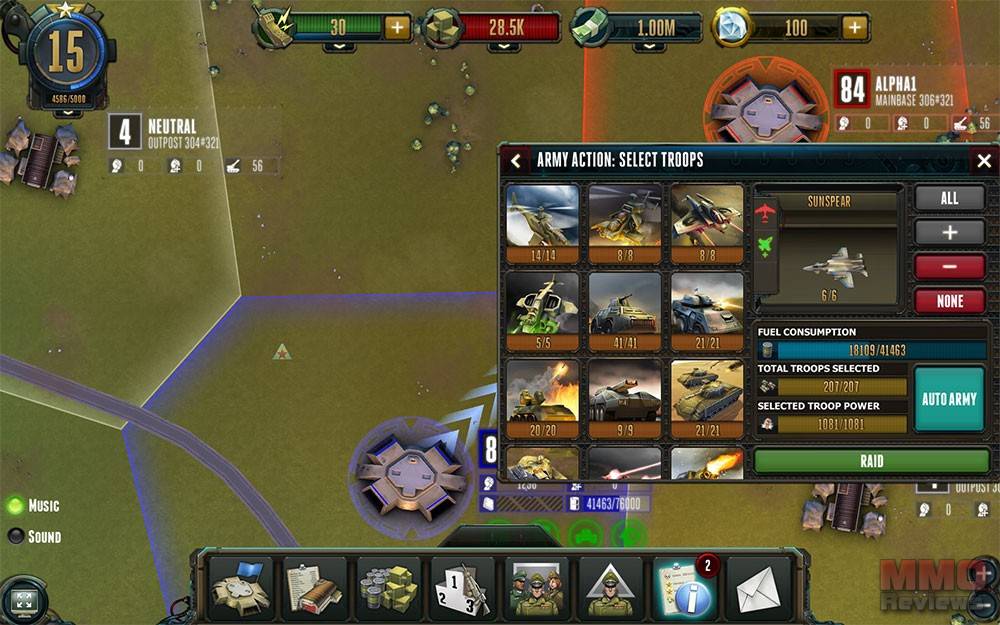 In Rising Generals, players step into the shoes of a lieutenant in charge of their own army, the world has fallen into chaos and now it is every man for themselves and all that matters is try to carve out your own territory in this endless war zone. In the game, players must manage their resources, train up an army and expand ever outwards with the ultimate goal of dominating their island. Rising Generals is completely free to play and can be accessed via web browsers and also offers complete iOS and Android mobile device compatibility, built from the ground up with this intention.

The core of the game is an Empire building strategy MMO that requires players to gather up resources, train their own army, learn new technologies to advance and upgrade and ultimately waged war on other players in a land grab for neutral territory. One of the core principles of the game that separates it from other MMOs of this genre is the "immediacy" that allows players to see instant results from their actions.

In terms of gameplay what this means is that should a player wish to create a unit where in previous games they would have to start training and then wait a number of minutes or hours for completion before they could use it instead in Rising Generals players receive those units instantly. Players will be able to choose how many units they wish to create from a set list (eg. for armored cars you can create 1, 2, 4, 7, 10 or 20 in one go, or for fuel you can create 350, 700, 1400, 2450, 3500 or 7000), each of which has a resource cost that scales equally and so is able to provide for the players immediate needs. However, once one of these options has been chosen to build option goes on a cool down timer, which determines how long a player has to wait before they can use that feature again on that base/outpost. The cooldown’s length of time is calculated by how many units/fuel you wish to create in a single action (4sec, 30sec, 2mins, 5mins, 10mins and 30mins respectively).

Every player starts with their own base, the main headquarters where they can build up units, create fuel which is required for performing various actions such as attacking enemy outposts and bases, learning new technologies to unlock improved military units and even an area to watch your army’s finances to ensure you can afford to create more units.

Surrounding the players main base is a piece of territory outlined in blue that belongs to their Empire, surrounding it are other pieces of territory that will either be grey neutral territories that typically have an outpost in them or a red territory that is controlled by a player (either their base or an outposts that is currently under their control).

Using the seamless zooming, players can gain a wider overview of their territory and the surrounding enemy and neutral territory, which collectively make up a district, zooming out wider shows that these districts are clustered together in a larger "region". Battles between regions are likely to be the main endgame feature for Rising Generals where players band together to form alliances and slowly try to take over all the regions and control the entire island map.

Players are able to attack any outpost territory and capturing it for themselves, bringing it into their own Empire. However, the player's own main base can never be taken over by another player, so they cannot be completely knocked out of the game. Players are able to raid each other’s bases and harass them to dwindle their resources and forces, even to the point of surrounding them and no longer making them a credible threat. In such circumstances, the helpless player is able to abandon their base, take their resources and the rest of their army and rebates themselves elsewhere on the island.