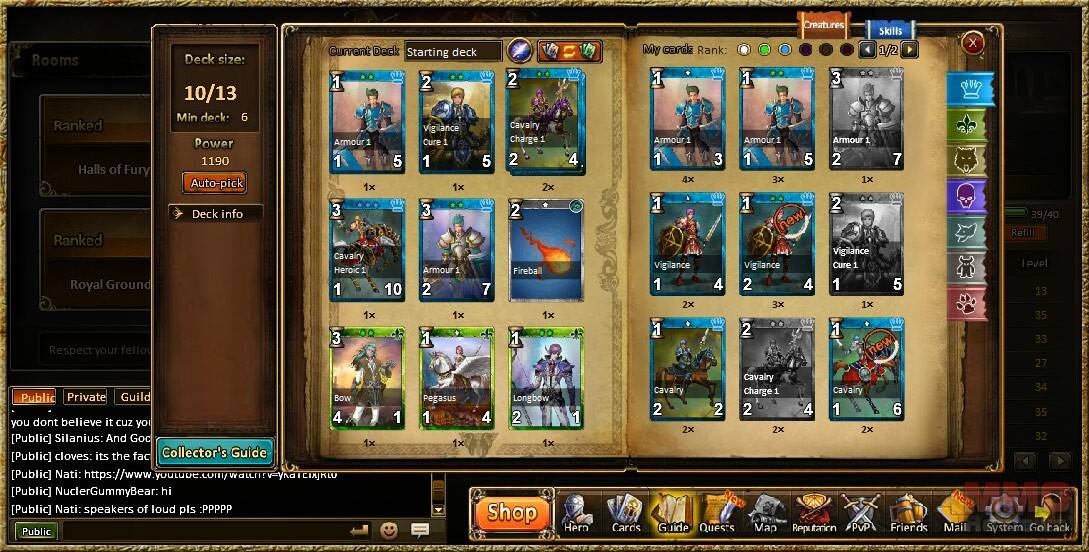 Rise of Mythos previously known as Kings and Legends Global is a competitive online collectible trading card game with an MMO twist. In an exciting PvE campaign, players will have to protect the city of Silver Heron Ridge from encroaching evil forces while being able to take on powerful AI opponents with other players in the Challenge Hall and to fight their way to the top of the Ascension Tower for powerful rewards. They may also show off their deck building skills and claim victory over their fellow players in the Arena.

Rise of Mythos offers four classes to choose from, each with its own set of unique skill cards they can use in battle. In order to switch between classes at any time, players will need a class selection crystal which can be found in-game or purchased from the shop.

Warrior - Warriors draw on their strength to inspire courage in one and all. They can not only use their skills to rally their own creatures, but also to directly inflict damage on enemy creatures.

Ranger - Gifted with exceptionally keen senses, the Ranger’s ability to control the battlefield is tremendous, and the tactics they use to weaken the enemy are a power matched only by the deadly poisons they will use in battle.

Mage - Mages are constantly researching magical energies to increase the damage they can inflict in battle, and can even take control of enemy troops.

Priest - Devout believers in divine forces, Priests command powerful healing and defensive spells to assist their creatures on the battlefield. They also summon the wrath of gods to smite their enemies.

Player can build their deck using any number of creature and skill cards. New cards can be earned by completing quests and various challenges in the game, or purchased as booster packs or individual cards in the shop and/or the auction house. As they collect more cards belonging to each faction, players will earn rewards based on the percentage of each faction or class’ cards they already own. Collecting all the cards in a set will grant them increasingly powerful rewards.

While skill cards will add a special effect to the player’s deck, creature cards are more complex and characterised by different attack and damage types, amount of lives and special abilities. Moreover, creatures belong to one of these factions:

Humans - A sure and steady people, the humans’ infantry is ever vigilant and heavily armoured, helping to keep them in the fight longer. While their Templars and Paladins can heal damaged units, their Calvary is swift and fearsome, and their Mercenaries are well rounded combatants.

Elves - With their deep connection to magic and nature, elves have the best archers in the world and their priestesses are powerful Clerics and Mages who command the power of the gods, to wield powerful elemental magic. Their Cavalry rides into battle on winged pegasi, soaring over the enemy front lines.

Halfbloods - Part man and part animal, the Halfbloods are comprised of a variety of races. Feles make excellent scouts and assassins, Centaurs thunder into battle with bow and lance while the fierce Tengu fly overhead and attack enemies from behind.

Undead - These fearsome creatures are a nightmare to behold on the battlefield. Zombies advance the front lines, and may revive immediately upon defeat. Horrifying vampires will steal the life force of their enemies to heal themselves while ghosts attack from a distance dealing shadow damage, demoralizing enemy troops and may return to their commander’s hand to be summoned again once defeated.

Goblins - The Goblin Horde steadily advances across the field of battle. They show little fear and excel in the use of poisons and counter attacks.

Ogres - The rage of the monstrous Ogres is terrifying to behold. They can regenerate life once wounds have been inflicted, stun enemy troops with massive boulders they use as weapons, and have been known to become even more powerful when angered.

Beasts - Magical beasts can be truly frightening. Swift and deadly hounds stalk their prey relentlessly, and Hell Hounds breathe fire at their enemies. Powerful armoured thunder lizards may move slowly, but their lightning breath can stun opposing forces, while deadly disease ridden bats can infect enemy troops before moving to their next victim.

In Rise of Mythos, battles take place on a grid with up to four lanes, each one comprised of 12 squares across. One player’s or team’s characters are placed on one side of the grid, the opponents will be on the opposite side. The goal is to have your forces reach the opposite side of the battlefield and reduce your opponents’ life to zero before they can do the same to you.

Players are allowed bring a maximum of 30 cards when entering one of the following battle types:

PvE campaign - The PvE campaign takes players through a series of thrilling, story-based battles with special rewards for defeating each challenge.

Challenge Hall - In this mode, players can team up against powerful enemies in four player cooperative boss battles. These battles range in difficulty from relatively easy to incredibly difficult.

Ascension Tower - The ultimate test of players’ deck building skills, the Ascension Tower offers fifty levels of increasingly difficult challenges. When advancing through the different levels, you will receive tower coins which can be spend on powerful cards and other equipment.

Arena - In the arena, players can duel each other, team up with a friend for 2v2 competition, or prove their guild’s dominance in 4v4 combat. All of these modes offer ranked and practice play with special PvP rewards and cards which can be earned by competing in PvP.

THE CITY OF SILVER HERON RIDGE

As lord protector of Silver Heron Ridge, players will make use of many of the amenities the city offers and help plot out future upgrades to the infrastructure to keep themselves and their armies in battle-ready condition.

Apart from combat locations such as the arena, the Challenge Hall and the Ascension Tower, the following buildings are available:

City Hall - The City Hall is main building in town and the centre of activity in Silver Heron Ridge. Through the building, players can construct and upgrade the other ones. The City Hall moreover allows collecting a daily income of silver and crystals, and for a small fee of gold, players can levy taxes for a little extra income each day.

Guild Hall - Players who are not currently in a guild may join or create a guild here. After joining, players can donate to increase their guilds wealth and experience as well as their personal contribution to the guild. The guild leader is able to spend the guild’s wealth to provide bonuses to its members such as decreased construction costs in the city and increased bonuses for completing activities with other guild members.

Seaport - The Seaport is one of the most important buildings in Silver Heron Ridge, which can be used to send out troops on expeditions while being offline in order to gain the rewards of their hard work upon returning. Rewards range from earning higher levels of experience to crystals.

Blacksmith - Players can visit the Blacksmith to enchant their character’s equipment or combine it to increasingly powerful equipment.

Auction House - At the Auction House, players can buy cards from or sell them to other players.