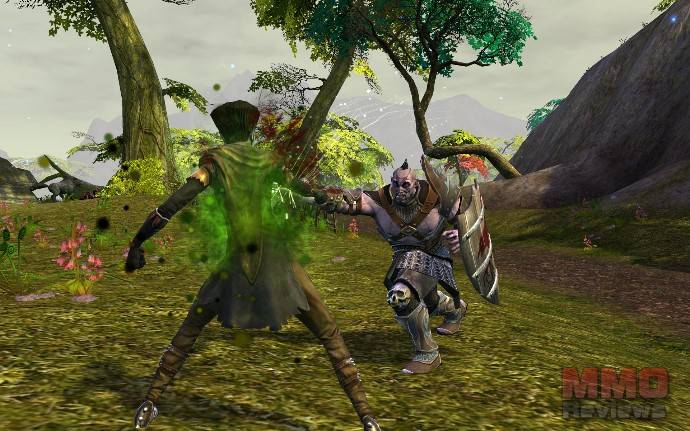 Developed by Trion Worlds for Windows.

Rift: Planes of Telara is a fantasy massively multiplayer online role-playing game (MMORPG), where thousands of players adventure together to save a world being torn apart by magical rifts that unleash deadly planar invasions. Rift: Planes of Telara will be available both as a digital download and as a boxed product in your local video-game retail store. And it is scheduled to be available in English, French, and German.

Telara is one of many worlds in the known universe, but unlike the others it rests at the intersection of several powerful planes of reality, the very forces that make up all existence. The planes form a nexus of energy around Telara, and it is this unrivaled power that first attracted the mighty elemental gods of the Blood Storm.

Led by Regulos, god of Death, the Blood Storm devoured countless worlds in its unending hunger for conquest. But when these baleful gods moved toward Telara, the Blood Storm turned upon itself; each sought not to destroy Telara, but to rule it. The vicious infighting that resulted allowed the people of Telara, and their native gods, to strike back, imprisoning the elemental deities one by one. United, the Telarans expelled even the powerful Regulos, destroying his physical form and then banishing his spirit.
Helped by their gods, the mages of Telara fashioned the Ward, a magical barrier around the world. The Ward would protect Telara from the planes, keeping the peace by imprisoning the captured Blood Storm and preventing the return of Regulos.

For eons, the Ward held. And then, abruptly, it was breached. Aedraxis, a king whose rivalry with his brother led to the Mathosian Civil War, somehow made it possible for Regulos’ power to slip through again into Telara. The Ward was fractured, and a devastating magical disaster known as the Shade swept across the land, destroying or maiming whatever it touched. In the eighty years since, massive rifts have begun to appear where the planes intersect, tearing through the Ward and bringing the chaos of these outer dimensions to Telara.

By studying the rifts, Telaran scholars have so far identified six planes that interact with Telara through cracks in the Ward, each representing a primal element of the universe: Life, Death, Fire, Water, Air, and Earth. There are many theories about the true nature of these discoveries, and there is much yet to be learned. But one thing is generally agreed: The elemental planes are in danger of destroying the world of Telara and must be stopped at all costs.

Every player experiences a different adventure in the living, breathing world of Telara. Rift: Planes of Telara™ has all of the traditional quests and deep story arcs you expect from a fantasy MMO role-playing game, but there is unpredictability to life in Telara that guarantees even familiar terrain can offer new dangers and opportunities.

Whether it’s a previously peaceful farm being ravaged by demons, a tranquil forest glen suddenly ripped apart by a violent rift, or merely an unassuming traveling merchant with astounding wares, spontaneous events are taking place all across Telara for you to discover and take part in.

The ebb and flow of activity in Telara is always changing. Thousands of unexpected encounters are occurring at any moment, making every adventure unique — with more being added all the time. And just like in real life, you can revisit favorite haunts to see what's different, adding a novel sense of exploration to even well-trodden ground.

Mysterious rifts are tearing the world of Telara apart. A powerful magic explosion during the final days of the Shade War has left the veil between Telara and other planar dimensions fractured and torn. Treacherous and powerful, these rifts occur when another plane of reality intersects with the magical Ward protecting Telara. Rifts create doorways for planar invasion, destroying the lands and people of Telara, but they may also grant otherworldly power to those brave enough to seize it.

Now no part of Telara is truly safe. Invasions can occur anywhere and at any time, and the danger to the world is growing. Two major factions have emerged to save the world of Telara from the rifts: the Guardian and the Defiant. Each faction works in different ways to preserve Telara's future, and both seek to undermine the other.

While little is known about the exact nature of the rifts, Telaran scholars, priests, and historians strive to unlock the mysteries of these massive portals. It is believed that the rifts are being caused by direct attacks on the magical Ward surrounding Telara. Regulos, the dragon god of extinction, seeks to free his imprisoned minions of the Blood Storm trapped deep inside Telara. These attacks weaken the veil and cause planar disruptions that open the destructive rifts across the world.

Often, rifts appear in the world as a tear in the fabric of reality.  Powerful magic has been used to study these anomalies, and sometimes they have been opened inadvertently, resulting in great tragedy. But there is still much to learn from these destructive forces. Can riftic power be harnessed by sorcery? Can powerful beings enter the rifts to venture into the deadly planes beyond? How many planes really exist?


Rift: Planes of Telara provides many playable races to choose from. Each race has its own characteristic look, unique racial ability, and distinctive background story. Races also belong to one of two opposing factions, either Guardian or Defiant. Each race will offer players its own set of advantages and disadvantages during gameplay.

Bahmi
The Bahmi are the curious and reclusive denizens of the Rhaza'de Canyons. Their elemental ancestors, the Shalastiri, arrived on Telara through a rift from the Plane of Air at the time of the first Blood Storm Wars. Led by their prince, Bahmi, they proved invaluable warriors in the fight against the dragon gods.

High elves
Beautiful, elegant, and extremely cultured, the High Elves trace their roots all the way back to the Age of Legend, when their god Tavril and the other four gods of the Vigil created the world of Telara. The High Elves are one of the oldest and most storied races living on Telara.

Mathosian
Honor, faith, and duty are the most sacred tenets of the strong Mathosian humans who once ruled the rocky highlands of the north. Mathosians value strength, hard work, and a man’s oath above all other things except perhaps loyalty. It is their commitment to these virtues that helped turn Mathosia into one of the greatest empires Telara has ever known, and from the humblest of beginnings. Tragically, it was also the very beliefs that eventually tore them apart.

Dwarves
The Dwarves are a fallen people now. Without a homeland, they wandered for many years, taking shelter with the Mathosians, Elves, and even the Eth, as few towns would turn away a dwarven craftsman looking for a home. When Borrin Gammult returned as an Ascended Guardian, many Dwarves rallied to his banner in Sanctum, vowing to build a new home with the Vigil’s blessing, and to seek redemption for the sins of Hammerknell. Holy Sanctum owes much of its beauty and strength to the efforts of Dwarven heroes, mortal and Ascended, whose genius never faded even as their hope guttered to embers.

Eth
The Eth are a tribe of humans who adapted to the harsh southern deserts by becoming master survivalists and taming their environment through magic. During the Blood Storm Wars, this inquisitive and fiercely scholarly race discovered a means to harness sourcestone as a fuel for eldritch war machines.

Kelari
Thanks to prolonged interactions with spirits, the Kelari are both culturally and physically distinct from their High Elf cousins. The Kelari are a proud race, believing themselves spiritually equal, rather than subservient, to the gods. They have no betters, only those who must prove themselves equals.


There are hundreds of potential class combinations in Rift: Planes of Telara. Once inside the game, you can choose one of many different starting classes during character creation. Later on, you will have the opportunity to change and enhance these classes in unique ways. Rift  will be offering an expansive and unique class system for players.

Warrior
Weapons, tactics, and combat are the mainstays of a Warrior’s life. Both the barbarian raiding a village and the knight commanding a column of troops adhere to the tenets of discipline, personal combat, and martial training. Every Warrior knows how to fight in close quarters, to take a blow and deliver a mortal wound in return. As the elemental forces have closed around Telara, a growing number of Warriors have incorporated magical techniques into their martial styles.

Cleric
Clerics are renowned for their powerful support magic, able to repair the most grievous injuries or cure the deadliest diseases. The spells at a Cleric’s command are as varied as the patron deities they follow. Many Clerics are also capable combatants who rain divine wrath from afar, or wade into the thick of battle, warhammer swinging.

Rogue
Rogues are most at home skulking around the edges of battle, waiting for the perfect moment to strike with overwhelming force and minimal chance of counterstrike. They excel at tasks requiring a quick mind and quicker blade, such as dueling, scouting, and assassination. Not all Rogues live in the shadows. Many are simply loners, at home on the edges of society, mastering the arts of hunting and animal husbandry to survive.

Mage
Devastating long-range combatants, the arcane powers Mages wield can tear through any opponent, regardless of armor. While Mages are renowned as a fearsome offensive force on the field of battle, a number of orders specialize in potent support and healing magic as well.

Guardians
The Guardians represent the sincerest belief that the Vigil, the five gods of Telara, have not abandoned the world, but are working towards an intricate plan for the final battle of good against evil — the Day of Judgment. Members of this faction feel they have a destiny to fulfill as part of a divine plan to save the world.

The Guardians see themselves as the protectors of the people of Telara. They believe it is their sacred responsibility to bring law and order to the defenseless, even if they do not seem to appreciate or want it. Many do tend to be overly judgmental and controlling of the places they rule, but in the end they believe it to be in the people's best interest. And all Guardians believe they serve the greater good by protecting the masses from the rifts, or from themselves.

The Guardians believe that a convergence of all the planes is coming and will destroy the world. It is their holy mission to prevent this catastrophe by restoring the Ward of Telara, and sealing off the planes forever. To this crusade they have sworn themselves — even if it means destroying the reckless Defiant faction before their foolishness ends the world before Regulos does.

Defiant
The Defiant do not care whether the gods abandoned the world or not. To them, this entire planar convergence disaster is the gods' fault in the first place. Indeed, as soon as things went from bad to worse, the gods suddenly and inexplicably disappeared.

So while the Guardians run around Telara building temples, sticking their noses in everyone's business, and desperately praying for a miracle, the Defiant plan on actually delivering one, even if it means being branded as heretics and operating outside the laws of the land.

Above all else, Defiants are rugged individualists who love technology.  Mixing technology with magic offers amazing opportunities for innovation, personal power, and cultural progress. If used correctly, these advancements could also be turned into spectacular weapons to fight the looming darkness. The Defiant absolutely believe that the best defense is a great offense - something the Guardians will never understand.