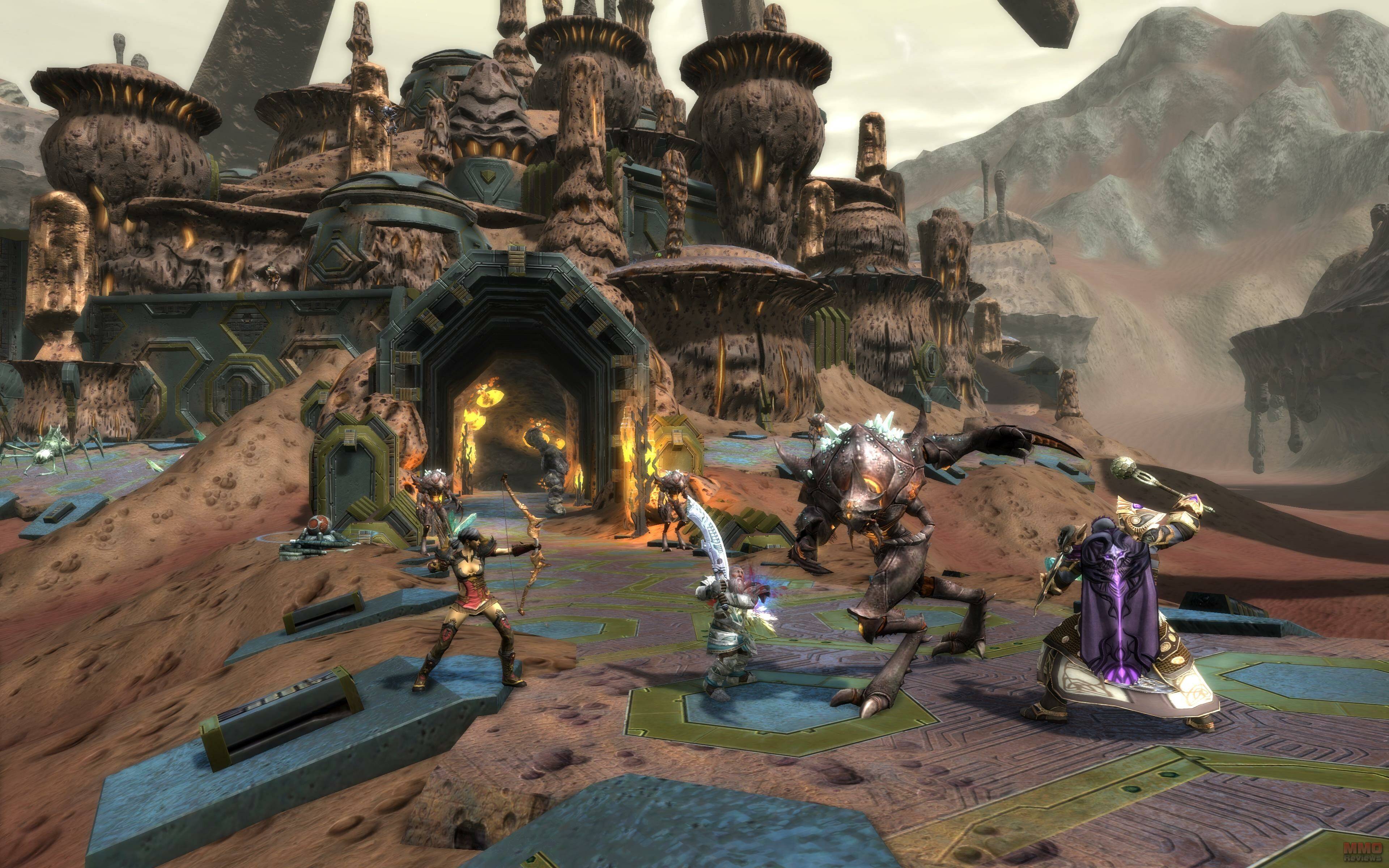 The game is a free-to-play Massive Multiplayer Online Role Playing Game or MMORPG set in the world of Telara where eight primal forces battle for control in an ever-changing world. Players can build their own class using the Ascended Soul system and embark on epic conflicts that bring them into the story, taking their RPG experience to new heights of achievement and excitement.

Recently switched to free-to-play, RIFT features an expansive in-game store with a huge variety of items and services in exchange for credits that can be bought for real money. Available items in the shop range from mounts, gear, companion pets, bag slots, XP boosts, services from faction changes to weapon transmogs, and more. The game is not pay-to-win as the best items in the game will always have to be earned by playing.

Telara is a world entirely constructed of sourcestone that boasts incredible diversity and wealth. Its resources are capable of providing its people endless prosperity, if only they could share the wealth and keep the world safe from those who would plunder it. Though Telara always knew its share of strife, the Blood Storm and the rifts brought entire new plateaus of horror, leading to the edge of oblivion.

Rifts - Rifts, tears in the fabric of reality, erupt where the elemental planes of existence collide with Telara, creating a doorway for invasion, a portal for otherworldly armies bent on conquest and destruction. In those zones, players are presented with mighty thralls of the dragon gods and sworn enemies of the Ascended.

Instant adventures - Instant adventures offer epic action and endless loot for all kinds of player, no matter if they are still levelling or are endgame players. When queuing, they will be whisked straight to enemies and objectives that scale to their party size.

PvP - Players may join the fray in their choice of instanced warfronts, on the massive three-faction battlefields of Conquest, or across the open world. Battling other Ascended, they will earn XP, currency, gear, and glory.

Players can choose six playable races in RIFT, each with a major and distinctive impact on the history of Telara. Choosing a race will grant unique abilities to the player’s character and align them with one of two warring factions, Defiant or Guardian. While the Defiant believe salvation lies in the development and application of sourcestone-fuelled technologies the Guardians put their faith in the Vigil, the ancient gods of Telara,

Mathosians - Once rulers of the North, the Mathosians were undone by a civil war. Most Mathosians fought, and most who fought died, together, in a magical disaster known as the Shade. Now the survivors and their resurrected brethren strive with the Guardians for atonement and revenge.

Kalari - Long ago, the Kelari Elves split with Tavril and settled on lush Ember Isle where they were free to worship elemental spirits old and new. When the Blood Storm corrupted their temples and tainted their demigods, the Kelari fled to Freemarch. Now, they add their considerable skills to the ranks of the Defiant.

Dwarves - The Dwarves built the first cities and were the first enchanters and blacksmiths. They produced dark miracles of craftsmanship, and fought and died for Mathosia. Now, they swing hammer and axe as Guardians, fighting the planar invaders who would rule Telara.

Bahmi - During the Blood Storm wars, the Bahmi’s elemental ancestors arrived on Telara through a rift from the Plane of Air. They proved invaluable warriors and helped turn the fight against the dragon gods. Today, the Bahmi are known for their wisdom and hospitality as well as for their strength in battle.

Eth - Once a nomadic people, the Eth rose to pre-eminence by harnessing the power of sourcestone. They erected an empire of city-states and took magitech to new heights, only to scuttle their advancements lest they fall into the grasp of the Blood Storm. Now, what remains of their discoveries are sought by Ascended across Telara.

High Elves - Blessed by long life and an affinity for the land, the Elves once communed with the gods who appointed them stewards of Telara and its peoples. Those who still hold to their task are called High Elves, and work as Guardians to enforce Tavril’s will with arrow’s sting and arcane wrath.

Players can draw on the souls (and powers) of champions from Telara’s past, becoming the Ascended, grouped in four callings based on shared experiences and traits. Each soul is represented by a unique soul tree. As their character levels up, players earn Soul Points to spend on their soul trees’ unique abilities and traits to grant new skills to their character and open higher-tier abilities.

The four available callings in RIFT are the following:

Rogue - Rogues are known for quick blades and deadly poisons, as masters of bow and beasts, for sabotage, sorcery, and songs of healing and inspiration. Or they avoid being known at all, living between shadows until the moment is right.

Warrior - Clad with the heaviest armour and weapons, warriors cleave their way to the heart of battles and excel when fighting toe-to-toe with the forces of chaos, from the lowliest goblin to Regulos, god of Death.